The Commander-in-Chief of Dubai Police, Lieutenant-General Abdullah Khalifa Al Marri, inspected the Dubai Police stand at GITEX Week 2021, accompanied by Mattar Al Tayer, Director-General and Chairman of the Board of Executive Directors of the Roads and Transport Authority, Secretary-General of the Executive Council of Dubai Abdullah Al Basti, and Attorney General of the Emirate of Dubai. 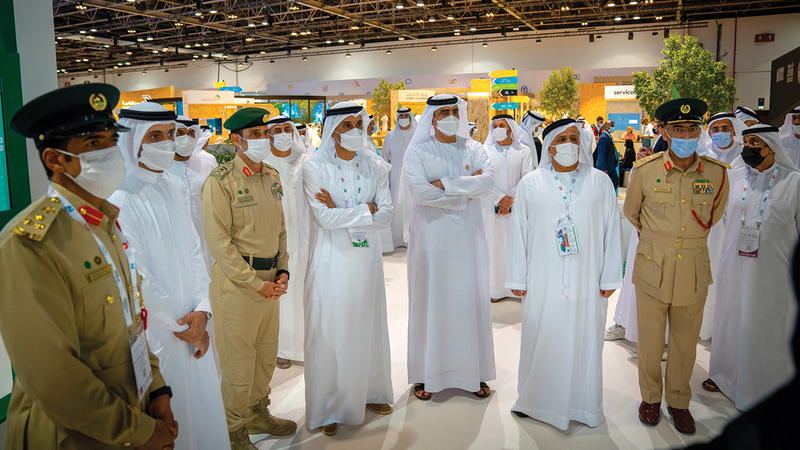 Al-Marri: The program comes within the framework of supporting digital transformation and improving the quality of services

Al Marri during his inspection of the Dubai Police stand at GITEX 2021.

The Commander-in-Chief of Dubai Police, Lieutenant-General Abdullah Khalifa Al Marri, inspected the Dubai Police stand at GITEX Week 2021, accompanied by Mattar Al Tayer, Director-General and Chairman of the Board of Executive Directors of the Roads and Transport Authority, Secretary-General of the Executive Council of Dubai, Abdullah Al Basti, and Attorney General of Dubai, Counselor Issam Issa Humaidan, The Director General of the General Directorate of Residency and Foreigners Affairs, Lieutenant-General Mohammed Ahmed Al Marri, and the Director General of the Dubai Health Authority, Awad Saghir Al Ketbi.

On the first day of the "GITEX Technology Week", the platform displays its latest innovations and smart applications aimed at achieving strategic directions in the happiness of community members, and for "Dubai to be a safe city", in addition to displaying other qualitative smart services. Al Marri also launched the strategic foresight program and the simulation game, among 15 smart services and patrols offered by Dubai Police on its platform, stressing that these services come as part of their permanent efforts to support the digital transformation process and improve the quality of services they provide to the public in accordance with the government's aspirations to reach a safe and sustainable city.

The Dubai Police General Command offers 15 services on its platform, including the strategic foresight program provided by the Center for Future Foresight and Decision Support, and developed by a fully national team, which is an intelligent system for foresight operations, based on artificial intelligence and machine learning techniques to monitor and analyze information from reliable global sites. Such as research centers, innovation laboratories and police sites, and it is fed with trends and challenges in various fields by analysts, to provide an objective perception of events quickly.

The system aims to provide decision-makers with analytical reports and global developments that contribute to decision-making, drawing up future security policies, and contributing to the development of security scenarios for events and risks.

The program is characterized by the possibility of training or the work of analysts in it remotely if necessary.

The center also offers a simulation game, which is one of the foresight tools that Dubai Police have turned into a smart application, with the aim of developing scenarios that support foreseeing the security future.

The Dubai Police platform also showcased video card cameras, the found and lost system, the Expo 2020 adventure game, the offender game, the smart police station, the digital research and studies platform, the pedestrian crossings monitoring device, the smart inquiry, the virtual machine for police dogs, the Sail Safely service, and the website. Dubai Police, the Dubai Police smart application, in addition to the display of the luxurious Aston Martin Vantage.