Dingxi, Gansu, to build a green potato base, "connecting villages into pieces" to promote modern silk road agriculture in cold and drought

China News Service, Lanzhou, October 16 (Zhang Jing) In late autumn, Xiaochakou Village ushered in the potato harvesting season. Following the direction of the harvester, the ground ridges were piled with fresh potatoes that were just turned out. The existence of several potato combine harvesters has liberated the human labor that was originally dominated by potato farmers. This change has impro 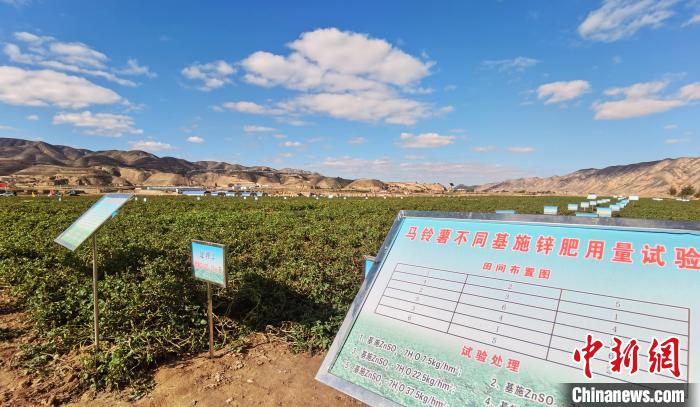 Following the direction of the harvester, the ground ridges were piled with fresh potatoes that were just turned out. The existence of several potato combine harvesters has liberated the human labor that was originally dominated by potato farmers. This change has improved operational efficiency.

Xiaochakou Village is located in Lujiagou Town, Anding District, Dingxi City, Gansu Province. The fields are concentrated with new technologies in the potato industry such as virus-free seeds, black film mulching, formula fertilization, and agricultural machinery farming. The demonstration of new potato varieties and technologies jointly carried out by Lanzhou Jiaotong University and Gansu Academy of Agricultural Sciences has made this a field of hope.

Li Jiming, director of the Agricultural Technology Station of the Anding District Agriculture and Rural Bureau, said in an interview with a reporter from Chinanews.com that this is also a 10,000-mu potato green standardization demonstration base in Anding District. The base construction is related to the promotion of dry farming technology, the construction of high-standard farmland, and the restoration of cultivated land. The combination of fallow and abandoned land remediation breaks the boundaries of townships and villages. The rectification area and the whole mountain system establish a standardized planting base that "connects towns and villages"; distinguishes different towns, different villages, differences in social conditions and industrial realities, and further explores the increase, Expand the area.

Dingxi City is one of the best potato growing areas in China and even the world. Potatoes have been grown there for more than 200 years.

In the experimental field of Xiaochakou Village, there was also an important experiment, namely mechanized planting and combined harvesting.

Statistics show that the mechanized potato harvest rate in Dingxi City has reached 59.7%.

At the just-concluded 2021 China Dingxi Potato Conference, Dai Chao, secretary of the Dingxi Municipal Party Committee, said that if the city is to be modernized, agriculture must first be modernized. Among them, the potato industry must be the first to realize modernization.

The above-mentioned "Three-Year Action to Multiply the Advantages of Modern Silk Road Agriculture in Cold and Dry Agriculture" is a new journey for Gansu to start the development of agricultural modernization.

Specifically, it is to adhere to regional layout, standardized production, large-scale planting and breeding, intensive processing, brand marketing, and technological upgrading, and strive to build bases, strong leaders, extend chains, educational parks, clusters, and create brands. It will take about 3 years to realize the quality improvement, scale expansion, and benefit doubling of the advantageous and characteristic industries.

Sun Wei, deputy secretary of the Gansu Provincial Party Committee, said that through the implementation of the three-year potato doubling action plan, the province will rely on the two national platforms of the national potato modern agricultural demonstration park and the national potato wholesale market to promote the potato industry in the "cross-county". Take a faster and more solid step towards the large-scale, intensive and modernization of the “belt” and “cluster and chain”, and strive to reach 13 million mu of potato planting in the province by 2023, and the output value of the entire industry chain to reach 40 billion yuan by 2025. The planting area has reached 15 million mu, and the output value of the entire industry chain has reached 50 billion yuan.