The global conspiracy of economic recovery after the "epidemic": How can new finance breed new opportunities? 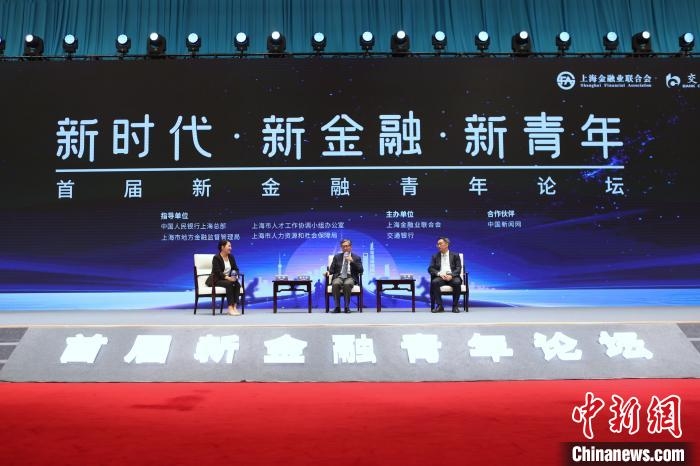 In the post-epidemic era, what new changes will the global economy face?

As an international financial center, how will Shanghai lead China's financial industry to meet challenges and achieve high-quality opening up?

At the first New Finance Youth Forum held on October 15th, the guests pointed out that the current superposition of the new crown epidemic and the anti-globalization dynamics of some major western economies has made the global economy still in a cold winter, and the international community’s efforts Cooperation and the innovative development of green finance and technology finance will become "opportunities" in the "crisis" of economic recovery.

New changes in the world economy: where are the opportunities for recovery?

On the 15th, the first New Finance Youth Forum was held in Shanghai.

The picture shows the scene of the round table dialogue session.

Tu Guangshao, member of the National Committee of the Chinese People’s Political Consultative Conference and chairman of the Shanghai New Finance Research Institute, said that the volume of global trade and investment has been declining in the past two to three years. Frontierism, protectionism, etc. have formed the big dynamics of anti-globalization.

Tu Guangshao said that despite the headwinds of globalization, China's opening to the outside world, especially the opening of the financial industry, is accelerating, forming a new atmosphere. "The opening of China's financial market is also an important support for the development of the global financial system."

Howard Marks, the founder and co-chairman of Oaktree Capital, gave a video speech at the first New Finance Youth Forum on the 15th.

Howard Marks, founder and co-chairman of Oaktree Capital of the United States, believes that under the impact of such a severe epidemic, "China has continuously introduced financial reform and opening up measures, successfully coping with the impact of internal and external risks, and ensuring the stable operation of the financial system."

"Cooperation is still the main theme" became the consensus at the meeting.

Liu Jun, President of the Bank of Communications, pointed out that even with the resurgence of anti-globalization, the global supply chain is still playing an irreplaceable role during the epidemic. “Globalization has brought improvements to everyone’s well-being, but it was just the theme of the first half. It is wealth creation, and the second half is wealth creation and fair distribution in parallel."

Therefore, Liu Jun believes that creation, openness, coordination, greenness, and sharing are the main keynotes of the next step of development. This requires that financial development must be low-energy consumption. In the digital age, “only the global interconnection is big data. This is the future direction of the digital economy and green finance."

Zhu Xian, Vice Chairman and Secretary-General of the International Finance Forum (IFF) and former Vice President of the World Bank, also pointed out that although there are still many uncertainties in the global economy, the economic recovery after the epidemic will also provide emerging market economies and developing countries. Transformation opportunities for greener and sustainable development.

Zhu Xian suggested that some sustainable development projects may be appropriately invested in advance, vigorously promote green finance, and promote a green and intelligent economic recovery.

China's development of new finance: how does Shanghai play?

Cui Bingwen, vice president of Shanghai Pudong Development Bank, pointed out that the so-called new finance refers to emerging business directions such as wealth management; the second refers to new factor trading markets such as carbon emissions; and the third is the application of digital technology for management, risk control, and cooperation. Provide new opportunities; fourth refers to the high-quality development brought about by the new development concept.

Tu Guangshao noticed that in the “14th Five-Year Plan” for the construction of Shanghai’s international financial center, greening and digitization have been added to the traditional marketization, internationalization, and rule of law in the past, which precisely reflects the new changes in the development of new finance. new trend.

Technology is the soul of new finance.

Wang Yunfeng said that digital financial technology has played a key role in the success or failure of financial institutions, and Shanghai’s abundant financial talents are an important reason for more foreign financial institutions to settle here. “For example, HSBC will focus on wealth management in the next five or six years. Development strategy, this business requires compound emerging talents with financial, technological, and communication skills. This prompted us to establish the first foreign-funded financial technology company in Lingang."

Ren Deqi, chairman of the Shanghai Financial Industry Federation and chairman of the Bank of Communications, pointed out that financial institutions should actively connect with the strategy of strengthening the country with talents in the new era, give full play to their capital and information advantages, and build platforms for talent, technology, and project exchanges and innovations.

The data shows that there are currently about 470,000 financial employees in Shanghai, who are generally younger and highly educated.

Nearly 30% of returned financial talents choose Shanghai as their preferred place of work, ranking first in the country.

Wu Qing, member of the Standing Committee of the Shanghai Municipal Party Committee and Vice Mayor, delivered a speech.

Wu Qing, the deputy mayor of Shanghai, stated that during the "14th Five-Year Plan" period, Shanghai will be committed to building "two centers"-a global asset management center, a financial technology center, and "two hubs"-an international green finance hub, and a cross-border renminbi The use of hubs, "two heights"-international financial talent highland, high financial business environment, among which the construction of talent highland is the top priority.

"Shanghai has basically built an international financial center commensurate with China's economic strength and the international status of the renminbi. The combination of financial and technological elements has given Shanghai the potential for financial technology development," said Pan Gongsheng, deputy governor of the People's Bank of China and director of the State Administration of Foreign Exchange. Shanghai is at the forefront of reform and opening up. It has the ability to attract talents from home and abroad with a more livable and workable environment and more open and powerful policies to provide the best talent ecological environment for the cultivation of leading talents in financial technology.