One in four construction companies has been forced to stop or delay some of their works due to the sharp increase in the price of raw materials this year, ... 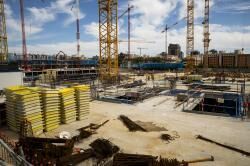 One in four construction companies

has been forced to

some of their works due to the sharp increase in the price of raw materials this year, according to a survey carried out by the National Construction Confederation (CNC) in which they have participated. some 300 companies in the sector.

The constant price increase is caused by the

shortage of products that come from China.

According to the survey, three out of four construction companies have suffered from this shortage of raw materials, mainly

The delays represent an

extra cost for the companies,

so that 24% of the companies that have had to cancel works have had to bear a financial penalty. The cancellation or delay has caused these companies an economic hole of between

The increase in raw material prices has

raised the total cost of works in Spain by 22%.

The president of the CNC, Pedro Fernández Alén, has insisted on three proposals to mitigate this problem: repeal the deindexation law in relation to public contracts, establish an automatic price rebalancing system against cost overruns, and streamline the management of European funds. .

According to the study,

For this reason, more than half of the works have suffered delays in their execution, although 52% have not seen their deadlines altered.

Alén remarked this Friday that the only thing the sector wants is to pay the price at which raw materials are now.

The true investment of the Spanish cloud business: IBM, Microsoft and Google do not build, Amazon suffers to sign and everyone is afraid of the light