The pig price is dragged down! The agency predicts that the CPI will rise 0.8% year-on-year in September, the same as the previous month

China-Singapore Jingwei, October 14 (Xiong Jiali) Today (14th) morning, the National Bureau of Statistics will announce the Consumer Price Index (CPI) for September 2021. The average forecast of multiple institutions shows that the CPI rose 0.8% year-on-year in September, the same as in August.   In January 2021, due to the "wrong month of the Spring Festival", the year-on-year increase in CPI 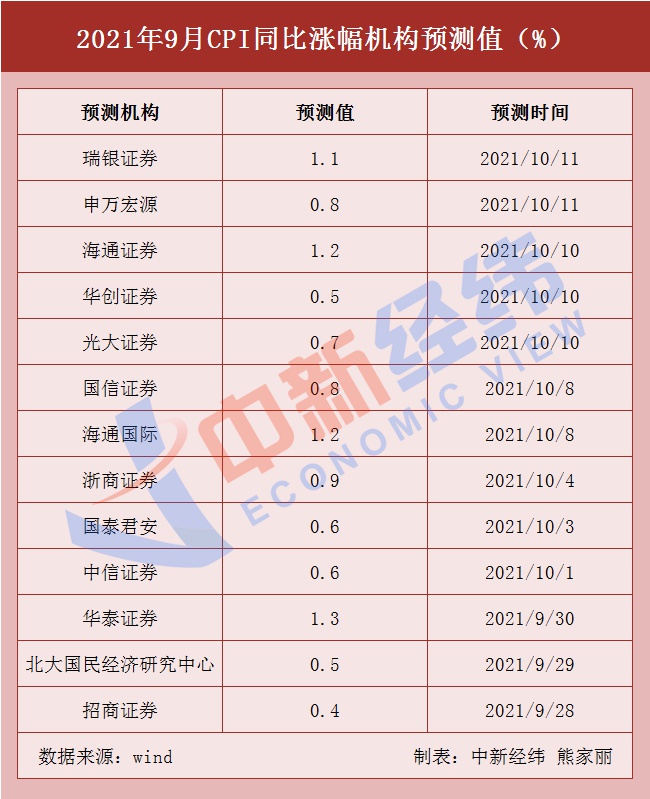 The average forecast of multiple institutions shows that the CPI rose 0.8% year-on-year in September, the same as in August.

In January 2021, due to the "wrong month of the Spring Festival", the year-on-year increase in CPI has changed from an increase to a decrease, and it has risen continuously for the next four months, increasing to 1.3% in May.

For the upcoming September CPI data, Wind data shows that as of October 13, 13 institutions predicted an average of 0.8%.

Among them, the maximum predicted value is 1.3% of Huatai Securities, and the minimum value is 0.4% of China Merchants Securities.

Pork prices have a significant impact on CPI

Everbright Futures analysts said that the CPI in August increased by 0.8% year-on-year, and the continued decline in pork prices had a significant impact on the CPI.

It is expected that the year-on-year changes in pork prices will remain at a low level of -50% to -60% before the first quarter of 2022. During this time period, the weakness of pork prices will continue to drag down the trend of CPI.

According to data released by the Ministry of Agriculture and Rural Affairs, the wholesale price of pork in September 2021 decreased by 6.87% from August to 19.94 yuan/kg.

In the medium term, the stock of reproductive sows has declined rapidly for two consecutive months, and this round of pig cycle may bottom out in mid-2022.

In the long run, the Ministry of Agriculture and Rural Affairs has recently issued the "Implementation Plan for Pig Production Capacity Regulation (Interim)", which refines the production capacity targets of various regions, which is good for large-scale breeding, or will reduce the fluctuation of the pig cycle.

He said that this year's household consumption is generally weak, terminal consumer goods and services are adequately supplied, and competition is fierce. Therefore, prices are running weakly.

The price of superimposed pigs is in a fall cycle, and the CPI has been running at a low level.

At present, the stock of live pigs is still picking up, and pig prices will still fluctuate at low levels during the year, suppressing the upward trend of food CPI.

Huang Wentao believes that the year-on-year growth rate of CPI will gradually rise in September-November due to the low base effect, and it will fall again in December, and the fourth quarter is generally moderate.

Guojin Securities said that on the one hand, the lack of improvement in consumption means that the upside of core CPI is limited; on the other hand, the drag of pork prices on the food sub-item is expected to alleviate, and the overall CPI is expected to fluctuate.

According to the analysis of the Caixin International Economic Research Institute, the repair of the service industry and price transmission will drive the recovery of the CPI center, but the disturbance of the epidemic situation, the slow recovery of consumption, and the drag of pork still remain. The overall CPI inflation in the fourth quarter is moderate, and the center is expected to be at the center for the whole year. 1" era.

Everbright Futures believes that the CPI will not rise significantly before the first quarter of next year.

Everbright Futures said that in the first half of this year, the unexpected recovery of live pig inventory and slaughter data caused pig prices to continue to fall. In late June, the entire pig breeding industry entered a loss-making stage.

With the recovery of stocks exceeding expectations and the downstream demand not being effectively released, pig prices are under pressure to rebound. At present, pig prices have fallen to the starting point of this round of the pig cycle, and the proportion of pork consumption in total household consumption is unlikely to appear to be large in the short term. The upward adjustment is based on the relatively high weight of pork consumption in the CPI index, and it is expected that there will be no conditions for a significant increase in the CPI before the first quarter of next year.

Huang Wentao predicts that the CPI center will rise slightly next year.