China News Service, Changsha, October 11 (Reporter Fu Yu) "China (Hunan) Pilot Free Trade Zone Changsha Area Construction Effectiveness Evaluation Report for the First Anniversary" was announced on the 11th. According to the report, since the first anniversary of the establishment of the Changsha area of ​​Hunan Free Trade Zone, more than 30 institutional innovations have been formed, 12 of whic 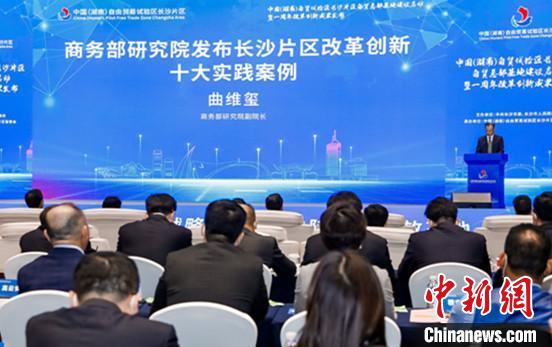 According to the report, since the first anniversary of the establishment of the Changsha area of ​​Hunan Free Trade Zone, more than 30 institutional innovations have been formed, 12 of which are national firsts.

In the past year, the Changsha area has adhered to the strategic positioning of “building a global high-end equipment manufacturing base, a high-end modern service industry center in inland areas, a pioneer zone for in-depth economic and trade cooperation between China and Africa, and a rising growth pole in the central region”. The implementation rate of 113 reform tasks reached 85.8%, and the implementation rate of 309 implementation measures reached 93.2%.

The 278 system innovation experiences and best practice cases required by the state to be replicated and promoted have a completion rate of 78.6%, and the construction and development of the area has achieved initial results.

The report pointed out that in the past year, the Changsha area has made many breakthroughs in the first case, the first China-Africa barter trade was successfully completed, and Africa's first non-resource product Rwanda dried chili was allowed to enter the market; released the country's first cross-border e-commerce professional talent evaluation Standardize, build the first standardized industrial cluster area in China, "Furong Standardized Town"; realize one-stop customs clearance for three types of international mail, international express mail, and cross-border e-commerce, and increase the average daily processing capacity by 6 times.

There are rich results in the exploration of differences, such as the creation of a new model for digital transformation of manufacturing enterprises, the number of application scenarios of "5G + Industrial Internet" ranked first in Hunan Province; the establishment of an integrated promotion system for China-Africa economic and trade "politics, research and business", and the establishment of "offline" "Display + online trading" dual platforms to build a supply chain for direct sourcing of non-resource products in Africa.

The Research Institute of the Ministry of Commerce released ten practical cases of reform and innovation in the Changsha area.

In terms of open development, the first and second phases of the China-Africa Economic and Trade Cooperation Promotion Innovation Demonstration Park were built and used in Changsha, Africa’s "One Country, One Product" Pavilion, "Changzhutan Integrated Branded Products Export Exhibition and Sales" Pavilion, and China-Africa cross-border e-commerce live broadcast The base and other operations started, and the three major African non-resource product processing centers for cocoa, coffee, and nuts were built.

The radiation effect of functional platforms such as the International Financial Port, International Talent Port, and Huanghua Digital Trade Port has continued to increase.

Over the past year, the Changsha area has accumulatively added 12,000 market players and 3747 enterprises; 74 newly introduced projects with a total investment of 175.13 billion yuan, including 13 of the top 500 projects in the three categories.

At present, the area has realized an import and export volume of 71.282 billion yuan.

Over the past year, the Changsha area has accelerated its efficiency improvement and optimized the business environment in the advanced benchmarking process.

For example, the launch of 40 free trade "one thing once" packages, promoting the implementation of 25 minimalist approval items; realizing the "three certificates in one" of construction projects, the "start of construction when land is acquired" for social investment projects, and the approval of conventions and exhibitions. Station-type integrated services; a large number of enterprise-related reforms such as "one industry, one certificate", "acceptance of vacancies", "information and commitment system" and other enterprise-related reforms were first implemented in the area.

In terms of policy support, 21 supporting policies including talents, scientific research, industry, and openness have been introduced successively, and a comprehensive policy system has been established.

For qualified high-level talents, the part of personal income tax exceeding 15% will be fully subsidized.

At the event site, 10 major projects with a total investment of 18.3 billion yuan were signed.