Reform allows foreign trade companies to "load light and move fast"   Our reporter Gu Yang Transport vehicles transfer containers at the container terminal of Lianyungang Port, Jiangsu.   Photo by Wang Chun (issued by Xinhua News Agency)   "Since the registration of customs declaration enterprises was changed from licensing to filing, there have been 1,238 newly registered customs declaratio 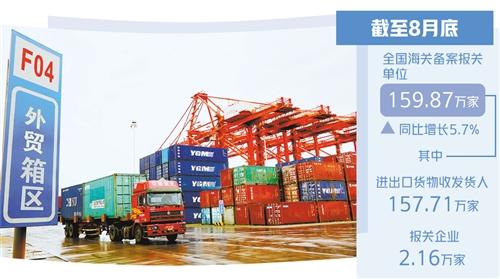 "Since the registration of customs declaration enterprises was changed from licensing to filing, there have been 1,238 newly registered customs declaration enterprises nationwide, an increase of 22.5% year-on-year." Wang Sheng, director of the Enterprise Management and Inspection Department of the General Administration of Customs, said in an interview with a reporter from the Economic Daily a few days ago.

Focusing on this reform, the Customs has accelerated the promotion of the project for the convenience of the people and enterprises, and introduced measures such as "full-process network management and nationwide management", which are welcomed by the majority of enterprises.

At present, customs brokers can log in to the "single window" or "Internet + Customs" at any location across the country to submit a filing application. After the local customs has reviewed and settled, they can print the filing receipt by themselves, and the entire process is paperless online, which truly realizes the enterprise's zero Run errands and zero cost" "Apply anywhere, once."

As of the end of August, there were 1.5987 million customs filing and declaration entities across the country, a year-on-year increase of 5.7%.

Wang Sheng said that the General Administration of Customs, focusing on countries related to the “Belt and Road”, member states of the Regional Comprehensive Economic Partnership (RCEP), Central and Eastern European countries, and important trading countries, is making every effort to promote the process of mutual recognition and cooperation.

As of the end of August this year, China Customs has signed AEO mutual recognition arrangements (agreements) with 46 countries or regions in 20 economies including Singapore, South Korea, and the European Union. The number of mutually recognized countries or regions ranks first in the world.

China's AEO companies (advanced certification companies) account for about 60% of their total imports and exports to countries or regions that recognize the AEO mutual recognition.

Since last year, the General Administration of Customs has launched a pilot reform of enterprise group processing trade supervision. A series of measures have improved production efficiency, ensured the stability of the supply chain, and at the same time reduced the burden on enterprises and released reform dividends.

The comprehensive promotion and implementation of the "Cross-border e-commerce retail import return center warehouse model" is one of the latest reform measures launched.

In this mode, domestic agents of cross-border e-commerce companies or storage companies in special customs supervision areas entrusted by them can set up special storage locations for cross-border e-commerce retail imported goods in the area to receive and sort the returned goods. It is carried out in the special customs supervision area.

According to the company's calculations, this model can reduce the overall return time by 5 to 10 days on average, alleviating the 45-day pressure on the return arrival time of cross-border e-commerce imports.

In addition, the customs will actively explore big data and intelligence, research and implement "Internet + audit", and implement invisible supervision.