In Iraqi Kurdistan, the fate of 81 political prisoners ignored

Less than a week before the Iraqi legislative elections, Kurdistan is witnessing an increase in demonstrations, some of which call for the release of 81 journalists and members of society ... 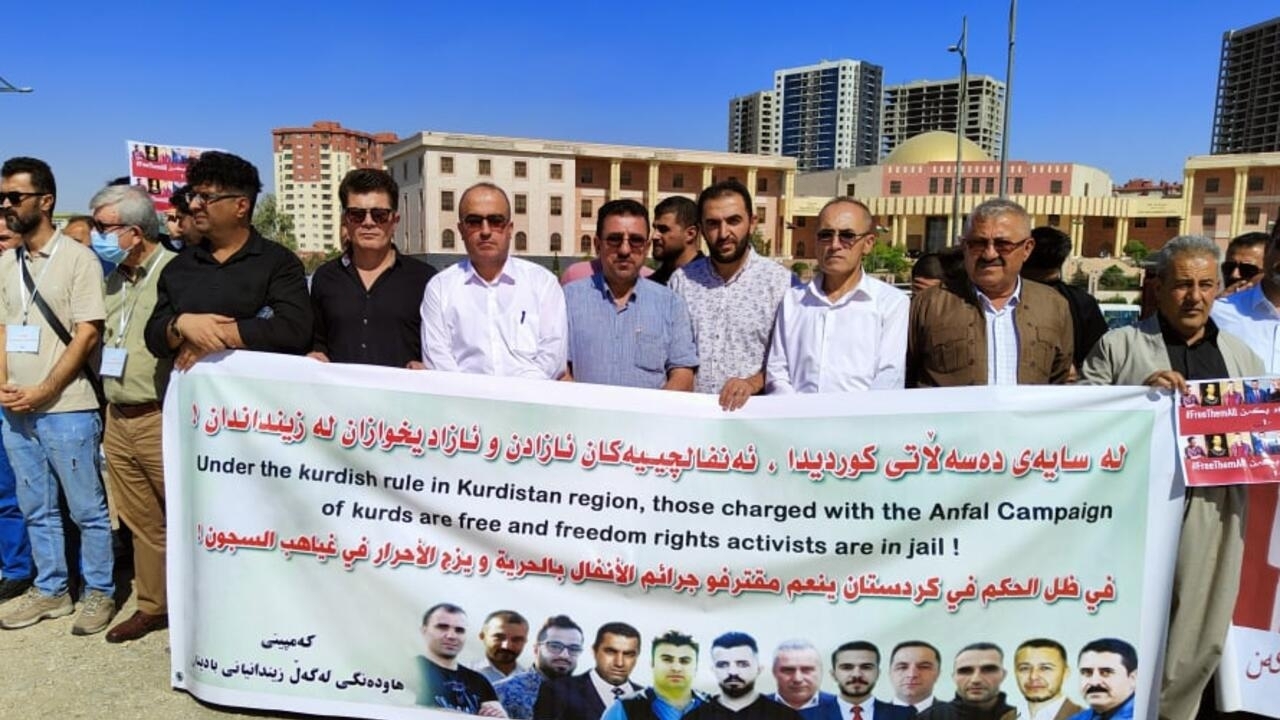 In Iraqi Kurdistan, the fate of 81 political prisoners ignored

Five journalists are behind bars in Iraqi Kurdistan.

Less than a week before the Iraqi legislative elections, Kurdistan is seeing an increase in demonstrations, including some calling for the release of 81 journalists and members of civil society detained for more than a year without trial.

They have become the face of a policy of intimidation carried out for years by the authorities of Iraqi Kurdistan. Eighty-one men, far too many to ignore. However, for more than a year, these journalists, human rights defenders and ordinary citizens have been waiting to be tried in the jails of the security forces of Iraqi Kurdistan. Among the charges against them, acts of espionage and endangering the security of the region. For a month, they have been on hunger strike. They demand access to a lawyer and denounce the use of torture.

Monday, October 4, four of them had to go to court.

Their hearing was postponed once again, as at each of the appointments set by the Kurdish justice.

Officially, the judges dealing with the case were removed from the case and were therefore not available.

But for the Defendants Support Committee, it is clear that there is not enough evidence to convict them as the authorities would like.

The relatives of the accused had also anticipated this postponement and called for demonstrations in front of the courts of all the cities of Kurdistan.

Thus from Kalar to Dohuk via Souleymanieh and Erbil, men and women gathered on Monday before the courts of the region.

The demonstrators called for the release of the "81 of Badinan", prisoners who had no - or very little - access to their lawyer.

These people come from the Badinan region, it is the center of power of the PDK, the political party which rules a large part of Kurdistan,"

They dared to criticize the government in the heart of power, to expose corruption and secret prisons in the area.

That is why they are targeted, but the government does not say so.

They say they are saboteurs and spies and that is why they were arrested.

In reality, it gives them an excuse to keep them in jail indefinitely

Sentenced before being tried

Badinan is indeed the stronghold of the Barzani family, at the head of the PDK. A region where the control of freedom of expression is even more severe than in the capital of the Erbil region. Many journalists have been killed there in recent years. Among the disappearances denounced by NGOs such as

, that of Shukri Zaynadin, found dead in 2016. His son is one of the 81 in Badinan, he is one of the few to have already been sentenced to seven years' imprisonment. prison without official charge. Like his father, he is a journalist and was arrested after publishing information critical of the government.

In the ranks of the demonstrators, the name of Masrour Barzani, the Prime Minister of the Iraqi Kurdistan region and former head of the dreaded security services of Kurdistan, often comes up.

During a press conference, even before the opening of the trial of the first defendants, he affirmed that the latter were "

neither journalists nor activists."

Some work for foreign spy agencies, others were armed and preparing to blow up buildings, attack foreign citizens, kidnap people and destabilize the region ”.

, the first five to go to court were sentenced to six years in prison.

Silence of the international community

Among these five convicts, the journalist Sherwan Sherwani.

He appeared very weak at his trial, barely standing.

He claimed to have been tortured.

The security forces also reportedly threatened to rape his wife if he did not admit her guilt.

He is one of the men accused of spying in the service of Germany, the United Kingdom and France.

He appears in a photo to members of European diplomacy since he is a recognized figure of civil society in Kurdistan.

Kamaran Osman, who works for the Christian Peacemaker Team, says his NGO has spoken to these consulates.

But other than a conviction on social media, they didn't do anything.

However, they are themselves accused of espionage via the prisoners of Badinan

Despite the intensification of arrests and a campaign of intimidation against their own people, the regional authorities of Iraqi Kurdistan continue to be treated as stable friends in a changing area. They are also often presented as defenders of human rights in the Middle East. "

If the president of the region really defends freedom of expression, he comes to attend the hearings,

. I would like them to come and see the truth with their own eyes. The president must pardon those who have been convicted and those who are awaiting trial. We won't go home until they do.

Badel Barwari was arrested in August 2020, his trial has been postponed several times.

The next hearing is scheduled for October 12.

According to his family, he has lost 50 kilograms and shows obvious signs of physical and psychological torture.

Since last August, he has only been able to see his relatives twice for 5 minutes in the presence of armed members of the security forces.

Containing anger before the elections

This Monday, the demonstrators also accused the authorities of postponing the trials in order to avoid the anger of the streets before the Iraqi legislative elections scheduled for Sunday. In much of the Kurdish region, the PDK has consistently won, but year after year the anger against authorities accused of corruption and authoritarianism has only accumulated. The weight of the two big Kurdish parties in the Iraqi national parliament could therefore be reduced.

Despite all his crimes and despite the dictatorship, Saddam Hussein himself did not take more than six months to judge people. Here, they have been waiting for 14 months to be judged, we can't take it anymore!

», Shouted a demonstrator on Monday in Erbil also calling on the Kurdish deputies to mobilize. Several deputies from opposition parties appeared alongside the demonstrators on Monday. They too accuse Prime Minister Masrour Barzani of using justice to silence the voice of the people.

This week other demonstrations are taking place in Iraqi Kurdistan to denounce once again the lack of water and electricity as well as the non-payment of civil servants' salaries.

On social networks, many voices are calling for a blank vote in the legislative elections on Sunday, October 10.

Boycotting will not be enough, because the main Kurdish parties, the PDK and the PUK, are accused of fraud and suspected of stealing the votes of abstainers.