Ministry of Commerce: It is expected that auto sales for the whole year of this year are expected to achieve positive growth

China News Service, September 26, Wang Bin, deputy director of the Department of Consumption Promotion of the Ministry of Commerce, said on the 26th that "the recent growth rate of new car sales has continued to decline" and said that comprehensive research and judgment is expected to achieve positive growth in car sales this year. A situation of continuous decline for three consecutive years. 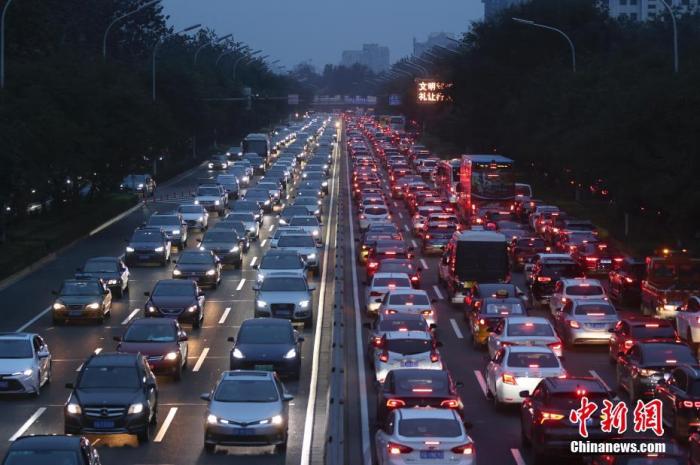 China News Service, September 26, Wang Bin, deputy director of the Department of Consumption Promotion of the Ministry of Commerce, said on the 26th that "the recent growth rate of new car sales has continued to decline" and said that comprehensive research and judgment is expected to achieve positive growth in car sales this year. A situation of continuous decline for three consecutive years.

The picture shows vehicles lining up slowly on the main road of the East Second Ring Road in Beijing.

Wang Bin introduced that the automobile industry is an important pillar industry of the national economy, with a long industrial chain and strong driving efficiency. It is the "big head" of expanding domestic demand and stimulating consumption.

The Ministry of Commerce attaches great importance to the development of the automobile market and consumption. Since the beginning of this year, the "Guidelines for Promoting Automobile Consumption" have been issued to local commercial authorities to promote the transformation of automobile purchase management to use management, encourage the optimization of automobile purchase restriction policies, and work with relevant departments to promote second-hand The registration of car transactions in different places is cross-province, and a new round of new energy vehicles going to the countryside has been organized. Various localities have successively introduced a series of pragmatic measures to promote car consumption.

The automobile market has generally maintained a stable and positive development trend, and all major indicators have exceeded the levels before the epidemic.

First, the sales of new cars have achieved rapid growth.

Second, the sales of new energy vehicles have increased substantially.

From January to August, 1.799 million vehicles were sold, a year-on-year increase of 1.9 times. The proportion of new car sales was close to 11% for the first time. Sales in August continued to set a single-month historical sales record.

In August, the ratio of monthly transaction volume of used cars to new cars reached 0.83, a record high.

According to statistics from relevant parties, the proportion of off-site transactions has increased from 30% to 60%.

The fourth is to accelerate the obsolescence and elimination of old motor vehicles.

Wang Bin also pointed out that my country's monthly new car sales have experienced negative growth for four consecutive months since May, and the decline in August was 5.9% larger than the previous month.

He viewed this phenomenon from three perspectives:

First of all, from a statistical point of view, the domestic new crown epidemic was well controlled during the same period last year, and the country promptly introduced policies and measures to promote automobile consumption. The demand for automobile consumption was released in a concentrated manner, and the base figure rose significantly year-on-year.

Secondly, from the perspective of supply and demand, due to multiple factors such as the spread of the epidemic in August this year and the tightness of auto chips, the production and supply of some hot-selling models, auto parts, and consumer demand have slowed down.

Third, from the perspective of development trends, my country's automobile market has gradually entered a period of steady development after years of rapid growth, affected by factors such as environmental protection, transportation, safety, and income.

Based on comprehensive research and judgment, it is expected that the car sales for the whole year of this year are expected to achieve positive growth, reversing the situation of continuous decline for three consecutive years.

Wang Bin introduced that in the next step, the Ministry of Commerce will thoroughly implement the decisions and deployments of the Party Central Committee and the State Council, and in accordance with the new situation and changes, work with relevant departments to conscientiously complete the whole chain of automobile consumption promotion, and accelerate the construction of tiered consumption, efficient use, and The new development pattern of the green and circular automobile market.

The first is to deepen the reform of decentralization, regulation and service in the automobile circulation field, and promote the introduction of related measures to stimulate the vitality and endogenous power of the automobile market.

The third is to improve the related systems of automobile circulation management, speed up the revision of the "Measures for the Administration of Second-hand Vehicle Circulation" and the "Regulations on Compulsory Motor Vehicle Scrap Standards" to optimize the automobile consumption environment.