The world's attention is directed to the UAE, specifically the Emirate of Dubai, to follow the most prominent event of this year, which is hosting "Expo 2020 Dubai", the first "International Expo" hosted by the Arab region and the Middle East, which is held under the slogan "Connecting Minds and Creating the Future". «Expo 2020 Dubai» 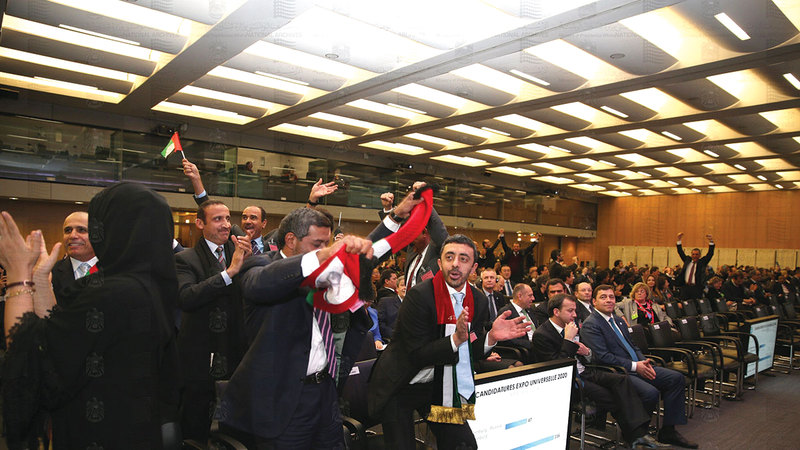 The world's attention is directed to the UAE, specifically the Emirate of Dubai, to follow up on the most prominent event of this year, which is the hosting of "Expo 2020 Dubai", the first international "Expo" hosted by the Arab region and the Middle East, which is held under the slogan "Connecting Minds and Creating the Future".

Dubai's hosting of "Expo 2020 Dubai" came after many successful participations of the UAE in the international exhibitions of the "Expo" in its successive sessions, where the UAE participated in many of them, and its pavilions were able to compete with the pavilions of the major countries participating in those exhibitions, and attract millions of visitors who were keen To be acquainted with the history of the country, and its huge achievements in a short period, to become one of the modern countries, and then a cultural, economic and urban center in the region.

The UAE’s participation in these exhibitions began in 1970, that is, before the establishment of the Union, when Abu Dhabi participated in the “Expo” exhibition that was held in the Japanese city of Osaka, under the slogan “Progress and Concord for the sake of Man.” This event witnessed the unveiling of the “Sun Tower”, And an innovative electric car, as well as a display of a rock from the moon, which was recently brought by the pioneers of the Apollo spacecraft, attracting more than 64 million visitors, which is one of the high numbers in the history of "Expo" so far.

From Spain to Hanover

The first participation of the UAE, after the establishment of the Union, in the international exhibitions «Expo», was in 1992 in the Seville exhibition in Spain, whose theme revolved around the era of discoveries, and lasted for six months, then came participation in the «Expo» Lisbon in 1998, and achieved participation in The Hanover Fair in 2000 had wide positive resonances, and the Emirates pavilion was chosen as one of the first 10 pavilions in the exhibition, and its design was in the form of Al Jahili Castle, which was built by Sheikh Zayed the First in Al Ain in 1898. The exhibition “Man, Nature and Technology on the Other Side”.

The UAE participated in the “Expo” Zaragoza, Spain in 2008, where the UAE pavilion won the gold award, and was the best among the exhibitions of 120 countries. He moved to the Emirates, focusing on its experiences more than 2,000 years ago on fetching drinking water in the aflaj system, and how to distribute it to the population, which was in line with the exhibition’s slogan in that session “Water and Sustainable Development.”

Among the prominent participations of the UAE, its participation in the Expo 2010 Shanghai in China, where the state pavilion was distinguished by a design that simulates the shape of two sand dunes inspired by the desert nature of the UAE, and the height of the highest dune reached 20 meters, as well as its sustainable design, which was developed by the «Company» Foster & Partners’ architectural design, which qualified the pavilion to win several prestigious awards from the Illinois Society of Structural Engineers and the National Council of Structural Engineers Associations.

The UAE’s successes in its participation in the international exhibitions of “Expo” continued, and the country’s pavilion at “Expo Yeosu 2012” won the silver medal in the first category group, in appreciation of its creative presentation. The exhibition, which was held in the coastal city of Yeosu in South Korea, carried the slogan “Oceans and Seashores Alive,” a slogan that is deeply linked to the UAE, which is proud of a rich maritime history, and the UAE pavilion participating in the exhibition reflected the country’s commitment to responsible development and protection of its coasts and natural marine environment.

Milan handed over the flag to Dubai

The UAE participated in the "Expo Milan 2015" in Italy, which was held under the slogan "Feeding the Planet, Energy for Life", in the largest pavilion in the history of the exhibition, as it spanned an area of ​​4,300 square meters, and could accommodate between 7,000 and 7,500 visitors per hour.

The pavilion won the "Best External Design" award, while the National Media Council, which organizes and supervises the country's pavilions at the International Expo, received an honorary certificate from the International Exhibitors magazine in the competition it organized for the best country pavilions and the best entities. The organizers of these pavilions participating in “Expo Milan 2015”, and this exhibition also witnessed the handing over of the flag to the Emirates, after Dubai won the hosting of “Expo 2020”, to be the first event of its kind in the Middle East, Africa and South Asia, after a strong competition in voting with all From Russia's Yekaterinburg, Turkey's Izmir and Brazil's Sao Paulo, Dubai won the support of 116 votes from the 164 members of the International Bureau of Exhibitions, which organizes World Expos, who have the right to vote.

From the Liwa Desert to Astana

The UAE participated in the 2017 Astana Expo in Kazakhstan, which was held under the slogan "Future Energy." Knowledge.

As for the "Expo Beijing 2019", which is one of the international events specialized in horticulture, more than 110 countries and international organizations participated in it, under the slogan "Live a green life, live a better life", and the UAE pavilion highlighted the efforts of the late Sheikh Zayed bin Sultan Al Nahyan, may God have mercy on him, in the development and development of the agricultural sector in the country. The area of ​​the pavilion is about 1,850 square meters, of which 80% are gardens, and 20% are buildings of the total area. He focused on the UAE’s green strategy, its national project for greening the desert, and its achievements and innovations in the agricultural field.

• Abu Dhabi participated in the "Expo", which was held in the Japanese city of Osaka in 1970, under the slogan "Progress and Accord for Humanity".