The commercial registration and licensing sector in the Dubai Economy issued 7,064 licenses immediately, during the first eight months of 2021, at the forefront of which were licenses related to professional activities by 63%, then commercial activities by 37%. 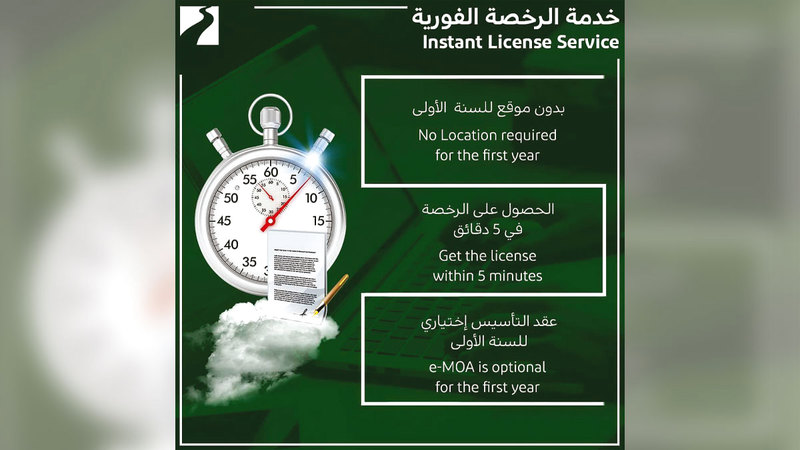 Issuance of the instant license takes 5 minutes on the “Invest in Dubai” platform.

The Dubai Economy indicated, in a report, that according to the main regions in the emirate, the Bur Dubai region acquired the largest share of the immediate licenses issued to new facilities, during the period between January and August of this year, with a total of 4,121 licenses, and then the Deira region with a total of 2,943 licenses.

The report indicated that as for the distribution of these licenses, according to the most prominent sub-regions, they were as follows: Al Fahidi, Al Karama, Burj Khalifa, Al Mankhool, Al Marar, First Trade Center, Naif, Al Nahda First, Al Hebiya First, and Port Said.

The issuance of the instant license comes within the framework of Dubai Economy’s strategy that aims to support the process of economic diversification, sustainable growth and competitiveness in the emirate, as it focuses on facilitating doing business, which contributes to foreseeing and creating a better future in which Dubai is first in the world in the attractiveness of strategic economic sectors, and the provision of superior services Quality according to the highest international standards.

The Instant License initiative contributes to reducing human interaction by automating the licensing procedures, in addition to making it easier to obtain a commercial license.

The initiative ensures that businessmen are allowed to start practicing commercial activity as soon as the license is issued, and then complete the rest of the commercial license requirements, such as approvals from other relevant government agencies.

The instant license service - which takes only five minutes to issue on the invest.dubai.ae platform, with the option to issue an electronic articles of association and a virtual site for the first year - provides a convenient and modular solution for businessmen who can now obtain a commercial license in the shortest time As soon as possible, enabling them to establish and conduct business in Dubai easily and conveniently.

The feature of registering “citizen employees” was added at the Ministry of Human Resources and Emiratisation, when issuing the immediate license.

This comes within the framework of implementing Emiratisation decisions and encouraging the private sector to attract citizens.

The steps for registering “national employees” through the instant license include: pressing “I want to register local workers with the license” when completing the instant license transaction in the electronic services, writing the person’s identity number and pressing “get details,” then verifying the person’s data and mobile number. And click on “Send Approval Request”.

After the text message is approved by the person, the “approvals event” is pressed, and the text message can be sent back or the approval can be deleted from the same screen, then press “Add Person” to add the employee’s data, and finally enter all the data correctly and press “Save” to print Payment authorization.

The instant license provides the option of issuing an electronic articles of incorporation, obtaining the license and commercial register of the company, and membership of the Dubai Chamber, through the same procedure instantly.