Suspected of market manipulation! The private equity tycoon who had been exposed as a shady man was arrested!

Chinanews Client Beijing, September 24th (Reporter Xie Yiguan) In May, Ye Fei, a well-known private equity funder, named a number of listed companies and brokerages to participate in the so-called "market value management" and implemented "settlement". Some funds were even hacked. "Eating the black" became a "receiving man", triggering an "earthquake" in the financial circle.   Today, the "info 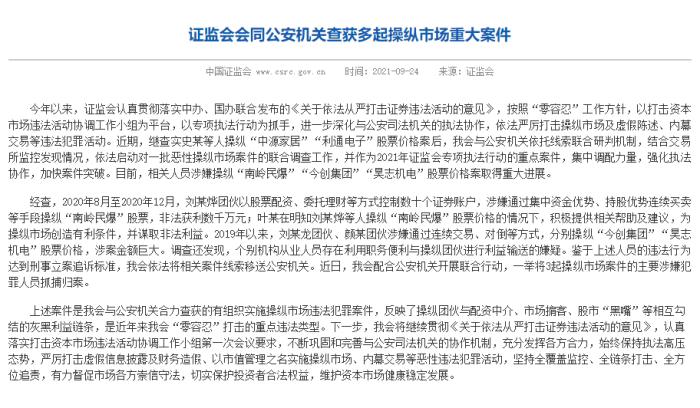 Chinanews Client Beijing, September 24th (Reporter Xie Yiguan) In May, Ye Fei, a well-known private equity funder, named a number of listed companies and brokerages to participate in the so-called "market value management" and implemented "settlement". Some funds were even hacked. "Eating the black" became a "receiving man", triggering an "earthquake" in the financial circle.

Today, the "informer" Ye Fei has also been arrested on suspicion of market manipulation.

According to news from the China Securities Regulatory Commission on the 24th, at present, relevant personnel are suspected of manipulating the stock price of "Nanling Civil Explosion", "Jinchuang Group" and "Haozhi Electromechanical" stock prices have made significant progress.

According to investigations, from August 2020 to December 2020, Liu Mouye’s group controlled dozens of securities accounts by means of stock allocation, entrusted financing, etc., and was suspected of manipulating "Nanling" by means of centralized capital advantage and continuous trading of shares. "Civil Explosive" stocks have illegally made tens of millions of yuan in profits; Ye Mou, knowing that Liu Mouye and others manipulated the price of "Nanling Civic Explosive" stocks, actively provided relevant assistance and suggestions to create favorable conditions for market manipulation, and Seek illegal benefits.

In addition, since 2019, the Liu Molong group and Yan Mo group are suspected of manipulating the stock prices of "Jinchuang Group" and "Haozhi Electromechanical" through continuous trading and counterfeiting, and the amount involved is huge.

The investigation also found that employees of individual institutions are suspected of using their positions to facilitate and manipulate groups to transfer benefits.

In view of the violations of the above-mentioned personnel reaching the standards for criminal prosecution, the China Securities Regulatory Commission transferred clues to the relevant cases to the public security organs in accordance with the law.

Recently, the China Securities Regulatory Commission cooperated with the public security organs to carry out joint operations and arrested the main suspected criminals in three market manipulation cases in one fell swoop.

Combining previous related events and the latest media reports, the aforementioned "Ye" is exactly Ye Fei who broke the news that related companies were suspected of stock manipulation.

According to media reports from brokerage China and other media, Ye Fei has been arrested by the public security organs a few days ago.

In 2015, Ye Fei's "Yitian Yali No. 3" was awarded the semi-annual champion of the National Sunshine Private Equity.

In the same year, Ye Fei was confiscated by the China Securities Regulatory Commission of 6.638 million yuan of illegal gains for manipulating the stock prices of many companies, and fined 19.91 million yuan.

On May 9, Ye Fei released a Weibo stating that in March this year, the trader Pu Feidi entrusted by Zhongyuan Home Furnishing Co., Ltd. found him through an intermediary. The two parties agreed that Ye Fei would help Panfang contact downstream public offering funds and brokerage managers. Funds are managed by market value, and it is agreed that public offering and brokerage asset management will buy Zhongyuan Home Furnishing stocks on March 31, lock the position as agreed, and provide a guarantee deposit, and plan to increase the stock by more than 30%.

However, the subsequent company's stock continued to fall. Pu Feidi not only did not lock the position, but also directly shipped them to them, and refused to pay the guarantee deposit, resulting in losses of several million in public offerings and brokerage asset management.

In addition, in the content of Ye Fei's report, securities firms such as Shenwan Hongyuan Securities, Minsheng Securities, Hengtai Securities, and Tianfeng Securities were also named to participate in the so-called "market value management" incident.

Ye Fei's revelations on the Internet quickly attracted the attention of the regulatory authorities.

On May 14, a spokesperson for the China Securities Regulatory Commission stated that the Shanghai Stock Exchange would start investigating related accounts on May 13, and issued a "Supervisory Work Letter" to the company in the afternoon of the same day, requesting the company to conduct a self-inspection and truthfully disclose the relevant information.

The agency dispatched by the China Securities Regulatory Commission has interviewed the company and related parties and initiated the verification process.

On May 16, the China Securities Regulatory Commission issued another news. In response to recent media reports that related parties were suspected of conspiring to commit illegal acts, the China Securities Regulatory Commission decided to file a case on related accounts for suspected manipulation of the stock prices of Litong Electronics and Zhongyuan Home Furnishing according to the exchange’s verification. survey.

On July 23, the China Securities Regulatory Commission reported that from September 2020 to May 2021, Shi and other manipulating groups controlled dozens of securities accounts and used continuous trading and counterfeiting to promote "Zhongyuan Household" and "Litong". The price of "electronic" stocks has a transaction amount of more than 3 billion yuan, and the relevant acts have reached the standards of criminal prosecution, suspected of constituting a crime of market manipulation.

The investigation also found that individual personnel of relevant financial institutions were suspected of bribery crimes by non-state employees.