Chinanews Client Beijing, September 24 (Zuo Yukun) A few days ago, Harbin announced the itinerary of the first confirmed case of the epidemic. As one of the high-frequency vocabularies, "script killing" was once again "marked" Focus".   This "playing ups and downs" industry has also experienced ups and downs like a script in a short period of time. "Another Life", the script kills explosive gr 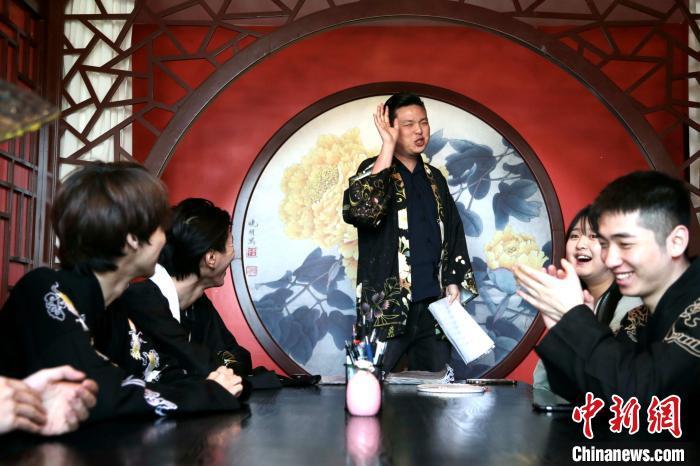 Chinanews Client Beijing, September 24 (Zuo Yukun) A few days ago, Harbin announced the itinerary of the first confirmed case of the epidemic. As one of the high-frequency vocabularies, "script killing" was once again "marked" Focus".

This "playing ups and downs" industry has also experienced ups and downs like a script in a short period of time.

"I'm very curious that the people who play script kills don't have a job? Do you want to spend a few hours to meet together on weekends?" Talk show actor Pang Bo once teased script kills like this.

It is indeed similar to a meeting. The script kills players need to select characters and read the corresponding script, concentrate on reasoning and discussion, and find out the real murderer hidden in the game.

But in the script killing, you are no longer yourself, but play a certain role in a certain time and space through a few hours.

The picture shows the "Script Kill" player in Xi'an.

This game, which has become popular in the past two years, has been called by many people as "a rare offline economy that has exploded during the epidemic" and "a retrograde in the online trend of the game industry."

In May of this year, Xiao Hong (pseudonym), who was in Dalian, Liaoning, wrote the first script of his life under the leadership of a friend. From then on, he "entered the pit" and hit it off with his friends. In August, he rented the venue for decoration. Opened his own script to kill the store.

"I thought it would be fine to rent a venue, buy a few tables, and buy some scripts. But after the opening, I discovered that this is only the basic element. For a script killing store, the most important thing is operation." In the local script circle With zero resources, Xiao Hong and his friends drew customers one by one by handing out flyers, transferring to Moments, and promoting Meituan, and gained a firm foothold.

Xiao Hong, who thought he was "coming to the end", did not expect that this was just the first difficulty he faced.

Hot for two years, I am used to seeing "quick life and death"

The epidemic hit. In 2020, Xiao Hong’s script killed the store’s business hours for less than half a year.

"The normalization of the epidemic has actually had a great impact on indoor entertainment. In order to cope with the epidemic prevention, we have been suspended many times. Other public places, such as catering, can also be eaten, and supermarkets are also open normally, but the indoor entertainment industry can only be Completely closed down.” Xiao Hong has repeatedly emphasized that he is lucky that too many colleagues in this market have lost their money.

Xianyu platform data shows that in April, the number of posts on Xianyu platform that reselled scripts, props, and store tables and chairs on the grounds of "closure" increased by 110% from the previous month.

"On the front line, there may be people earning millions of dollars a year, but more people have lost their money." Xiong Lin (pseudonym) started operating a script-killing store in Qingdao in 2018, and has also witnessed the rapid growth and death of the industry.

"At present, in Qingdao, the average price of script killing is about 68-98 yuan per person, which is not much more than a hundred. However, the monthly operation and maintenance cost is about 20,000 yuan, and many stores cannot support the monthly turnover of several thousand yuan. Go down." Xiong Lin has gotten used to it. Every day I see newcomers become colleagues, and every day old colleagues leave.

The current situation of rapid growth and death has led to the double impression of "wealth code" and "cutting leeks" in the hearts of the public.

At the same time, the excessive expansion of emerging industries in the short term has gradually exposed some irregularities.

Too many "kill" elements?

Horror and supernatural cause worry

Recently, some media have paid attention to the fact that script-killing merchants embed elements of terror, violence, and spirituality in the content and setting of the script, causing concern.

The secret room is mainly the interaction between the player and the environment. Organs, puzzles and NPCs (non-player characters) will be arranged in a relatively large scene, and will also pay more attention to the layout of the scene and the creation of immersion; the script kills It focuses on the game between players, generally only sitting around a table in a room, through the reasoning or fraud between players to promote the game, with the cooperation of DM (host).

"But it is true that there are also some cases of eyeballs with horror and supernatural elements in the industry. This is the consequence of the industry's saturation and lack of regulation, and vicious competition." Xiong Lin said that the current real-world script kill + escape room flagship store is gradually becoming Trend, the industry needs correct guidance.

The picture shows the script killing practitioner is reading the script.

"Terror and spirituality are all stylized forms of expression in the script, and they have always existed, but in recent years, with the attention and exposure of the media, they have gradually been seen by everyone." 10 years ago, I began to contact the "compass reasoning" of script killing ( (Screen name) to Chinanews.com.

"There are still a small number of scripts that kill horror books, and horror books account for about 2 to 30%." Senior script killer Nono (pseudonym) said, but every time you play horror books, the store will inform you that there are horror elements in advance. All content is purely fictitious and so on.

“I’ve played a book before and I’m very impressed. There are some fonts in the script that are different in bold. I don’t know what it means at the beginning, but I wrote it at the beginning of Chapter 4. Re-read all the bold characters. Others Don't read it. After reading it, you will find that the whole story is another story." Nono believes that if the industry wants to develop, the pursuit of horror and excitement will not last long. The core of it depends on the script itself.

Xiao Hong also attaches great importance to the creation of the script: "When the epidemic counterattacked in December last year, we began to rehearse a large number of scripts every day, review the summary, optimize the formatting process, and join in the interpretation. It is these preparations that have allowed us to gain the recognition and reputation of the players. Come down."

"Compass Reasoning" believes that the mainstream in the industry is still excellent and diversified script works, which will promote many different themes such as joy, camp, emotion, home country, etc., and output the correct value orientation, such as home country feelings, attention to the Alzheimer's Symptoms, attention to school violence, etc.

"We also hope that an excellent screenplay will become a classic that can be circulated like novels and movies in the future."

"Compass Reasoning" believes that "a new industry is bound to be constantly revised in the process of barbaric development, and the industry order will become more and more perfect. At this time, the industry needs correct guidance, but it also needs to be given time."

Have you played the script kill?