Minister of Economy Abdullah bin Touq Al Marri and Minister of State for Foreign Trade Dr. Thani bin Ahmed Al Zeyoudi discussed with US Secretary of Commerce Gina Raimondo ways to enhance trade cooperation and develop investment partnerships, within the framework of an expanded visit by the official and trade delegation of the UAE 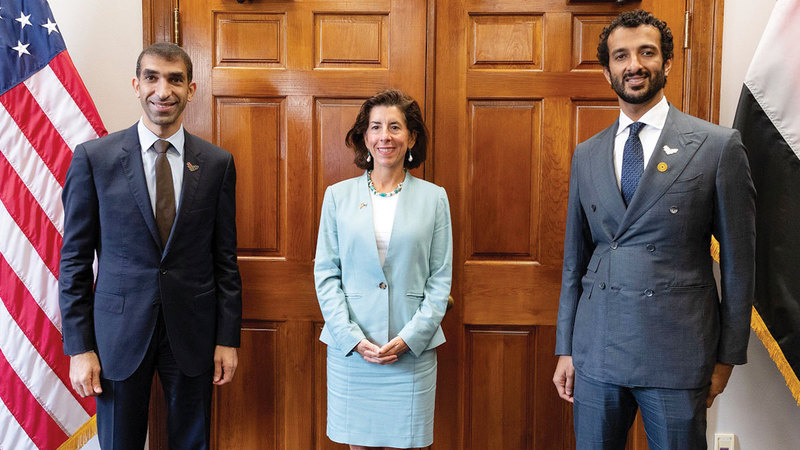 The UAE and US sides discussed the development of investment partnerships.

Minister of Economy Abdullah bin Touq Al Marri and Minister of State for Foreign Trade Dr. Thani bin Ahmed Al Zeyoudi discussed with US Secretary of Commerce Gina Raimondo ways to enhance trade cooperation and develop investment partnerships, within the framework of an expanded visit of the UAE's official and commercial delegation to the United States.

The meeting witnessed the signing of a memorandum of understanding between the UAE and the United States on enhancing cooperation in the digital economy, innovation and entrepreneurship, aimed at developing the strategic partnership between the two countries, to stimulate growth in these areas with competitive capabilities, and in a manner that enhances the position of the UAE, a preferred destination for business and related projects. sectors of the future.

The two parties also discussed developing practical plans to develop trade in goods and services between the two countries during the next stage to new levels, and approved practical steps aimed at intensifying dialogue and coordination in the coming months to increase UAE exports to US markets, as well as facilitating the entry of Emirati aluminum exports to US markets.

The Minister of Economy, Abdullah bin Touq Al Marri, said that the United States is a strategic ally of the UAE, and one of its most important economic and trade partners in the world, stressing that the economic ties of the two countries are solid and witness continuous growth and diversification in their fields and cover most of the 50 US states, focusing on the importance of the "50 projects". Launched by the UAE as an umbrella to generate opportunities for partnership and cooperation between the UAE and the United States at the level of government and the private sector.

For his part, Minister of State for Foreign Trade, Dr. Thani bin Ahmed Al Zeyoudi, stressed the importance of the growth achieved by the two countries over the past years in the fields of trade and investment, pointing out that the UAE is the largest future of US exports in the region for 12 years in a row, and is in the first place. Among the Arab countries investing in the United States.

He pointed to the interest of Emirati companies in investing in technical industries, smart chip manufacturing, semiconductors, information technology projects, fifth-generation communications networks, and others, pointing out that the value of Emirati companies' investments in the United States in research and development activities related to innovation and technology exceeds $1.7 billion.

The non-oil trade exchange between the two countries has achieved significant growth leaps over the past years, rising from $5.22 billion in 2005 to $17.83 billion in 2020.

The UAE ranked first in the region and 19th globally in the list of the largest receiving markets for US exports in 2020, as the value of US exports to the UAE last year amounted to $14.75 billion.

Emirati investments account for the largest share of total Arab investments in American markets, with a cumulative balance of $44.7 billion until the end of 2020, as the country ranks first in the Arab world and 20 globally among the most important countries investing in America.

In addition, the Minister of Economy, Abdullah bin Touq Al-Marri, held a bilateral meeting with the Governor of Maryland, Larry Hogan, and meetings with the business community in the state. The two sides agreed on new plans for joint action and cooperation during the next phase, with the aim of increasing trade exchanges between the UAE and state markets, especially at the level of the private sector. information technology, healthcare, aerospace, and military industries. Bin Touq called on Maryland companies to strengthen their presence in the UAE markets, and to take advantage of the activities of Expo 2020 Dubai, as a global platform for displaying products and services, reaching markets from different countries of the world, and forging new partnerships.

The UAE ranks first in the region and 19th globally in the list of the largest receiving markets for US exports in 2020.