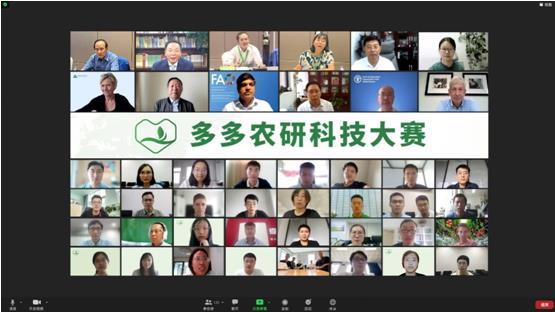 On September 21, the final team list of the second "Duo Duo Agricultural Research and Technology Competition" was announced. A total of 4 teams stood out, namely Hamato, TomaGrow, Horti-AI, and CyberTomato.

It is understood that the "Second Duoduo Agricultural Research and Technology Competition" is co-sponsored by China Agricultural University and Zhejiang University in conjunction with Pinduoduo.

The jury of this competition was led by Zhao Chunjiang, academician of the Chinese Academy of Engineering, and brought together many experts in the field of digital agriculture at home and abroad, such as China Agricultural University, Zhejiang University, Northwest A&F University, Food and Agriculture Organization of the United Nations, and Wageningen University in the Netherlands.

Compared with last year, this year's participating teams are younger. Hundreds of players from all over the world signed up for the competition. In the end, 15 teams with more than 120 young scientists entered the preliminary round.

Among them, most of the participating teams are post-90s, post-95s, and even post-00s. The younger generation of agricultural research workers has begun to emerge.

At the competition, Carlos Watson, the representative of the United Nations Food and Agriculture Organization in China, said that the "Duo Duo Agricultural Research and Technology Competition" provides a practical platform for young scientists around the world.

"Through the application of innovative technologies, a set of practical, cost-reducing and efficiency-increasing technical models and solutions have been explored for farmers to promote the transformation of sustainable agriculture."

In the first agricultural research competition last year, young talents from the global agricultural digitalization field jointly explored how to use technology to increase strawberry production.

This year's competition still pays attention to scientific and technological practice, and advocates the transplantation of scientific research technology from research institutes to fields.

During the two-day online roadshow, 15 teams around the world concentrated on displaying various technical solutions of "technologically growing tomatoes".

Scientists from different fields around the world formed a jury to score the participating teams, and the assessment included multiple dimensions such as team background, feasibility of landing, technical promotion, forward-looking plan, and defense ideas.

“We are very encouraged to see many young talents with different backgrounds show their strength through participating in the Duoduo Agricultural Research and Technology Contest,” said Li Daoliang, a professor at China Agricultural University and a member of the review team. “We hope to build the Duoduo Agricultural Research and Technology Contest into An important platform for everyone in this industry to work together to lead the modernization of agriculture."

Wouter Verhey, Agricultural Counselor of the Dutch Embassy in China, said, “The competition focuses on innovations in smart and sustainable agriculture, which will stimulate innovation in the agricultural sector and promote the development of the industry.”

In this competition, 15 teams around the world competed fiercely. In the end, 4 teams including Hamato, TomaGrow, Horti-AI and CyberTomato entered the finals.

Of the 4 teams in the finals, the post-90s and post-95s members accounted for about 80%. The younger generation of agricultural science and technology workers has become the main force in the competition.

Kiki Hamato finally won the first place in the preliminary round with his overall results.

It is understood that Xi Shi Hamato is mainly composed of scholars from Zhejiang University. It has professional knowledge reserves in many interdisciplinary fields such as new plant sensors, artificial intelligence algorithms, agricultural Internet of Things, crop growth regulation, environmental control technology, and more than 200 articles. Supported by top SCI papers in the industry and 72 national patents.

CyberTomato is a team with diversified backgrounds led by China Agricultural University with the concept of "prospering agriculture with science and technology".

After the preliminary round, the four teams that entered the finals will go to the "Duo Duo Agricultural Research Base" in Yunnan in the near future for a six-month tomato planting final. A comprehensive competition on feasibility.

According to the TomaGrow team, they will set their years of planting experience as the "rule", with high yield and high quality as the "victory condition" and high energy consumption as the "punishment".

Through AI-enhanced learning, find the optimal path that Pomodoro can take in the process of reaching "victory".

At the same time, the team emphasizes "green agriculture" and will accurately manage water and fertilizers during the competition, improve energy efficiency and reduce sewage discharge.

This is also the second batch of agricultural research teams welcomed by the "Duo Duo Agricultural Research Base".

Last year, young scientists around the world used AI technologies such as crop growth models and convolution algorithms to successfully cultivate "technological strawberries" in the agricultural research base.

Compared with the traditional planting method, the technology has increased the strawberry production by 196.32%, and the input and output is 75.51% higher than the average value of the traditional method.

In addition, the two winning teams in the finals began to explore commercial operations and successfully applied scientific research to wider fields.

Pinduoduo has been committed to investing in the field of agricultural science and technology in recent years.

Not long ago, Pinduoduo announced that it would invest 10 billion yuan to formally set up the "10 billion agricultural research" special project, with Chairman and CEO Chen Lei as the number one position.

According to Zhu Jianchong, senior vice president of Pinduoduo, the "10 Billion Agricultural Research" project does not aim at commercial value and profitability. As the goal.

"Currently, there is a big gap in my country’s labor force and agricultural R&D talents." According to Li Daoliang, a professor at China Agricultural University, the front-line labor force engaged in agricultural work in my country is generally between 55 and 60 years old, and farmers born in the 1980s account for The ratio is less than 5%, and the promotion of agricultural digitalization has become an urgent issue.

Zhao Chunjiang, academician of the Chinese Academy of Engineering and leader of the review team, said that at last year’s agricultural research competition, we were delighted to see that many young agricultural scientists took root in the field and carried out a lot of experience from the perspectives of algorithms, production models, and planting practices. Forward-looking innovations and attempts have formed a batch of practical technical solutions.

"We should seize the opportunities of the times, insist on self-improvement of science and technology, focus on the core and key technologies involved in smart agriculture, make great efforts to tackle problems, strive to achieve independent control, improve the market competitiveness of domestic core technology products, and provide strong support for the development of agricultural modernization. "Zhao Chunjiang said.