Maersk Kanoo Emirates, the provider of integrated logistics services for container transport, has signed an agreement with Jebel Ali Free Zone (Jafza) to launch its first-of-its-kind center for warehousing and distribution services in the UAE, on an area of ​​10,000 square meters.A statement issued yesterday said that manager 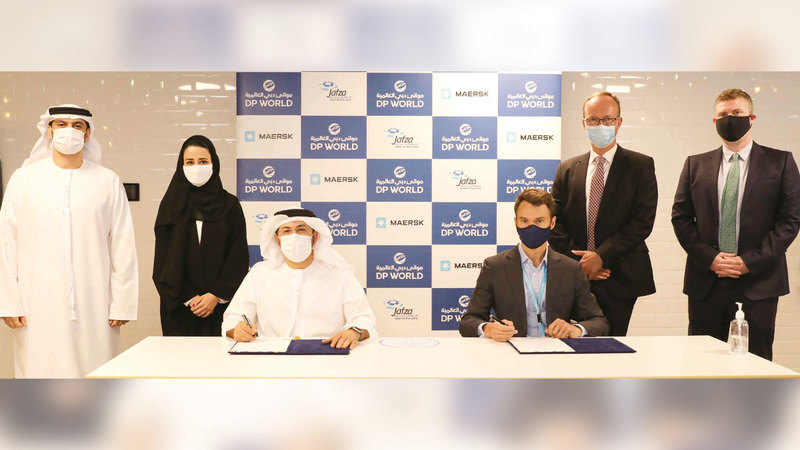 Ben Demithan and Cook during the signing of the agreement for the new center.

Maersk Kanoo Emirates, the provider of integrated logistics services for container transport, has signed an agreement with Jebel Ali Free Zone (Jafza) to launch its first-of-its-kind center for warehousing and distribution services in the UAE, covering an area of ​​10,000 square metres.

A statement issued yesterday stated that the General Manager of Maersk Emirates, Christopher Cook, and the CEO and General Manager of DP World - UAE Region and Jafza, Abdullah bin Demaithan, signed the agreement at the regional headquarters in Dubai of Maersk in West and Central Asia. .

Cook said: “At Maersk, we are committed to connecting and simplifying the relationship between our customers and supply chains, especially at this point in which it is more important than ever to provide flexible access to supply chains, and we are excited as we announce the launch of our first warehousing and distribution centers in the country. UAE".

For his part, Bin Demaithan said: "Through our unmatched infrastructure, in addition to proximity to logistics facilities and business sectors, we will provide the basis on which Maersk will rely to achieve its ambitions for the growth of its business in the UAE."

He added, "In addition to its integration with Jebel Ali Port, (Jafza) will constitute an ideal and multi-modal commercial and logistical center, to reach the company's services to more than 3.5 billion consumers."

The new storage and distribution center for Maersk will be an important addition to its global presence, which includes more than 250 storage centers, with an area of ​​more than 1.5 million square meters, distributed across 50 countries.