Chinanews client, Beijing, September 22 (Reporter Xie Yiguan) "I have a story, do you have any wine?" "Yes, shall we go to a noodle restaurant, dumpling restaurant, or hot pot restaurant?"   In recent years, with the rise of "liquor", catering companies have begun to "do not do business properly" and have sold "liquor" one after another. Data map: A small tavern in Qingdao that has been open f 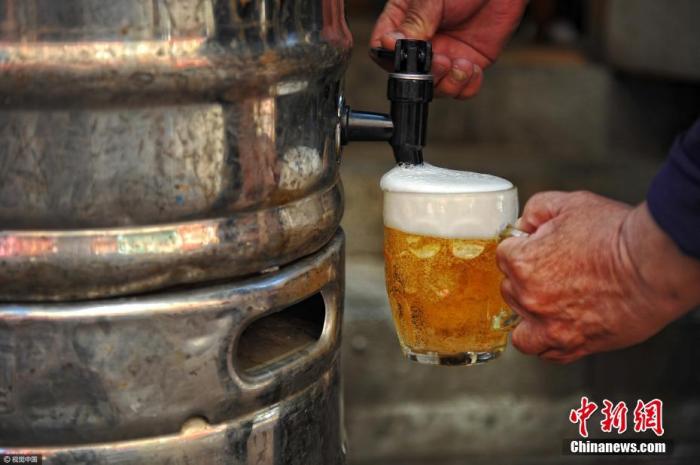 Chinanews client, Beijing, September 22 (Reporter Xie Yiguan) "I have a story, do you have any wine?" "Yes, shall we go to a noodle restaurant, dumpling restaurant, or hot pot restaurant?"

In recent years, with the rise of "liquor", catering companies have begun to "do not do business properly" and have sold "liquor" one after another.

Data map: A small tavern in Qingdao that has been open for 22 years, with a half-meter-wide front door filled with a dozen beer kegs.

"Walk with me on the streets of Chengdu until all the lights are off and don’t stay there. You will pull my sleeves, I will put my hands in my trouser pockets, and walk to the end of Yulin Road, sitting in the tavern. At the door."

Under the "night economy", relying on a bottle of wine for less than 10 yuan, the "pub industry Pinduoduo" Helens, which is popular among young people, has recently taken the lead in listing, becoming the "first share of the tavern" in Hong Kong stocks.

Seeing that the wind in the tavern is getting stronger and stronger, the big-name restaurant companies are also eyeing the wine business, so "everything is available + wine" appeared.

In the same year, BlaBlaBar Naixue Restaurant appeared in Beijing, Shenzhen and other places.

At the end of April 2021, Hefu launched its new sub-brand "Xiaomian Xiaojiu".

The picture comes from the official Weibo of Hefu Xiaomian.

Hot pot companies are also "unwilling to lag behind."

At the beginning of the year, Coucou launched the first new-style hot pot restaurant with a "hot pot + tavern" model in Beijing.

In August, Haidilao launched its first Hi-Lao Bistro in Beijing.

Why do catering companies "love" wine?

"The catering industry has entered a competitive node with high homogeneity, and a differentiated model has become the way to win.'Wine + Catering' is an important means for catering companies to build their own unique DNA." Food industry analyst Zhu Danpeng said.

"As the demographic dividend of the new generation continues to stack up," Zhu Danpeng told a reporter from Chinanews.com, "Recently, the purpose of the establishment of pubs by wine companies is very clear, which is to narrow the distance between young consumers and get closer to the new generation of consumers. "

"The tavern is open late, which is in line with the pace of life of young people and the social needs after get off work. The tavern has become a choice for most young people to chat and relieve stress due to its warm atmosphere and low prices." .

"Starbucks has a variety of store types such as factory stores and selected stores. This has inspired us. The future upgrade of Chinese fast food is multi-scene." Gao Defu, the founder of Xijiade, said when he talked about the bistro model.

The "2020 Catering Night Consumption and Supper Category Development Report" jointly released by Meituan University's School of Catering, etc. shows that from 2017 to 2019, the transaction volume of the catering night market has risen from 31.47% to 35.77%, and the upward trend of catering night consumption is obvious.

This also means that night hours are becoming a new territory for catering brands to seek growth.

It is worth mentioning that substantial profits may also be an important reason for catering companies to enter the drinking and drinking business.

According to the prospectus of Helens, from 2018 to 2020, the gross profit margin of Helens's own alcohol and beverages exceeded 70%.

The picture comes from the official website of Helen Division.

There are risks across borders, "drinking" needs to be cautious

The tavern industry has a huge market potential, but life in the tavern is not as easy as imagined.

Looking through the prospectus of Helen Division, it is found that although revenue continues to grow, net profit will decline in 2020, and the net profit loss in the first quarter of 2021 will increase from 16.569 million yuan in the same period last year to 76.332 million yuan.

"The'fast food + tavern' model currently has a certain degree of uncertainty. With the intensification of tavern competition, some companies that lack competitive advantages in products, services and the environment will face greater pressure." NCBD released "2021 China Bistro Industry Development Research Report" pointed out.

The Frost & Sullivan report pointed out that from 2020 to 2025, the compound annual growth rate of the number of Chinese pubs is expected to reach 10.1%.

"As the demand for offline pubs increases, the market development prospects are improving, which will attract a large number of companies to enter, and competition in the pub industry will also intensify, which may cause a decline in profit levels." Industrial Securities believes that it will also face government supervision, food safety, etc. risk.

Have you been to the tavern and how do you feel?