Demystifying the "species diversity" of Cordyceps: there are insects and "grass", but not insects

China News Service, Kunming, September 21st, title: Demystifying the "species diversity" of Cordyceps: There are insects and "grass", but they are not   China News Service reporter Hu Yuanhang   The Yunbaicao Laboratory of Yunnan University collected nearly 500 species of Cordyceps, nearly 20,000 cordyceps soaked specimens, and more than 8,500 cordyceps strains... it can be called the "Encyclo 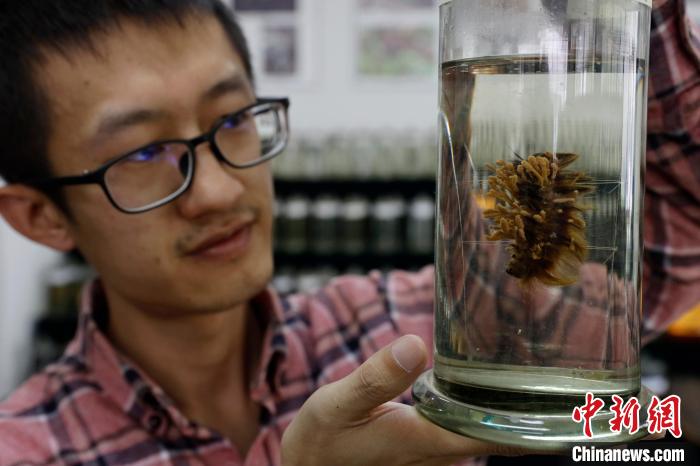 China News Service, Kunming, September 21st, title: Demystifying the "species diversity" of Cordyceps: There are insects and "grass", but they are not

The Yunbaicao Laboratory of Yunnan University collected nearly 500 species of Cordyceps, nearly 20,000 cordyceps soaked specimens, and more than 8,500 cordyceps strains... it can be called the "Encyclopedia of Cordyceps" in the world.

Recently, reporters visited the laboratory to reveal the diverse world of Cordyceps.

"Mushrooms" that grow from insects

Speaking of Cordyceps, most people are probably familiar with Cordyceps sinensis.

In fact, more than 600 species of cordyceps with sexual forms have been discovered worldwide.

The large one is about 30 cm long and the small one is less than 1 cm long.

Are they insects or weeds?

Yu Hong, a professor at the Yunbaicao Laboratory of Yunnan University, told the reporter that although Cordyceps contains insects and weeds, it is not a cordyceps, but a compound formed by the parasitic invertebrates, a few fungi and slime molds of Cordyceps fungi (Hypocea fungi). body.

In layman's terms, it is a "mushroom" that grows from insects.

Before the larva encountered the Cordyceps fungus, it was just an ordinary bug, swimming carefree in the grass or jungle.

But when they encounter the Cordyceps fungus, bad luck begins to come-the spores of the Cordyceps fungus will infect and sneak in from their mouths, limbs, joints, abdomen and other fragile places, and then germinate and grow in the body, and the hyphae will spread wildly until they are completely complete. Swallow the entire worm body.

At this time, the bug has become a "zombie".

When the temperature warms up and the rain increases, the cordyceps mycelium will break through the fetters of the insect body and begin to grow the iconic structure-the fruit body, also known as the sub seat, which is the so-called "grass."

From summer to mid-autumn, various mature cordyceps grow and form.

"From a realistic perspective, in this life-and-death struggle between insects and bacteria, bacteria are the final winners. However, from another perspective, the special life form of Cordyceps is not the mutual achievement of bacteria and insects." Yu Hong It is said that the cordyceps formed by the combination of bacteria and insects can produce a variety of biologically active substances with medical and health benefits, such as nucleosides, polysaccharides, alkaloids, cyclic carboxypeptides and enzymes, etc., exerting "1+1>2" The role of.

From a global perspective, China, India, Nepal and other countries all produce Cordyceps.

However, it is recognized internationally that the origin of Cordyceps is in China.

Yu Hong said that in the Qin and Han Dynasties, the "Shen Nong's Materia Medica" listed the white bass silkworm as a "medium grade", which is the earliest record of Cordyceps used as medicine.

A large number of cordyceps unearthed from the ancient tomb of Haihunhou in Changhai, Nanjiang, also confirmed that Chinese people began to use cordyceps as early as 2,000 years ago during the Western Han Dynasty.

The earliest record of cicada flower and cordyceps originated from the "Lei Gong Pao Burning Theory" during the Southern and Northern Dynasties. It records "Cicada flowers, who want all white flowers, hang them in the southeast corner of the house after they are harvested. The slurry is boiled for one day to night, dried and crushed for fine use."

This shows that Chinese medicine has at least more than 1,500 years of history in the knowledge and application of cicada flowers and cordyceps.

The earliest medicinal records of Cordyceps sinensis can be traced back to 710 AD.

During the time of Tang Zhongzong, the Princess Jincheng married to Tibet and brought a large number of medical personnel and books. Among them, "Yuewang Medicine Clinic" was translated into Tibetan, also known as "Medical Law of the Moon King", which is the earliest surviving Tibetan medical work and is recorded for the first time. Cordyceps is effective in curing lung diseases.

"Tiang Materia Medica" in 780 AD also recorded the function of Cordyceps sinensis to "moisturize the lungs and nourish the kidneys".

This shows that Chinese medicine has a history of more than 1,200 years in the application of Cordyceps sinensis.

In addition, modern research has also confirmed that in addition to its medicinal value, Cordyceps also plays an important role in regulating the number of arthropods in nature, maintaining ecological balance, and biological control of pests.

"The insects are small in the universe, and there are many bodhi in the grass." Yu Hong said that Cordyceps often made him marvel at the wonders of nature, and was shocked by the greatness of life.

The Kingdom of Cordyceps in Yunnan

After more than 20 years of hard work, the Yunbaicao laboratory has collected nearly 500 species of Cordyceps, nearly 20,000 cordyceps soaked specimens, and more than 8,500 cordyceps strains.

Among them, nearly 300 species of Cordyceps were collected from Yunnan.

"Yunnan is located at the southeastern edge of the Qinghai-Tibet Plateau to the intersection of the South Asian Subcontinent and Southeast Asia. It is one of the most complex and diverse regions in the world, and one of the regions with the richest biodiversity in the world. Yunnan has a remarkable three-dimensional climate and is suitable for various Plants, insects and fungi have bred a wealth of Cordyceps species diversity and Cordyceps genetic diversity." Yu Hong said.

"We analyzed the genetic structure and pedigree of Cordyceps sinensis, and identified 8 phylogenetic branches, and came to this conclusion." Yu Hong added.

This has practical and long-term strategic significance for protecting the species diversity and genetic diversity of Cordyceps. It is also important for highlighting China’s characteristics and status in the conservation and sustainable development of Cordyceps biodiversity in the world, and for promoting Chinese medicine and its culture. Realistic and far-reaching significance.