The "Zero Waste" Journey of Mooncakes 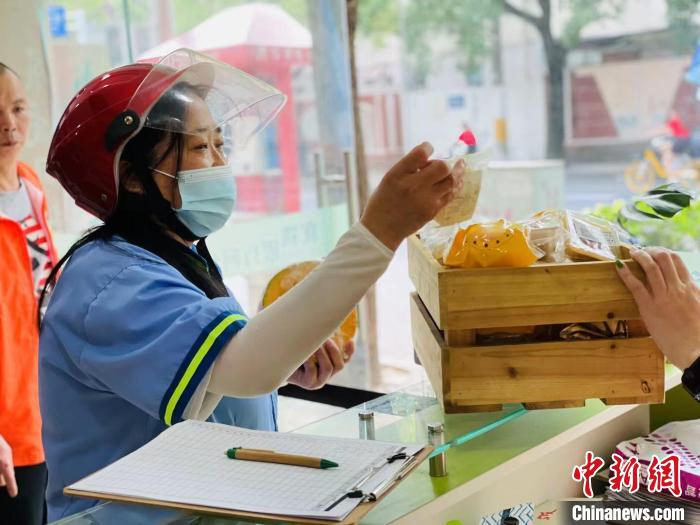 During the Mid-Autumn Festival holiday, in a garden on Huayang Street, Changning District, Shanghai, a "Mooncake Renovation" is underway.

The five-ren moon cakes that were once "ridiculed by the whole network" were reborn under the transformation of two chefs: the five-ren stuffing with dates is made into a portable energy bar; the cut crust is matched with yogurt and fruit , Is the yogurt fruit cup with both appearance and taste.

"Great! With such a transformation, the leftover moon cakes at home have a way out and won't be wasted." The people participating in the event took a "moon cake energy bar" and said while eating.

People went to the distribution point to collect moon cakes.

On the other side of the garden, a dozen boxes of beautifully packed and even luxurious moon cake gift boxes are neatly placed.

These high-end mooncakes with market prices as high as several hundred yuan (RMB, the same below) are all donations from the public for free.

Mooncakes, this traditional food that entrusts family affection and longing, has now become the "area" for major brands during the Mid-Autumn Festival.

At the same time, the social nature of moon cakes also puts a "sweet burden" on some people who "do not catch a cold" with moon cakes.

Event organizers are counting moon cakes donated by the people.

Photo courtesy of the "Road to Tomorrow" Action Team

"The holiday moon cakes sent by friends are not accepted for fear of losing face, and if you accept them, you can't eat them." Seeing that the exquisite gifts are going to be wasted, some people are starting to find a "way out" for the excess moon cakes, trying to turn them to the trash can. "The Journey".

"Donate the excess mooncakes to us!" In the face of this phenomenon, many public welfare organizations and action teams in Shanghai jointly launched the "Zero Waste Mooncake Campaign" to complete the "zero waste" journey of mooncakes: take over from the people Pass excess mooncakes; invite chefs to organize offline workshops to teach people how to turn leftover mooncakes into daily delicacies; the rest of the mooncakes that are packaged intact and within the shelf life will be handed over to the food bank for distribution to those who need mooncakes.

"We received 125 moon cakes within 10 days after the event was launched." One of the organizers of this "moon cake renovation", Mimi (pseudonym), the founder of the "Doo-Go" applet, said that the moon cakes are coming soon. Donations have gradually reached a peak.

Photo courtesy of the "Road to Tomorrow" Action Team

"The moon cakes we received greatly exceeded the amount needed for offline activities, so we had to ask the donors to send them directly to the food bank and enter the distribution process." Another organizer, Feng Feng, the initiator of the "Road to Tomorrow" action group Jing said.

Volunteers are busy unpacking and sorting the donated mooncakes and confirming the shelf life one by one at another "transit station" of the mooncake "journey"-Oasis Food Bank.

“We released the event notice on the 17th and received mooncakes from the public on the 18th. So far, we have received nearly a thousand mooncakes.” On the 20th, the staff of Oasis Food Bank Zeng Wanlun finished hurriedly and continued to be busy.

On the evening of the 19th, after the "Mooncake Renovation" event was over, the remaining mooncakes were sent to the Oasis Food Bank and entered the distribution process; the exquisite packaging boxes were also taken home by the participants and continued to be used.

The picture shows the site of an offline workshop for mooncake transformation.

On the same day, at the distribution point in Tangqiao Street, Pudong New District, Shanghai, about a hundred subsistence allowance households and sanitation workers received free mooncakes from volunteers and showed their smiles.

"We expect to receive moon cake donations in the next few weeks after the festival." According to the Oasis Food Bank, in addition to personal donations from the public, companies, food factories, and catering industries also came to negotiate donations.

"We are also stepping up ties with food banks in Hunan, Anhui, Beijing, Zhejiang, Jiangsu and other places to jointly distribute the remaining moon cakes."

Where should the remaining moon cakes go?

After a journey of "zero waste", it has returned to the essence of food, carrying care and kindness, and reaching the hands of those who need them.