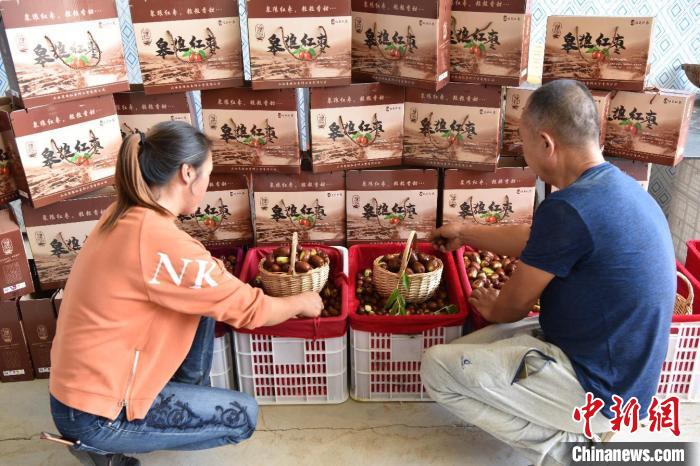 During the Mid-Autumn Festival, in the middle and upper reaches of the Yellow River Grand Canyon in Shanxi and Shaanxi, on the Yellow River beach of Xuejiaduo Village, Kehu Town, Linxian County, Luliang City, Shanxi Province, in the 300-acre jujube picking garden along the Yellow Tourist Road, large and red jujubes are hanging. Full of branches, some date farmers are picking red dates, and some date farmers are sorting and packing.

"As of September 14, more than 1,200 people across the country have ordered our red dates online, the quantity amounted to 3,200 kg." Chen Naiping, the person in charge of the red date picking park, introduced that the "June Xian" brand red dates went on the market early, which not only attracted Tourists from local and surrounding towns, counties and cities have stepped into the picking, and they also attract people from all over the country, including Beijing, Shandong, Liaoning, Shanghai, and Zhejiang, to shop online.

The picture shows the red dates packed in boxes.

Linxian County is a large date producing county, known as the "Hometown of Chinese Red Dates". It has a history of more than 3,000 years of cultivation. The red dates here have large nuclei and thin skin and thick flesh, and are products of National Geographical Indications.

In order to enrich the brand connotation and control the quality of jujube from the source, Shanxi Gaolang Jujube Science Industry and Trade Co., Ltd. circulated 300 acres of yellow river beach jujube land in Xuejiaduo Village, Kehu Town, Linxian County. In 2017, it invested more than 15 million yuan in traditional old Jujube trees are transformed, dwarfed and densely planted, and developed on a large scale.

Public information shows that Linxian cooperates with scientific research institutions and experts to develop new varieties. Fresh dates are on the market from June to October of the lunar calendar every year.

Jujube has also become a "rich fruit" for local people.

The improved jujube trees in the 300-mu red jujube picking garden will begin to bear fruit in 2019 and will be on the market in 2020. After three years, they will reach the fruit-bearing period. The sales price is 40 yuan per kilogram, and the output value is more than 3 million yuan, driving 120 households with 588 people in the village. , The annual per capita income increased by nearly 1,000 yuan.

As the country's Ministry of Commerce's e-commerce entry into rural demonstration counties, local enterprises in Linxian counties have laid out their industries with the concept of "Internet +".

Thanks to this, Yingyou Yaneng in Yongkang City, Zhejiang Province, tasted Linxian red dates. "In the past few years, every Mid-Autumn Festival, I have ordered 100 kg of red dates online in advance as gifts for relatives and friends."

According to the plan, the park hopes to introduce strategic investors to transfer 300 acres of Yellow River beach land in the neighboring village of Cuijiaduo Village, implement the cutting and rejuvenation of old jujube trees, so that the traditional variety of wooden jujube will be revitalized. (over)