Keep cooling down! The price increase in 70 cities has narrowed again, and the property market turning point has appeared?

Sino-Singapore Jingwei Client, September 16th (Dong Wenbo) The latest housing prices in 70 cities have been released. In August, the price of newly-built commercial housing in 46 cities rose month-on-month, compared with 51 cities in July.   On September 15, the National Bureau of Statistics announced the changes in the sales prices of commercial residential buildings in 70 large and medium-siz 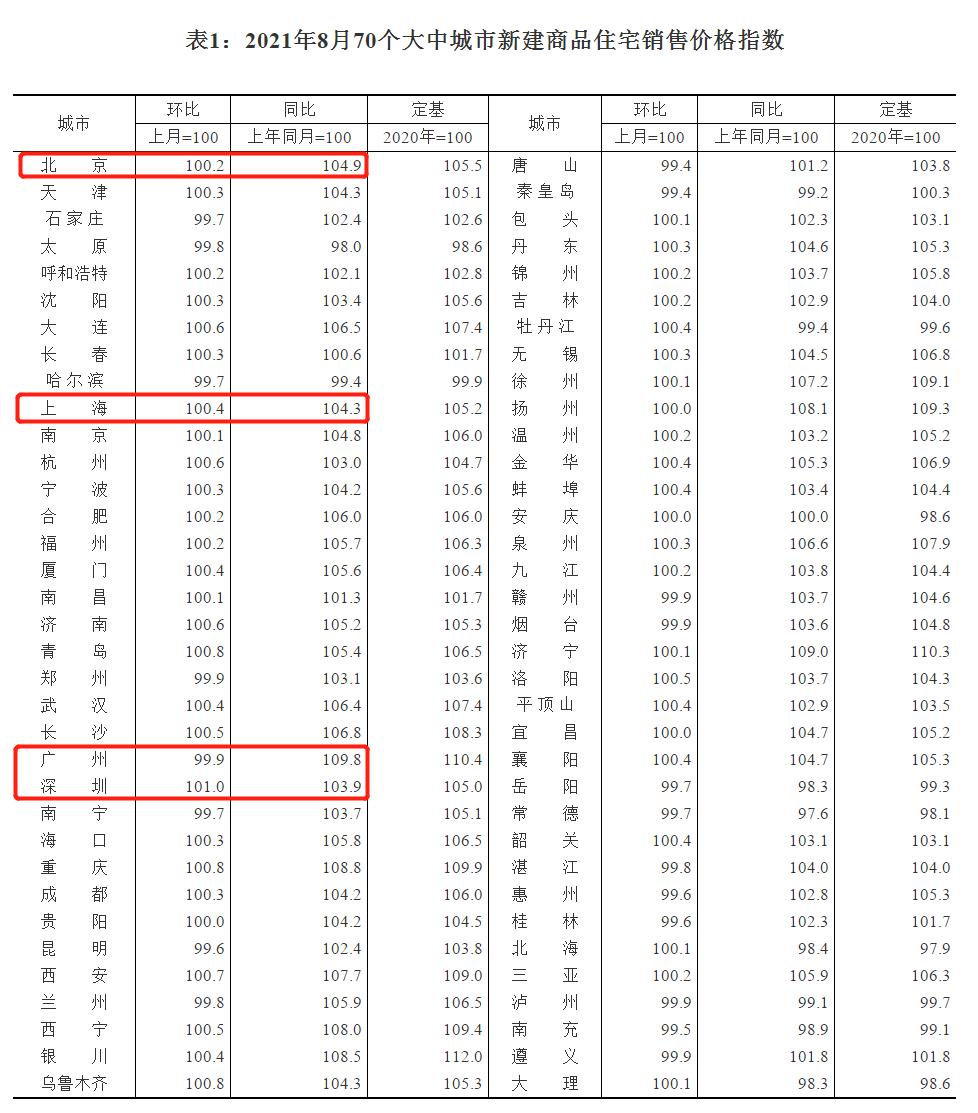 In August, the price of newly-built commercial housing in 46 cities rose month-on-month, compared with 51 cities in July.

Experts believe that with the return of credit policies to normal, housing price growth is expected to slow down in the future, the number of downgraded cities will continue to increase, and a turning point in the property market has appeared.

According to calculations by the National Bureau of Statistics, in August, the sales price of newly built commercial housing in first-tier cities rose by 0.3% month-on-month, and the increase was 0.1 percentage point lower than the previous month; it was up 5.7% year-on-year, and the increase was 0.3 percentage points lower than the previous month.

In terms of city levels, the first-tier cities, Beijing and Shanghai, rose 0.2% and 0.4% month-on-month respectively; Guangzhou turned from a 0.2% increase in July to a decline of 0.1%; Shenzhen led the 70 cities with a 1.0% month-on-month increase.

In addition, the sales price of newly-built commercial residential buildings in second-tier cities rose 0.2% month-on-month, a decrease of 0.2 percentage points from the previous month; the sales prices of newly-built commercial residential buildings in third-tier cities rose 0.2% from the previous month to the same level.

Yan Yuejin, research director of the Think Tank Center of E-House Research Institute, believes that the third quarter is a period in which the national real estate market has cooled significantly. In particular, the continuous tightening of credit policies in various regions and the decline in market transaction volume have caused a significant cooling in price indicators.

New policies on property market regulation in many places

Since entering the second half of the year, the central government has repeatedly reiterated that "housing is not speculation", and the property market has ushered in a new wave of regulation.

On July 22, the Ministry of Housing and Urban-Rural Development stated that it will further implement the main responsibilities of the city government, strengthen the supervision and guidance responsibilities of the provincial government, and resolutely hold the accountability of the cities where the regulation is not effective and the housing prices are rising too fast.

Since then, as of the end of August, more than 30 places have issued new policies on property market regulation, including the four first-tier cities of Shanghai, Beijing, Guangzhou, and Shenzhen, as well as hot cities such as Wuhan, Hangzhou, Chengdu, and Xi'an.

It is worth mentioning that on July 29, just six days after the Ministry of Housing and Urban-Rural Development expressed its accountability, the leaders of the five cities of Yinchuan, Xuzhou, Jinhua, Quanzhou, and Huizhou were interviewed.

The Ministry of Housing and Urban-Rural Development requires that the house is to be used for living, not for speculation, not to use real estate as a means of stimulating the economy in the short term, and to increase regulation and supervision in response to new conditions and new problems in the real estate market in the first half of the year.

At the same time, the Ministry of Housing and Urban-Rural Development announced that the above five cities will be included in the list of key cities for real estate market monitoring.

As for the extent of housing price increases in these 5 cities, you can get a glimpse of the past monthly data.

After that, on the evening of August 23, the 12 departments of Yinchuan jointly issued a notice, clearly requiring the stabilization of housing prices, strictly implementing the "one house, one price" filing system; strictly controlling the land premium rate, and resolutely stabilizing land prices; tightening restrictions on the purchase and sale of commercial housing ; The down payment ratio for the second set is increased from no less than 40% to no less than 50%.

As a whole, the nationwide real estate fever has been declining due to credit tightening.

Zhang Dawei, chief analyst of Centaline Property, pointed out that overall, after September 2021, with the return of credit policies to normal, housing price growth is expected to slow down in the future, and the number of downwardly adjusted cities will continue to increase.

It is expected that with the advent of the traditional peak season of Golden, Nine, and Silver, real estate companies will increase their promotional efforts, and the phenomenon of price-for-volume exchange will increase, and the increase in new house prices may continue to fall.

Zhang Dawei said, "Preventing the property market from falling too fast is likely to become a future policy trend."

Zhang Dawei pointed out that in the past two years, the property market has become more and more stringent. On the one hand, there is a "price limit order" for new and second-hand houses in hot cities. Obviously, a sharp rise in house prices will amplify financial risks, and a cliff-like decline in house prices is also not stable. Will affect the financial system.

The recent "restriction orders" for new houses in many cities across the country appear to be that some real estate companies are rushing to run away under high debt pressure. In fact, it further illustrates that "stability" is the most certain keyword in the property market.

Yan Yuejin said, “In the near future, we should focus on the performance of some cities under the'restriction order'. Changde, Taiyuan, Dali, Yueyang, and Beihai are among the cities where the price of new homes in August has fallen significantly year-on-year. Among them, Yueyang has already introduced the'restriction on decline. In the future, for such cities with a large decline in housing prices, we need to pay attention to the pressure of inventory depletion, while ensuring the stability of sales order." (Zhongxin Jingwei APP)