The Dubai Arabian Horse Stud has announced the holding of an auction for its local production, during the first days of the launch of the Expo 2020 Dubai exhibition next month. you 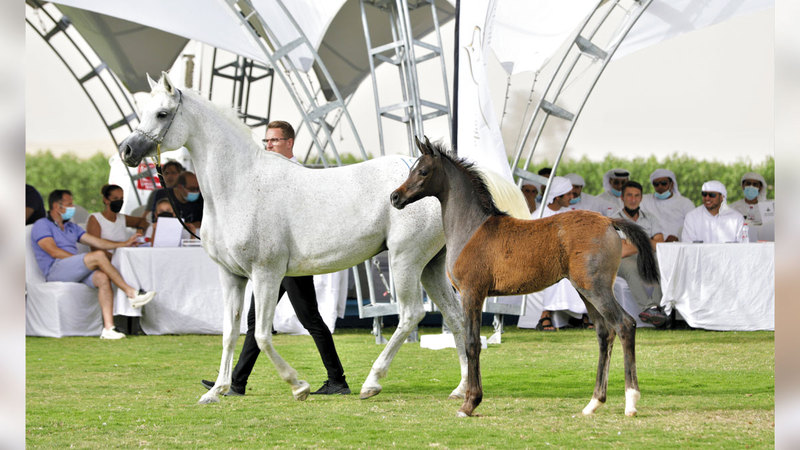 A global date to display the most beautiful purebred Arabian horses

The Dubai Arabian Horse Stud has announced the holding of an auction for its local production, during the first days of the launch of the Expo 2020 Dubai exhibition next month.

The auction will be held in the grass field of the "Dubai Stud" on Saturday, the ninth of next October, to be a new global date for a new display of the stud's production of the most beautiful purebred Arabian horses, famous for their quality and record achievements, which made him the best in the world, and the most popular in recent years of International studs, thanks to the great progress of its production in developing the blood of its horses, and achieving golden results in international championships.

The auction program includes previewing the displayed horses from nine in the morning until one in the afternoon, then the bidding starts at two o'clock.

The Dubai Stud intends to display a group of the finest horses of its new production, along with a number of horses with immaculate records in international championships, in order to give the “Expo 2020” occasion the global privacy it deserves, translating the position of the quality brand for Dubai and the UAE, as a global market for excellence and quality. And enabling Arab horse lovers from the world's studs to benefit from this occasion as a feasible, feasible and historical opportunity.

The Dubai Stud is considered the strongest globally in recent years, quantitatively and qualitatively, with the recognition of the Arab horse community in the world, whether it comes to the assessment issued by experts and trackers in this field, or to the record results that local and international championships have preserved throughout its history.

And still echoes of the record success achieved by the stud in its last auction, which was held inside the walls of the stud on the 13th of last March, a success that closed the curtain on the successes of previous auctions by achieving a new record, while the price of the most expensive horses sold at auction reached 800,000 dirhams with the skilled «Di» Shafa”, one of the icons of contemporary global production, the stallion “FAL Rachim” and the mare “De Schrod”, which explains the level of competition, and the participants’ keenness to include the production of the Dubai stud in their stalls, and to pump the blood of high-quality horses into their breeding and production programs.

As the “Dubai Stud” registered a generous initiative for the benefit of the participants in the last auction, by allocating a group of Shabwa, the global contemporary production stallion “FAL Rasheem” and the international stallion “Di Siraj”, through the process of drawing lots for three groups, including Shabwa, Shabtoin and three Shabwa, divided according to The purchase value. The stud is expected to renew during the “Expo Auction” the same initiative, a method that the stud used to do in all its auctions, to encourage participants, or to allocate part of its proceeds to humanitarian needs.

It is worth noting that the "Dubai Stud" has launched the season of analogy from the contemporary global production stallion "FAL Rasheem" ​​and the international stallion with a golden duo "Di Siraj" and the distinguished stallion "De Nael", which is an opportunity that those interested consider an opportunity to take advantage of these production pyramids in Developing Arabian horses at national and international studs.

The General Supervisor and Director General of the Dubai Arabian Horse Stud, Engineer Mohammed Al-Tawhidi, confirmed that the “Expo 2020 Arabian Horse Auction” is being held exceptionally for the second time this year, after the annual auction that was held in March, in response to the paramount importance of the global event “Expo 2020”. Which will start next October.

He said that the "Expo 2020 auction" is a major global event and a historic opportunity, and the "Dubai Stud" is very interested in contributing to the corner of its competence, and we know that all those concerned with developing their fields of activities will be on time, and those interested in purebred Arabian horses have the right to develop their production and benefit from the global quality capabilities that The cleat allows.

For his part, the CEO of Dubai Stud,

Abdulaziz Al-Marzouqi, that the “Expo 2020 auction” is an event that derives its strength from two important factors: the first is the importance of the historical global event Expo 2020, and the second is the great importance of the auction itself, given the increasing demand for local production of the Dubai Stud, especially after the record success witnessed by the annual auction in Last March, as well as the global results achieved by our production, and enjoyed by dozens of anchors from the East and West in the international podiums in the past seasons and during the current year, with which its achievements continue with unquestionable superiority, whose industry is topped by the icon of contemporary global production, the stallion “FAL Rasheem” and his son The international stallion "Di Siraj".