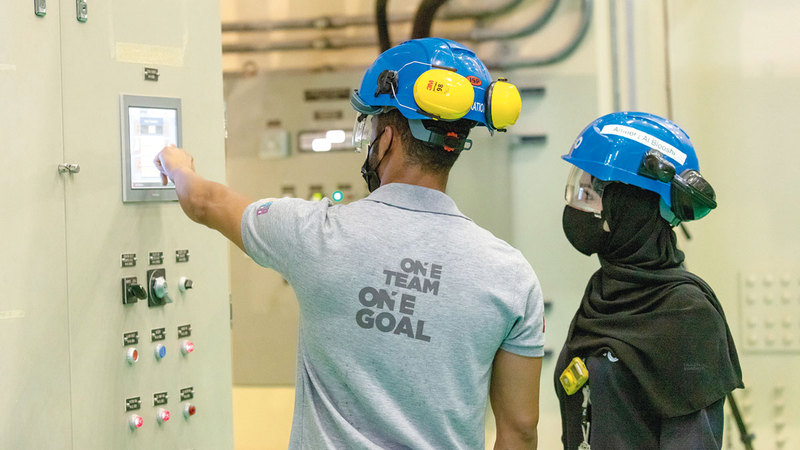 The Emirates Nuclear Energy Corporation announced that its operational arm, Nawah Energy Company, has completed the safe connection of the second plant of the “Barakah” peaceful nuclear energy plant to the main electricity network in the UAE, after the start of operation of the second plant in late August 2021, thus producing the first megawatt. of carbon-free electricity from the second of the four "Barakah" plants.

After the start of operation of the second plant reactor on August 27, 2021, the Barakah plants became the first multi-station nuclear energy project to enter the operation phase in the Arab world, which reflects the advanced level of Emirati expertise in applying local regulations and international standards, as well as the international skills and expertise of the work teams it leads. Emirati competencies, who have achieved this important achievement.

“Barakah” stations continue to provide a model for new projects related to environmentally friendly energy around the world, as the knowledge and experiences developed by the operating team at the first station in “Barakah” were benefited by linking the second station to the network more effectively, by reducing the time between the start of the operation. Operation and network connectivity by 10%, while continuing to adhere to the highest standards of nuclear safety and operational excellence.

With the completion of the process of connecting a second Barakah power plant to the electricity grid, work continues on the plant towards adding 1,400 megawatts of environmentally friendly energy to the country's electricity grid.

This achievement contributes to achieving the goals of the Emirates Nuclear Energy Corporation and its subsidiaries, to provide up to a quarter of the country's needs of environmentally friendly electricity around the clock, while contributing to the reduction of carbon emissions, which is the main cause of climate change.

The process of connecting the second station with the grid is an important step in the stage of preparing for the commercial operation of the station, during which the generator of the second station was aligned with the requirements of the main electricity transmission network in the country.

After completing the process of connecting with the network, the operating team of the second plant in "Barakah" will begin the process of gradually raising the energy levels of the reactor, which is known as

With the “step-up energy test”, the plant’s systems are committed to operating according to international best practices, to ensure safe progress towards full electricity production. When this process is completed, the second plant will produce about 1,400 megawatts of base-load electricity.

All tests will take place under the continuous supervision of the Federal Authority for Nuclear Regulation, the independent body responsible for regulating nuclear activities in the UAE, which has so far conducted more than 335 inspections, since the development of the Barakah plants began, as well as more than 42 audit missions by the Agency. International Atomic Energy and World Association of Nuclear Operators.

The specialized work teams at Nawaat worked closely with the Abu Dhabi Transmission and Control Company (TRANSCO), a subsidiary of the Abu Dhabi National Energy Company (TAQA), which built overhead lines to connect the Barakah Nuclear Energy Plants to the Abu Dhabi network, ensuring that the energy produced by the plants reaches Barakah is safe for consumers all over the country.

By providing millions of homes and businesses in the business sectors with abundant and environmentally friendly electric power from the Barakah plants, the Emirates Nuclear Energy Corporation is leading the largest efforts in the region to reduce carbon emissions, especially since the plants have now become the largest single source of carbon-free electricity in the country. Emirates and the Arab world.

The Barakah plants, located in the Al Dhafra region in the Emirate of Abu Dhabi, are one of the largest nuclear power plants in the world, and it includes four identical plants that include the advanced reactor design of the APR-1400 model. and steady since then.

The first station produces thousands of megawatts of environmentally friendly electricity around the clock, while the construction works in the third and fourth stations have reached their final stages with completion rates of 95% and 91%, respectively, with the application of experiences and lessons learned from the first and second stations.

The overall completion rate in the four stations reached more than 96%.

Once fully operational, the four plants will produce up to 5,600 megawatts of carbon-neutral electricity for more than 60 years.

Barakah plants are the largest contributor to reducing carbon emissions in the region and the Arab world.

Producing the first megawatt of carbon-free electricity from the second of the four Barakah plants.