The agency predicts that the CPI will increase by 1% year-on-year in August: the price of pigs will remain stable, and the prices of vegetables and eggs will "fly"

China-Singapore Jingwei Client, September 9th (Xiong Siyi) On the morning of the 9th, the national statistics will announce the consumer price index for August 2021. Many institutions predict that the CPI will increase by 1.0% year-on-year in August, which is the same as July 2021.   For the upcoming August CPI data, as of September 8, 14 institutions predicted an average of 1.0%. The maximum v 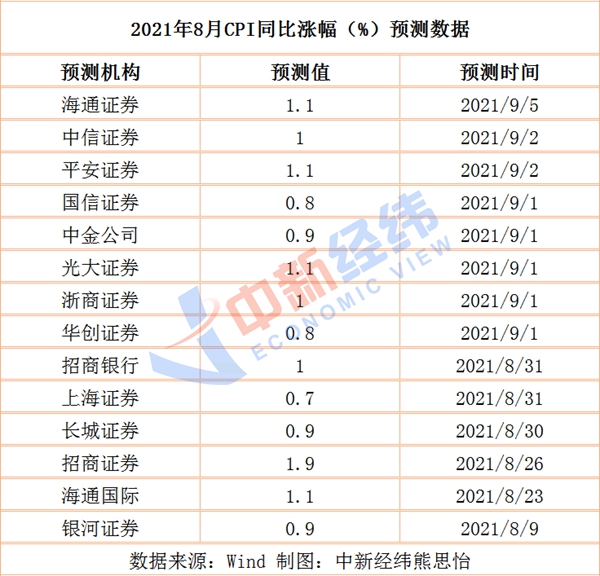 China-Singapore Jingwei Client, September 9th (Xiong Siyi) On the morning of the 9th, the national statistics will announce the consumer price index for August 2021.

Many institutions predict that the CPI will increase by 1.0% year-on-year in August, which is the same as July 2021.

For the upcoming August CPI data, as of September 8, 14 institutions predicted an average of 1.0%.

Institutions generally believe that pig prices continue to fluctuate at a low level, and the slight increase in vegetable prices has driven the recovery of CPI food items.

In terms of non-food products, the price of refined oil has been lowered, and demand for travel and other things has fallen after the outbreak of the local epidemic. It is expected that the pressure of rising prices of industrial consumer goods and services will ease in August.

Increase in prices of vegetables and eggs

CICC Macro pointed out that the production capacity of live pigs has achieved the recovery target six months ahead of schedule. Due to emergencies such as severe weather and the epidemic, live pig production has accelerated, and the epidemic has suppressed the demand for dining out and collective consumption, and the price of live pigs continued to fall in August.

Zhong Zhengsheng, chief economist of Ping An Securities, pointed out that the monthly average of the agricultural product wholesale price index rose 3.7% month-on-month in August after falling for five consecutive months.

Li Chao, chief economist of Zheshang Securities, pointed out that affected by the high temperature and humidity, vegetables have entered the "absence period", and the superimposed flood conditions in Henan have led to limited vegetable supply, and vegetable prices have risen slightly, slightly stronger than seasonal factors, driving the CPI. Food items picked up.

The National Economic Research Center of Peking University believes that due to the increase in logistics and transportation costs caused by heavy rainfall, the average wholesale price of vegetables and eggs across the country has rebounded significantly from the previous month.

In terms of non-food, Gao Ruidong, chief macro economist at Everbright Securities, believes that due to the spread of the domestic epidemic, the demand for travel-related service industries has weakened. In August, the service industry PMI dropped sharply to 45.2% from 52.5% in the previous month. Among them, the prosperity of transportation, accommodation, catering, entertainment and other industries has weakened. It is expected that service prices will be under pressure in August; domestic oil prices will fall slightly in August, and domestic gasoline and diesel prices will turn negative month-on-month, respectively -1.6% and -1.8% , The impact of rising raw material prices on CPI is expected to weaken.

Li Chao and others pointed out that the epidemic continues to delay the restoration of core CPI.

In terms of tourism, in early August, the Ministry of Culture and Tourism requested the suspension of inter-provincial team travel and "air ticket + hotel" business for travel agencies in high-risk areas.

The opening of scenic spots is also limited by the epidemic. In early August, more than 1,000 A-level tourist attractions across the country were temporarily closed.

In terms of transportation, inter-city bus, taxi, and ride-hailing services in cities in high-risk areas were suspended.

CICC Macro believes that non-food consumer goods may remain the same as in the previous month, and rents continue to rise. Although the prices of tourism and other services have a low base, the epidemic restricts the month-on-month increase and may only increase slightly year-on-year.

Huaxi Securities wrote a few days ago that the core of the judgment of the future trend of CPI is to judge the price trend of its main driving factors.

CPI food, tobacco and alcohol sub-items are mainly driven by the prices of pork and fresh vegetables.

In terms of pork, West China Securities pointed out that the growth of live pig supply has slowed down, and the marginal improvement of pork demand, pork is expected to stabilize and rebound.

In addition, Huaxi Securities pointed out that the chain price of fresh vegetables has obvious seasonal characteristics.

Generally speaking, from July to September in the second half of the year, the whole country will enter a period of frequent floods and waterlogging disasters, focusing on the impact on vegetable production.

From November to December and from January to February of the following year, as the weather gradually turns cold and holidays such as New Year's Day and Spring Festival are approaching, the price of fresh vegetables will be further supported.

Based on the analysis and judgment of multiple factors, West China Securities predicts that the overall CPI will rise in the second half of the year, and it will reach a high point (2.2%) in November. The overall situation is relatively mild and the pressure is not great.