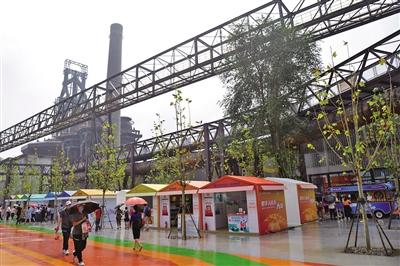 The 2021 Digital Trade Development Forum was held today at the National Convention Center, and the list of "Key Enterprises in Service Trade in 2021" will be released

Since the opening of the Service Trade Fair in 2021, Beijing's Shijingshan District, Haidian District, Fengtai District, Shunyi District, Huairou District and other districts have used exhibitions, forums, public open days and other activities to promote their location advantages and issue a number of service trade policies.

Take advantage of the Winter Olympics 24 projects signed and landed

On September 4, the Shijingshan Theme Summit Forum "Winter Olympic Opportunities Drive Urban Rejuvenation" was held on the 9.7m meeting platform of the No. 3 Blast Furnace of the Shougang Park of the Service Trade Fair. The signing ceremony of key projects was held at the forum. CCCC Capital Holdings Co., Ltd., Lunar Exploration Signed contracts with 24 modern financial and technological services projects, including the Aerospace Engineering Center, to land in Shijingshan District, involving an investment of approximately 39.2 billion yuan.

During the current service trade fair, Shijingshan District is expected to sign contracts with nearly 100 companies, involving more than 60 billion yuan of funds.

Li Xin, the mayor of Shijingshan District, introduced that as the Winter Olympics enters "Beijing Time", various preparatory tasks have entered a critical period of full sprint and decisive victory. The main line, Shijingshan District will focus on four aspects: improving the city's service guarantee capacity, building a new landmark for the rejuvenation of the capital city in the new era, promoting the transformation and upgrading of the service industry, and expanding cultural exchanges and integration.

In response to the transformation and upgrading of the service industry, Li Xin said that Shijingshan District will take advantage of the Winter Olympics to cultivate and expand the ice and snow industry, explore the theme of ice and snow activities, and create an ice and snow sports service circle that integrates public fitness, competitive training, competition performance, entertainment and leisure. New highlights of the Winter Olympics economy; actively promote the integration of "sports+" with the cultural and tourism industries, give full play to the advantages of Xishan Yongding River cultural belt, eight places, and model ports to expand the scale of the industry; strengthen the leading position of the modern financial industry to promote Innovative development of asset management, insurance technology, consumer finance, and construction of a national-level financial industry demonstration zone.

"Guidelines for Foreign Investment in Haidian District" to be released today

Many companies released their results at the Service Trade Fair.

Up to now, 28 projects have reached cooperation intentions, of which 9 are investment projects and 19 are transaction projects, with an intention to sign over US$1.5 billion.

In addition, more than 310 Haidian companies have set up "cloud booths" on the official website of the Service Trade Fair.

Wang Peng introduced that the three events hosted by Haidian of the Service Trade Fair this year all focused on digital innovation and aimed to promote the high-quality development of Haidian District.

On September 3, the 2021 "Haidian Night" promotion and exchange meeting was held, and the signing ceremony of the key construction projects of the "two districts" was held, and 29 projects were signed on-site.

The site also meticulously designed the "Haidian Pact"-the first anniversary of the construction of the "two districts" exhibition.

The 2021 Digital Trade Development Forum will be held today at the National Convention Center. As one of the sub-forums of the 2021 Trade in Services Conference, heads of relevant institutions such as India, Japan, the Philippines, Germany, and Poland will discuss the development of digital trade in the BRICS and other countries. Give an introduction and have a live dialogue with digital trading companies.

Wang Peng introduced that the "Guidelines for Foreign Investment in Haidian District" will be released today in both Chinese and English, both online and offline.

"We hope that the "Guidelines" can become a'tool book' for foreign investors and related companies to invest in Haidian, and truly realize the'guidance in hand, investment in Haidian without worry'."

Visitors can experience convenient payment on the "Digital RMB Avenue"

On September 5, the Service Trade Fair ushered in its first public open day.

During the exhibition, Fengtai District, the Institute of Mathematics and related institutions also participated in "Digital Finance Carnival" and "Digital Currency Shopping Festival" and other conference theme activities, focusing on the development advantages of Lize, the development environment of digital finance and the achievements of digital RMB (application), etc. .

At the same time, pioneering application scenarios in many fields have been rolled out one after another.

Shunyi District is the seat of the Capital Airport Airport Economic Demonstration Zone, and is the only airport in my country that has an annual passenger throughput of more than 100 million passengers.

The "Aerial Silk Road" Innovation Demonstration Zone will develop in multiple directions, including the joint efforts to create a gathering area for international aviation resource allocation and the provision of "one-stop" solutions for international investment services in the aviation industry.

In addition, "Several Measures to Promote the Development of Air Cargo Development in Shunyi District" was also officially released at the summit.

The "Several Measures" proposes to encourage the establishment of a new base air cargo company in Shunyi District, and to launch and operate 3 all-cargo aircrafts, a one-time reward of 1 million yuan will be given. Starting from the 4th aircraft, the standard will be 400,000 yuan per aircraft. , Give superimposed rewards at once.

The "Several Measures" also encourages enterprises to implement technological innovation measures such as energy saving, emission reduction, carbon neutrality, etc. Among them, the first year of electricity consumption will be given to companies that simultaneously design and install photovoltaic power generation systems for new storage facilities or implement photovoltaic power generation transformation on the roofs of existing storage facilities. The subsidy is 0.4 yuan per kilowatt-hour.

On September 4, at the special press conference of the 2021 Service Trade Fair in Huairou District, Wen Laisheng, deputy director of the Huairou District Cultural Tourism Bureau and deputy director of the Cultural Promotion Center, introduced that the first phase of the new campus of Beijing Film Academy has entered the completion and acceptance, the first batch of 9 The 1,400 teachers and students of the department are expected to settle in mid-September this year; the second phase of the project is stepping up the preliminary procedures, and it is planned to be completed and put into use in 2025.

After the completion of the project, there will be more than 4,000 high-end film and television talents working and living in Yangsong Town for a long time.

According to Wen Laisheng, Huairou is a Chinese film capital where culture and technology are integrated and developed, and has a good industrial foundation.

A number of key projects such as Beijing Film Academy, China Film Base, Alibaba Entertainment, and Bona Pictures have been accelerated. The "Film and Television Culture+" industrial chain has been improved and upgraded, and the development of China's film capital is strong.