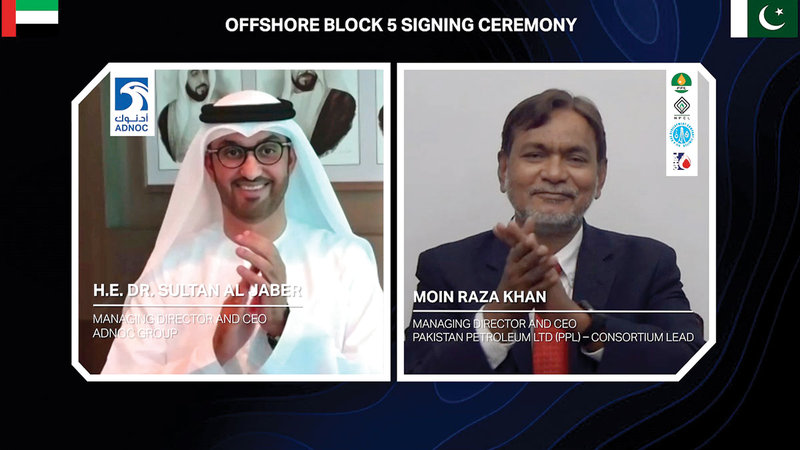 The consortium led by BBL obtained oil and gas exploration rights in Abu Dhabi's "Offshore Block 5", as part of the second round of competitive bidding launched by Abu Dhabi as part of its strategy to issue licenses for new areas.

This agreement represents the first time that Pakistani companies have invested in oil and gas exploration concessions in the Emirate of Abu Dhabi, and is the first partnership between ADNOC and Pakistani energy companies.

This historic agreement benefits from the close cooperation relations between the UAE and Pakistan, and also confirms ADNOC's approach to expanding the scope of strategic partnerships and joint investments, with partners capable of facilitating the access of its crude oil and petroleum derivatives products to key growth markets.

Under the terms of the agreement, the consortium will obtain a 100% stake in the exploration phase, and will invest up to 1.12 billion dirhams ($304.7 million), including participation fees in exploration, drilling exploration and evaluation wells to explore and evaluate oil and gas opportunities in “Offshore Block 5” » Which covers an area of ​​6,223 square kilometers and is located 100 km northeast of Abu Dhabi.

The Minister of Industry and Advanced Technology, Managing Director and CEO of ADNOC and its group of companies, Dr. Sultan Ahmed Al Jaber, who signed the agreement, said: “In line with the leadership’s directives to achieve the maximum possible value from Abu Dhabi’s oil and gas resources, this historic agreement was signed under which we awarding an oil and gas exploration concession to a consortium that includes a number of Pakistani companies.

He added: "This agreement represents a new stage of cooperation in the energy sector between the UAE and Pakistan, which enjoy close relations spanning fifty years in various sectors. This agreement provides more important opportunities that can achieve mutual benefits such as supporting energy security, and contributing to strengthening partnership relations." strategy and economics between the two countries.

He continued: "The selection of the consortium, which includes a number of Pakistani companies operating in the energy field, as part of the second round of competitive bidding launched by Abu Dhabi to issue licenses for new areas, confirms (ADNOC) approach to expanding the scope of strategic partnerships and joint investments with partners who enjoy important advantages such as access to markets. capital, the best expertise and advanced technology.”

Al Jaber expressed his optimism and confidence in the ability to maximize the value of these resources through cooperation with partners in the second round of competitive bidding, as part of the continuous endeavor to accelerate the exploration and development of Abu Dhabi's untapped hydrocarbon resources in line with the leadership's directives.

On his part, Moin Raza Khan, Managing Director and CEO of PPC, said: “As a consortium led by PPC, we are pleased to have been selected for the awarding of the concession (Offshore Block 5) in Abu Dhabi, and there is no doubt that this agreement represents an important step in The process of bilateral cooperation between Pakistan and the Emirate of Abu Dhabi in the field of energy, strengthening economic ties, and providing an opportunity to enhance strategic cooperation with (ADNOC) to exchange knowledge and technical expertise between the two sides.”

He added, "We are particularly excited that this alliance includes four major national companies in exploration and production, which are ready to contribute to strengthening (ADNOC) and Abu Dhabi's leading position in the global energy sector."

The right to develop and produce

ADNOC has the option to retain a 60% stake in the concession production phase, which extends for 35 years from the start of the exploration phase, at a time when the award of “Offshore Zone 5” will provide more promising opportunities in enhancing the local added value in the country during the concession period.

In addition to drilling, exploration and evaluation of exploratory and appraisal wells, the exploration phase will witness the consortium’s financial and technical contribution to the huge geophysical survey project implemented by ADNOC, which provides accurate three-dimensional data on the concession area.

Survey data that has already been conducted over a large area of ​​this region, which is located near existing oil and gas fields, indicates that it has promising potential.

• The Pakistani alliance invests 1.12 billion dirhams during the exploration phase.

• «We are fully prepared to contribute to strengthening the position of (ADNOC) and the Emirate of Abu Dhabi as a leader in the global energy sector».

• "Accelerating the pace of exploration and development of Abu Dhabi's untapped hydrocarbon resources in line with the directives of the leadership."

ADNOC launched the second round of Abu Dhabi's competitive bidding in 2019, offering on behalf of the Abu Dhabi government a group of key land and sea areas.

With the award of "Marine Zone 5" to the Pakistani consortium, the second round of Abu Dhabi's competitive bidding, which saw highly competitive bids for the geographical areas offered, concludes.

In the wake of ADNOC's discoveries of 22 billion barrels of onshore recoverable unconventional oil resources, and 160 trillion standard cubic feet of unconventional gas resources, it was decided not to award an exploration license to "Onshore Area No. 2".

The region contains resources comparable to the production of shale oil in North America.