CPI continues to fall year-on-year, and the rise in fresh vegetable prices affects the trend of CPI?

Chinanews client, Beijing, August 9th (Reporter Xie Yiguan) Driven by the expansion of pork prices, the CPI continued to fall in July year-on-year. Under the influence of extreme weather, the price of fresh vegetables has turned from a decline to an increase. Will it affect the trend of CPI in the future? ? CPI ups and downs chart. From the National Bureau of Statistics "Second Brothers" fell 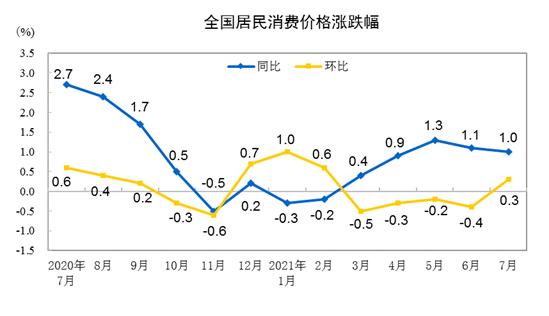 Chinanews client, Beijing, August 9th (Reporter Xie Yiguan) Driven by the expansion of pork prices, the CPI continued to fall in July year-on-year. Under the influence of extreme weather, the price of fresh vegetables has turned from a decline to an increase. Will it affect the trend of CPI in the future? ?

According to data released by the National Bureau of Statistics on August 9th, in July, the national consumer price (CPI) rose by 1.0% year-on-year, a decrease of 0.1% from the previous month.

From a month-on-month perspective, the CPI went from a 0.4% decline last month to an increase of 0.3%.

Dong Lijuan introduced that in food, due to extreme weather such as typhoons and heavy rainfall in some areas, the cost of production, storage and transportation of fresh vegetables has increased, and the price has changed from a drop of 2.3% last month to an increase of 1.3%.

According to the monitoring of the Ministry of Commerce, from July 26 to August 1, the average wholesale price of 30 kinds of vegetables was 4.28 yuan per kilogram, an increase of 2.9% over the previous week. Among them, the wholesale prices of spinach, celery, and cauliflower increased by 19.2%, 10.2% and 10.1 respectively. %.

"Pork supply continues to increase, and prices continue to fall by 1.9%." Dong Lijuan said, but with the support of the reserve pork purchasing and storage policy, the month-on-month decline was significantly narrowed by 11.7% from the previous month.

A reporter from Chinanews.com recently visited a supermarket in Xicheng District in Beijing and found that the prices of pork belly and Qianjian have not changed for several consecutive weeks.

What is the future trend of CPI?

According to the monitoring of the "National Agricultural Products Wholesale Market Price Information System", from July 30 to August 6, pork prices rebounded slightly by 0.4% month-on-month and 54.9% year-on-year after falling for several consecutive weeks; 19 kinds of vegetables in 286 wholesale markets across the country The average price increased by 7.4% month-on-month and 8.1% year-on-year.

"The national live pig inventory is at a high level, and pork prices are expected to continue to run at a low level. It is difficult to significantly increase the CPI; non-food prices tend to rise, but considering the poor transmission of PPI to CPI, the price increase of subsistence stays at a low level, and non-food prices are rising. The trend will be more moderate; after July, the CPI tail-end factor will decline. Therefore, the CPI will not have much pressure in the future, and the overall increase will remain moderate, and the increase may fluctuate around 1%." Liu Xuezhi, a senior macro analyst at the Bank of Communications Financial Research Center, told Zhongxin Net reporter.

“From the perspective of the three sectors that will affect the CPI in the next stage, food prices will have little pressure on the overall increase when there is another bumper harvest of grain and the price of pork remains stable; there is no basis for the prices of industrial consumer goods to continue to rise sharply; the prices of services are expected to remain A slight increase." Liu Aihua, spokesperson for the National Bureau of Statistics, pointed out that there are foundations and conditions for keeping prices rising moderately throughout the year.