China relies on industry to lead the economy

The Chinese campaign against premium technology companies such as Alibaba, Tencent, and Didi Global Inc. seems suicidal to Western investors, who see it as undermining China's growth, rather than dealing efficiently with the world's most successful technology companies. national 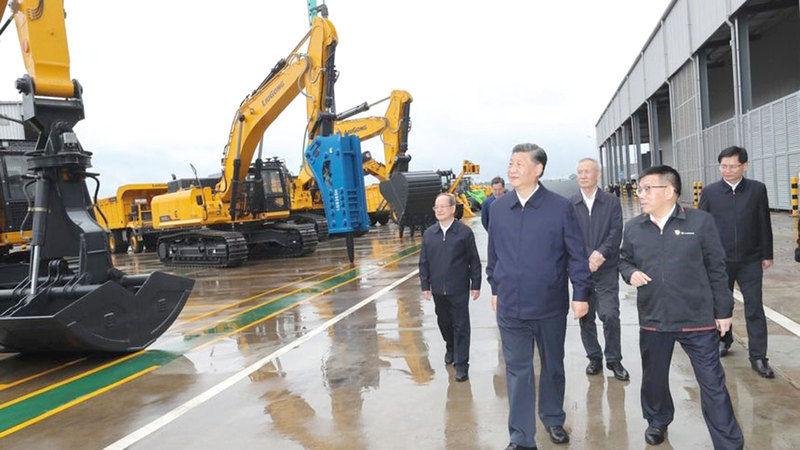 Attacks technology companies and provides support and protection for "industrial"

China relies on industry to lead the economy

The Chinese campaign against premium technology companies such as Alibaba, Tencent and Didi Global Inc. seems suicidal to Western investors, who see it as undermining China's growth, rather than dealing efficiently with the world's most successful technology companies.

In the view of Chinese President Xi Jinping, it is fine to own social media, e-commerce and internet companies, but “national greatness” depends on manufacturing the latest semiconductors, electric car batteries, and aircraft, to avoid deindustrialization and achieve autonomy from foreign suppliers .

As the Chinese Communist Party unleashes a regulatory attack on internet companies, it continues to flood manufacturers with subsidies and protections.

The Chinese president said that the Internet economy is booming, stressing that China should accelerate the construction of the digital economy and society, and digital government, but at the same time, the real economy is in the manufacturing industries, which is the foundation that cannot be abandoned.

Historically, with the development of most countries, manufacturing replaces agriculture, then services replace manufacturing, but the share of manufacturing in GDP has declined, in recent decades, in most advanced economies, especially in the United States and Britain, which witnessed the migration of large numbers of factory workers to abroad, especially to China, according to the Wall Street Journal.

While manufacturing's share of China's GDP has fallen over the past year, it remains higher than any other major economy, as the Chinese government does not want others to follow the path of deindustrialization.

"China cannot be like the United Kingdom, which has achieved great success in smart industries, while experiencing a decline in the intensity of research and development, and a global loss of the position of its largest companies," said a technical analyst in the research department of "Javikal Dragonomics", which focuses on Chinese studies. ».

The world's politicians tend to industrialize, unlike investors. Most manufacturing industries are fiercely competitive, and require huge amounts of capital and labor, all of which affect profits, but an Internet company targeting consumers can make big profits with the least additional investment.

This is why a company like Facebook is worth 11 times that of Micron Technology Inc., which makes semiconductors, even though Facebook employs only 50% of workers for the manufacturing company. China's Alibaba is worth 20 times the value of China National Semiconductor Manufacturing International, which is heavily subsidized by the Chinese government.

From the point of view of Chinese leaders, Internet companies impose costs on society that are not reflected in market values, and companies such as “Ali Baba” threaten the stability of the financial system, but online education fuels social anxiety, as online electronic games are “opium” for the mind. , as described by a state publication, this week.

Chinese leaders believe that industrialization confers social benefits. For decades, industry has been the way the state has created jobs, raised productivity, and spread essential skills.

Now, to achieve parity with the West, Chinese leaders believe that their country should be able to make the most advanced technology, using government subsidies, protectionism, and forced technology transfers to do so.

Here, American leaders can sympathize with that. They also worry that big technology is stifling competition, violating privacy, spreading disinformation, and encouraging Internet addiction. They are ready to emulate China in subsidizing manufacturers seen as essential to national security. The US government is taking a back seat to the markets, while in China the opposite is true.

China's domestic market cannot absorb everything its factories produce, as the surplus must be exported. However, whether the Communist Party's priorities make sense in the long run, the recent turmoil in Chinese stocks shows that they can make or break the future of companies in the short term. The state runs capitalism. To serve the interests of most people, the capitalists must understand their subordinate places in the system, or else they will suffer the consequences of their mistakes.