Nayuki's tea was filed for investigation, and the two places interviewed and ordered rectification

Chinanews.com client, Beijing, August 4 (Zuo Yuqing) Naixue's tea is on the hot search again, this time because of hygiene issues.   On August 2, it was reported by the media that the reporter undercovered Naxue’s tea job and found that Naxue’s tea in Beijing Xidan Joy City Store and Chang’an Shopping Mall had "cockroaches on the ground", "black mangoes", and "labels changed at will." "And othe 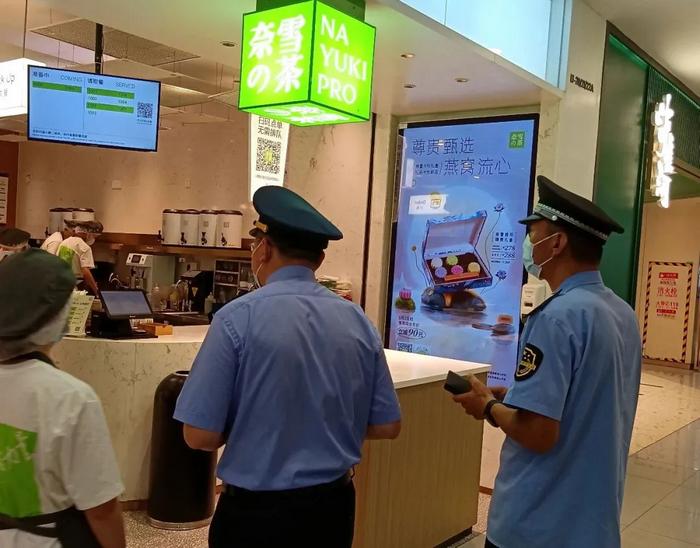 Chinanews.com client, Beijing, August 4 (Zuo Yuqing) Naixue's tea is on the hot search again, this time because of hygiene issues.

On August 2, it was reported by the media that the reporter undercovered Naxue’s tea job and found that Naxue’s tea in Beijing Xidan Joy City Store and Chang’an Shopping Mall had "cockroaches on the ground", "black mangoes", and "labels changed at will." "And other issues.

Currently, Xicheng District of Beijing has opened an investigation into this case.

On August 3, Beijing’s Xicheng District Market Supervision Bureau’s official account announced that in response to media reports on Naixue’s tea food safety, the Xicheng District Committee and District Government attached great importance to it. The enterprise ceased operations for rectification, and filed a case for investigation and severely investigated and dealt with.

It is reported that on the morning of August 3, the leaders of the Xicheng District Government of Beijing and the Xicheng District Market Supervision Bureau interviewed the leaders of Naixue’s tea companies and the people in charge of the shopping malls, and required relevant companies to earnestly fulfill their main responsibilities for food safety. Finding gaps in understanding, loopholes in systems, problems in implementation, and rectification of problems must be implemented in real ways and must be able to withstand social supervision.

On the same day, the Guangdong Provincial Market Supervision Bureau stated that it attached great importance to this, acted swiftly, and immediately deployed and carried out special risk inspections on tea shops and related Internet celebrity beverage shops in Naixue across the province, and cooperated with the Shenzhen Municipal Market Supervision Bureau. An interview was held at the tea headquarters of Nai Xue in Shenzhen.

As of 18:00 on August 3, a total of 1,787 law enforcement officers had been dispatched across the Guangdong Province to inspect 1,233 Naixue’s tea and similar stores, and issued 33 on-site rectification notices and 2 warnings.

During the interview, the Guangdong market supervision department required Naixue’s Tea to conduct a comprehensive self-examination and self-correction of all stores under its jurisdiction, and establish a ledger for the problems exposed by the media, self-examination, and the supervision and inspection of the market supervision department. Good rectification, and rectification within a time limit for the problems in this investigation.

Regarding the issues reported by the media, Nayuki's Tea responded in the morning on August 3rd: a special working group was established as soon as possible to conduct a thorough overnight investigation and rectification of the stores involved.

Regarding the use of blackened mangoes, Nayuki's tea said that if the relevant content was not seen in the report video, it will be further verified. If the situation is true, it will be dealt with seriously.

"About the day before the production time label was stamped: After investigation, it was indeed a mistake of the store partner who mistyped the time."

An explanation of Nayuki's tea on the morning of August 3.

The screenshot is from Nai Xue's tea response on the evening of August 3.

On the evening of August 3, Naixue’s Tea re-released the news that it had launched a comprehensive self-inspection of 603 stores across the country. In the self-inspection table of the store’s production process, the most missing items ranked the top three items:

There are stains on the floor and ceiling (including walls) of the operation area, and they are not kept clean; there is dust in the air-conditioning vent, and there is a slight peculiar smell in the sewer.

The sealing strips of refrigerating and freezing equipment are incomplete, and the cleanliness and hygiene of the equipment need to be strengthened. There is dust accumulation in the air outlet and filter.

The cleanliness and hygiene of some equipment, facilities and gadgets in the back kitchen need to be strengthened.

At the same time, Naixue’s Tea said that immediate cleaning and rectification of environmental sanitation failures will be carried out; stores across the country will be launched today to increase the frequency of elimination in August; management and control requirements for standards such as the receipt, storage and use of raw materials such as fresh fruits will be strengthened, etc. Wait.