The Hamriyah Free Zone Authority in Sharjah revealed that the agreement concluded by the authority with Aliyo Hydrofarms, which specializes in the production of fodder, during the activities of the 26th edition of the Gulfood 2021 exhibition, culminated in the company launching the first phase of its investment in the Al Shar Complex. 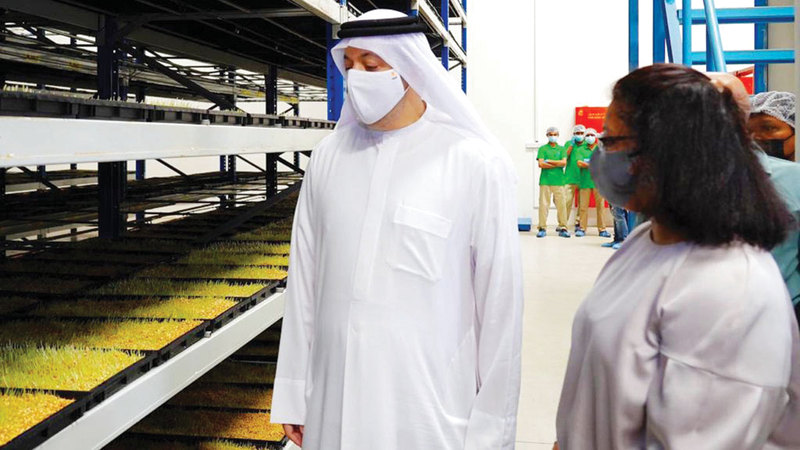 Al Mazrouei and the manager of "Alio Hydrofarms" during the inauguration of the two warehouses.

The Hamriyah Free Zone Authority in Sharjah revealed that the agreement concluded by the authority with Aliyo Hydrofarms, which specializes in the production of fodder, during the 26th edition of Gulfood 2021, culminated in the company launching the first phase of its investment in the Sharjah Food Complex. affiliated to Hamriya Sharjah, in preparation for the expansion in serving customers in the local and international markets, with the inauguration of two warehouses with a total area of ​​12,000 square feet and an investment value of about nine million dirhams, with a daily production capacity of 10 tons of organic feed.

The Director of the Hamriyah Free Zone Authority in Sharjah, Saud Salem Al Mazrouei, inaugurated the company's two warehouses, and was briefed on the company's products and innovative solutions, through the application of advanced technologies for hydroponics.

Aleo Hydrofarms is the first company in the country to implement an innovative concept using the latest technologies to produce and grow organic fodder for livestock in hydroponic farms.

Al Mazrouei said that attracting international companies with innovative specializations to be in Sharjah and make it a center for their operations in the region's markets is a priority for the authority, pointing out that this keenness is in line with the visions and directives of His Highness Sheikh Dr. Sultan bin Muhammad Al Qasimi, Member of the Supreme Council and Ruler of Sharjah, aimed at To consolidate Sharjah's position as a center for quality industries, and support plans for economic diversification in the emirate, by providing the best services to investors in a way that enhances the continued flow of foreign direct investment in various sectors.

Al Mazrouei pointed out that Alio Hydrofarms' investment in the Hamriya Harrat is an added value to the livestock sector at the level of the Emirate of Sharjah and the country in general, as it will meet the livestock breeders' need for feed in a sustainable manner, by providing high-quality green fodder to farmers, in line with The UAE's strategy to enhance food security and sustainability, and to ensure the flexibility and continuity of food supply chains.

He stressed that the "Sharjah Food Complex" is witnessing a remarkable growth in attracting the most important international companies specialized in the food industries that choose to invest on its land, due to the quality facilities it provides, an integrated business base, infrastructure and investment incentives that meet the aspirations of companies to build a strong presence within the global food sector. He pointed out that the complex includes about 1,700 companies, and is the first and largest integrated city for the manufacture and trade of foodstuffs and repacking and packaging at the state and regional levels, and extends over a total area of ​​more than 11 million square feet.

For her part, Taranum Malik, General Manager of Alio Hydrofarms, said that choosing the Hamriyah Free Zone to set up the new project came due to the distinctive and encouraging investment climate it offers to investors, and the ingredients it possesses that meet the company’s aspirations, and serve its goals and strategic plans, by taking advantage of the The competitive advantages that the region provides to serve local and international customers.

Taranum explained that the company is working according to targeted strategies that focus on reducing carbon emissions as much as possible, as well as reducing energy consumption, by producing feed through hydroponics with improved nutritional content, which is a better alternative to industrial feed, which contributes to reducing costs. Feeding livestock at a rate ranging between 20 and 45%.