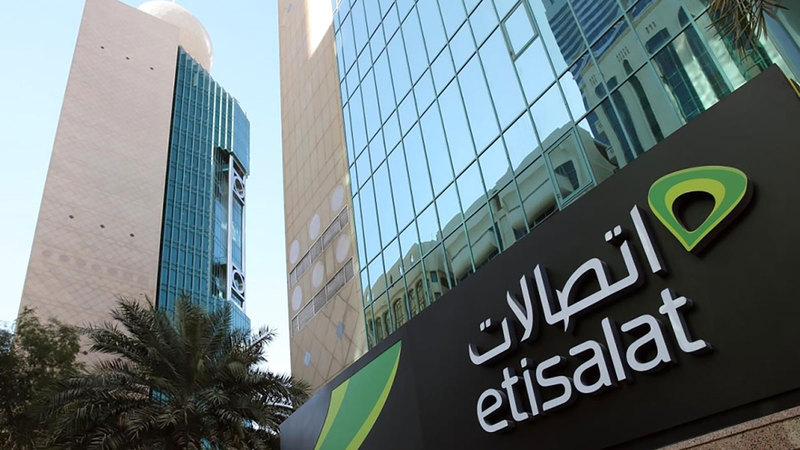 Etisalat Group announced yesterday its consolidated financial results for the first half of the year ending on June 30, 2021.

The financial results during the first half of 2021 showed that the subscriber base of the “Etisalat Group” reached 156.1 million subscribers, at a time when the value of the consolidated “Etisalat Group” revenues amounted to 26.4 billion dirhams, an annual increase of 3.2%, while its consolidated net profit after Federal franchise deduction of AED 4.7 billion, an annual increase of 3.9%, representing a net profit margin of 18%.

Etisalat Group's consolidated profit before interest, tax, depreciation and amortization amounted to 13.4 billion dirhams, with an EBITDA margin of 51%.

According to the statement, the Board of Directors approved the distribution of cash dividends to shareholders for the first half of 2021 at a value of 40 fils per share, at a time when the credit rating agencies “Standard & Poor’s Global” and “Moody’s” confirmed the high credit rating of “Etisalat Group” of AA-/Aa3, with a stable outlook.

Etisalat confirmed that it is successfully completing the process of issuing bonds worth one billion euros to refinance the outstanding bond tranche, pointing out that it is the strongest brand in the Middle East and Africa region in all categories, as well as being the fastest mobile phone network in the world under Ookla.

The Chairman of the Board of Directors of “Etisalat Group”, Jassim Mohammed Al Zaabi, said that “Etisalat” continues to achieve high levels of performance, which is confirmed by its financial results that show a growth in the company’s operations during the first half of this year 2021, due to the great and continuous efforts that The Group strives to achieve its vision of leading the digital future, unwavering commitment to the communities in which it exists, and creating value for its shareholders.

Al Zaabi expressed his confidence in Etisalat Group's ability to maintain its leadership in the telecommunications industry, while continuing to focus on strengthening its main business, and exploring new and promising growth opportunities, in a way that ensures its full readiness for the future with pioneering and innovative digital capabilities and solutions.

Al Zaabi thanked the state leadership for its continuous support to the telecommunications sector, and thanked the company's management team, which succeeded in embodying the digital vision and transferring it to reality, by continuing to focus on the group's long-term strategy to achieve added value to all shareholders and customers.

For his part, CEO of Etisalat Group, Engineer Hatem Dowidar, said that the group’s strong results during the first half of 2021 are the culmination of the company’s efforts to enable and enhance growth, and achieve operational efficiencies, with a firm commitment to the main strategic priorities to enable the digital future. And drive innovation across the group's various operations.

"Despite the challenges in our major markets, our operations continued to achieve growth in revenues, net profits and free cash flow," he added.

He continued: "We are proud of (Etisalat Group)'s main role in enhancing the UAE's leading position in the telecommunications sector, and contributing to making it the country with the fastest mobile phone network in the world, and among the best countries in the speed of fixed broadband connection, and in a way that meets the aspirations and aspirations of the country's leadership. of information and communication technology.”

He stressed that through its success in launching and deploying the 5G network, and its global leadership in achieving the highest penetration rate in the delivery of the optical fiber network to homes, Etisalat Group is fully prepared to continue its leadership of the next generation of mobile networks and technologies, pointing to the focus on strengthening The company’s capabilities, and maintaining its leadership position in the sector, thus contributing to achieving its long-term goals, especially those related to enriching the lives of customers, and empowering governments, companies and societies through its various international operations.

According to the operational results, the Etisalat subscriber base in the UAE reached 12.1 million subscribers during the first half of the year, while the total number of Etisalat Group subscribers reached 156.1 million, an annual increase of 7%.

The group's consolidated earnings before interest, tax, depreciation and amortization amounted to 13.4 billion dirhams, with an EBITDA margin of 51%.