China News Service, Beijing, July 25 (Cheng Chunyu, Zhang Xi, Xie Yiguan, Gong Hongyu) Recently, Hongxing Erke caused a heated discussion among the people due to the donation of 50 million yuan worth of materials to the disaster area in Henan. The product was snapped up "crazy", but some netizens questioned that the donated materials only had 200,000 bottles of mineral water that could be verifi 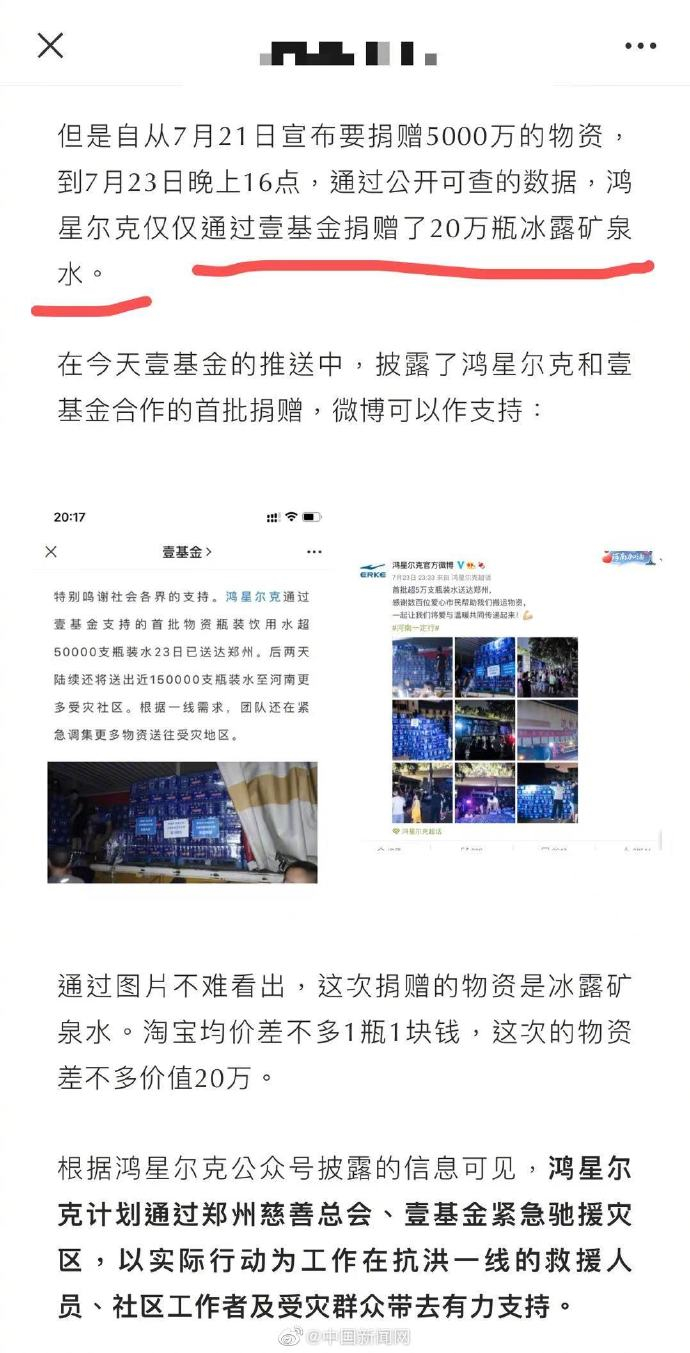 China News Service, Beijing, July 25 (Cheng Chunyu, Zhang Xi, Xie Yiguan, Gong Hongyu) Recently, Hongxing Erke caused a heated discussion among the people due to the donation of 50 million yuan worth of materials to the disaster area in Henan. The product was snapped up "crazy", but some netizens questioned that the donated materials only had 200,000 bottles of mineral water that could be verified.

A screenshot of an article published by an official account from the media.

In this regard, on the 25th, One Foundation’s official Weibo released the "Notes on Hongxing Erke’s Donation of 20 million in Materials", stating that a 20 million donation agreement was signed with Hongxing Erke on July 21, of which 2 million cash donations to Hongxing Erke have been allocated; According to the arrival situation and the needs of the disaster area, the first batch of more than 200,000 bottles of bottled water has been delivered to the disaster area.

"In addition, Hongxing Erke will donate 29 million yuan of materials in batches, and the Zhengzhou Charity Federation will publicize it to the outside world based on the actual amount of donated materials received and the time of donation." Minister Wang said.

A Weibo published by Hongxing Erke at 3:25 on the 25th showed that its materials worth 50 million were donated by Zhengzhou Charity Federation of 30 million and 20 million by One Foundation.

"It is being transported and distributed closely!" Hongxing Erke said that all the rewards in the live broadcast room will be donated to places where it is more in need.

On the 25th, a related person from Hongxing Erke also told Chinanews.com that the company will not accept interviews for the time being, and will first focus on doing a good job in disaster relief materials.

The company does not want to use too much media resources for publicity because of donations, and there will be special departments to connect with the media in the future.

Hongxing Erke became popular because of a donation Weibo published on the 21st: an emergency donation of 50 million yuan through Zhengzhou Charity Federation and One Foundation to help the disaster-stricken area in Henan.

Subsequently, the news that "Hongxing Erke had a huge loss in 2020, but spent 50 million yuan to help the disaster-stricken areas" continued to ferment on the Internet, and netizens left messages, "I feel like you are going to go bankrupt and you donated so much." I'm all anxious for you" "Everyone helps Hongxing Erke on the hot search".

In order to support Hongxing Erke, a large number of buyers have poured into Hongxing Erke's live broadcast room.

For example, in the Taobao live broadcast room with less than 10,000 viewers, the number of viewers directly exceeded 2 million on the 22nd, and one was on the shelves and one was sold out.

At present, the live broadcast room has soared to more than 10 million fans.

At around 1 am on the 25th, the number of online viewers in the live broadcast room still exceeded 19 million.

A reporter from Chinanews.com noticed that some products in the official flagship store of Hongxing Erke on platforms such as Jingdong Tmall Douyin have shown "sold out" or "out of stock" or "already sold out."

On July 24, in the live broadcast of Hongxing Erke Douyin, the staff was "forced" to play guitar and behave because of the lack of inventory. Netizens kept asking, "Put the box", "Put the label", "Put the shoe sole, and sew the shoe upper myself." "This is out of stock, I'll sew it myself for a tag."

The screenshot is from the live broadcast of Hongxing Erke Douyin.

According to multiple local media reports, Hongxing Erke’s offline stores were recently "crowded" by customers, and sales soared. Some people lined up to buy their products at the mall at 8 o'clock in the morning.

On the 25th, in a shopping mall in Zhuozhou City, Hebei Province, Hongxing Erke store was doing a 50% discount. The price of short-sleeved shorts was 50-100 yuan, and the price of shoes was 100-300 yuan.

"After the donation incident, I was completely too busy, especially after the weekend, and there were more people. Many people came rushing to buy things, and if this thing is out of stock, he will buy another one." The salesperson told Chinanews.com. Said that currently women's sports shorts and other items are out of stock, and some shoes and pants are out of size. The traffic in these two days is several times that of similar sports brands next door.

Two young female consumers said that they don't usually wear sportswear. They came here after seeing the donation of Hongxing Erke, and prepared to pair them with sportswear.

Another consumer said that it was not impulse consumption. He bought Hongxing Erke schoolbags in high school, and it did not break after many years.

Their prices are cheap, so they can only buy them when they see the style they like.

A store in Hongxing Erke.

However, in response to rumors that the company is on the verge of bankruptcy, in the early morning of the 25th, Hongxing Erke President Wu Rongzhao posted on Weibo, “In recent years, after positive adjustments with the team, certain benefits have been achieved. The transformation process is still very difficult. , But it's not as "on the verge of bankruptcy" as many netizens ridiculed."

According to media reports, in 2018, Hongxing Erke suffered a huge loss of 298 million yuan, and the loss in 2019 was reduced to 2.958 million yuan. Hongxing Erke did not disclose its 2020 financial report, and its financial data was only updated to the first half of 2020.

Wu Rongzhao, president of Hongxing Erke, appeared in the live broadcast room early in the morning on the 23rd.

Wu Rongzhao introduced that he started from Fujian in 2000 with meager funds and formally founded Hongxing Erke.

In 2003, there was a flood, half of the equipment and a large amount of raw material assets were flooded, and the factory struggled.

2008 encountered the financial crisis again, followed by another big fire in 15 years, which burned out half of the production equipment.

Regarding the attention raised by this donation incident, Wu Rongzhao said that he unexpectedly received a wave of support and care from netizens, and he felt flattered and a bit "trapped", besides being grateful or grateful!

In my heart, I feel the unity and gentleness of the Chinese people more deeply.