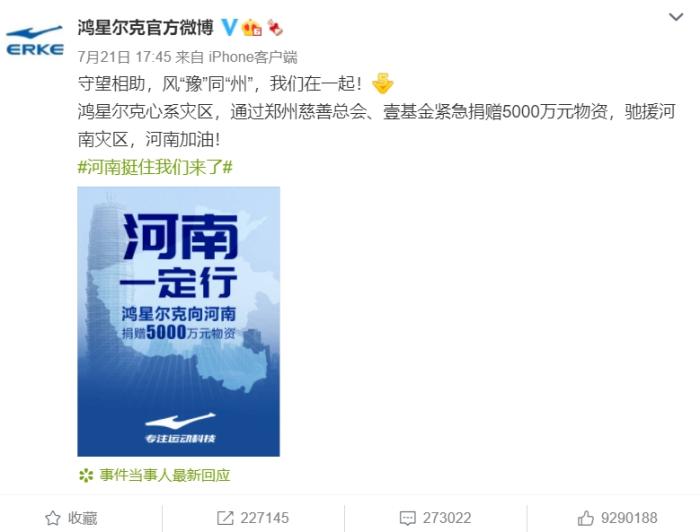 On July 21, Hongxing Erke issued a post on its official Weibo: Emergency donation of 50 million yuan through Zhengzhou Charity Federation and One Foundation to aid the disaster-stricken area in Henan.

The screenshot is from the official Weibo of Hongxing Erke.

Perhaps Hongxing Erke did not expect that he suddenly became popular because of this donation.

Some netizens found that "Hongxing Erke had a huge loss in 2020, but spent 50 million yuan to help the disaster-stricken areas." Then the news continued to ferment on the Internet, and netizens left messages, "I feel like you are going to go bankrupt and you donated so much." Under the promotion, I’m all anxious for you." "Everyone help Hongxing Erke on the hot search."

As the netizens wished, "Hongxing Erke's Weibo comments are so sad" ranked first in the Weibo hot search. At present, the Weibo topic has been read over 940 million.

At the same time, many related topics have also been screened on online platforms such as Douyin, Toutiao and Baidu.

As of press time, the number of donation messages released by Hongxing Erke on Weibo has exceeded 9.82 million, which is comparable to top stars.

As a result, some netizens said, "I learned about this from other popular Weibo accounts, and the company is very low-key and worrying."

"Hongxing Erke's membership has been refilled until 2140"

"I feel that your official Weibo accounts are reluctant to open Weibo members, but you donated 50 million the same as Anta, which is really amazing." Some netizens discovered that Hongxing Erke did not even charge Weibo members.

The financial report shows that Anta, Li Ning, Xtep International, and 361 Degrees have net profits of 5.162 billion yuan, 1.698 billion yuan, 513 million yuan and 415 million yuan respectively in 2020. Hongxing Erke, which is rumored to be losing money, donated the same amount as Anta.

Worried that Hongxing Erke has no money to refill Weibo members, so "Hongxing Erke's members have been refilled until 2140."

During the period, netizens became members of Hongxing Erke on the hot search several times.

For this reason, Hongxing Erke is determined to become a century-old brand, "otherwise I am sorry for the members sent by netizens."

The screenshot is from the official Weibo of Hongxing Erke.

In the early morning of July 25th, Hongxing Erke President Wu Rongzhao said on Weibo that in recent years, after positive adjustments with the team, certain benefits have been achieved.

The transformation process is still very difficult, but it is not "on the verge of bankruptcy" as many netizens ridiculed.

"The boss says to consume rationally" "We are wild consumption"

In order to support Hongxing Erke, a large number of buyers flooded into the live broadcast room of the official flagship store of Hongxing Erke on Tmall.

There was a live broadcast room with less than 10,000 viewers. On July 22, the number of viewers directly exceeded 2 million.

Netizens swiftly liked and commented, and called for "the most expensive".

At present, the live broadcast room has soared to more than 10 million fans.

There are also a large number of netizens and consumers in the e-commerce live broadcast rooms of platforms such as Hongxing Erke Douyin.

At around 1 o'clock on July 23, Wu Rong, who "don’t know where the lens is", illuminates the live broadcast room, thanking consumers, saying that “will continue to do good products and services in the future, and use quality as the proof of domestic products” and call on everyone to “consume rationally” ".

A reporter from Chinanews.com noticed that in recent days, the anchors of the live broadcast rooms of Hongxing Erke's various platforms have also frequently called on netizens to consume rationally, "our boss also said to consume rationally", and does not allow everyone to buy gifts or engage in hunger marketing.

However, netizens didn’t buy it. They left a message saying “Just take care of your nostalgia”, “Why don’t you don’t want us to spend rationally”, “We are wild consumption”, and complained about Wu Rongzhao, “Leave him alone, he has no business acumen”, “Your factory doesn’t have sewing machines "Smoke counts as we lose", "Buy it for my husband, and change my husband if I don't wear it."

The screenshot is from the Hongxing Erke Live Room.

After buying and buying by netizens, a reporter from Chinanews.com learned from the e-commerce platform that the sales volume of Hongxing Erke on Douyin from July 21 to July 23 has exceeded the total sales in the first half of this year; the sales of Hongxing Erke on Jingdong platform on the 23rd A year-on-year increase of over 52 times.

The screenshot is from Hongxing Erke Jingdong flagship store.

On July 23, a man even bought a 500 yuan product in a store in Nanjing Hongxing Erke, Jiangsu. He scanned the QR code and paid 1,000 yuan and then ran. The clerk reacted after he left. Now the clerk is looking for the man on the Internet.

On July 24, in the live broadcast of Hongxing Erke Douyin, the staff was "forced" to play guitar and behave because of the lack of inventory. Netizens kept asking, "Put the box", "Put the label", "Put the shoe sole, and sew the shoe upper myself." "This is out of stock, I'll sew it myself for a tag."

The screenshot is from the live broadcast of Hongxing Erke Douyin.

Hongxing Erke breaks the circle, they are "low-key" with fire

At around 1 am on the 25th, the reporter noticed that Hongxing Erke had more than 19 million online viewers in Taobao’s live broadcast room.

In the past few days, after Hongxing Erke broke the circle, "Donations from Michelle Ice City in Zhengzhou's disaster-stricken city" and "Noble Bird Donations" have also been pushed into hot searches.

This made netizens cry out for distress, "The Snow King himself is almost soaked and is still making donations, so loving." "Leave some money for yourself."

The Guirenniao announcement shows that the bankruptcy reorganization plan has just been implemented at the end of June 2021.

Netizen: I am losing money, and I don't forget to donate, "buy, buy, buy".

On the 24th, the sales volume of the precious bird and children's shoes on JD.com increased by more than 10 times from the 23rd.

The reporter noticed that there are many companies that have difficulties or donate low-key donations to fight floods.

However, just as the media commented that "Hongxing Erke cannot rely on waiting for hot searches", now is the era of consumption upgrades. Consumers pay more attention to the design and brand value of products. Enterprises need to put some effort in design and make good use of live broadcast, content e-commerce, etc. Marketing.

In the past few days, have you "chopped hands" for the Hongxing Erke?