Stable and strengthen, steady and positive! Introduction to agricultural and rural economic operation in the first half of the year

China News Service, July 20th. Zeng Yande, Chief Agronomist and Director of the Development Planning Department of the Ministry of Agriculture and Rural Affairs, pointed out on the 20th that the good situation of agricultural and rural economic development in the first half of the year has laid a solid foundation for the harvest of food and agriculture throughout the year. The 14th Five-Year Pla 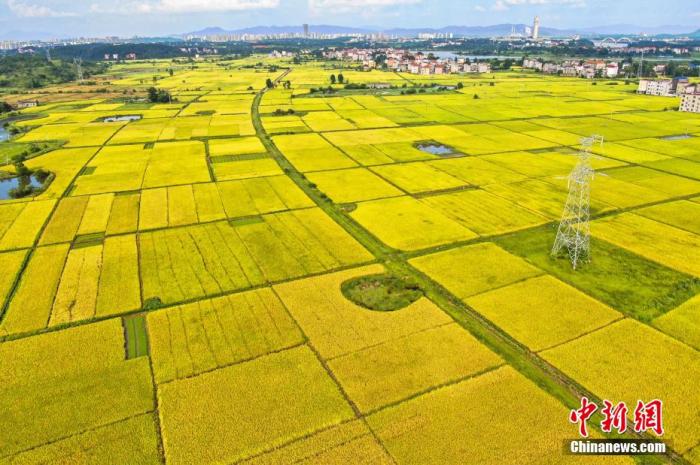 China News Service, July 20th. Zeng Yande, Chief Agronomist and Director of the Development Planning Department of the Ministry of Agriculture and Rural Affairs, pointed out on the 20th that the good situation of agricultural and rural economic development in the first half of the year has laid a solid foundation for the harvest of food and agriculture throughout the year. The 14th Five-Year Plan provides strong support for a good start and a good start.

The Ministry of Agriculture and Rural Affairs held a press conference on the 20th to introduce the operation of the agricultural and rural economy in the first half of the year.

Zeng Yande said that since the beginning of this year, the Ministry of Agriculture and Rural Affairs has been closely focusing on the largest of the country, focusing on the main task, focusing on the central deployment, and focusing on grain production. Expanding the results of poverty alleviation, coordinating and doing various tasks in agriculture and rural areas, and strengthening and improving the stability of the agricultural and rural economy have provided strong support for the stable development of the national economy and the sustained stability of the overall social situation.

First, the output of summer grains hit a record high.

The first is to achieve "three increases" in area, yield, and total output.

The area of ​​summer grain increased by 3.982 million mu this year, reversing the downward trend for five consecutive years.

The yield per mu was 367.7 kg, increasing for three consecutive years, and the output was 291.6 billion jin, an increase of 5.93 billion jin over the previous year, both hitting a record high.

The second is continuous quality optimization.

The area of ​​high-quality special-purpose wheat accounted for 37.3%, an increase of 1.5% over the previous year.

The third is to reduce harvest loss.

The wheat machine yield rate exceeded 98%, and the machine harvest loss rate in the main producing areas dropped by more than 1 percentage point.

In addition, nearly 70% of the early rice harvest is also showing an increase in yield.

The area of ​​autumn grain has increased and its growth is normal, and there is a good foundation for a bumper grain harvest throughout the year.

Second, there is an adequate supply of "vegetable basket" products.

Live pig production has fully recovered. According to statistics from the National Bureau of Statistics, at the end of June, there were 45.64 million reproductive sows in the country, equivalent to 102% of the end of 2017, and 439 million pigs, returning to 99.4% of the end of 2017.

In the first half of the year, the pork output was 27.15 million tons, an increase of 35.9% year-on-year, and the supply and demand situation continued to improve.

The market for vegetables and fruits is abundant, and prices fall seasonally.

Third, the green transformation of agriculture continues to advance.

The “10-year ban on fishing” in the Yangtze River has a good start. More than 6,800 vessels and 186,000 illegal nets have been cleaned up and banned. The management of bans has been generally stable. The fishermen withdrawing fishing have basically realized conversion to employment and social security policies have been implemented .

Cultivated land quality construction and protection have been further strengthened, with more than 72 million mu of conservation farming on black soil in Northeast China implemented, exceeding the annual target of more than 2 million mu.

Relying on agricultural and rural resources, extend the industrial chain, expand the multiple functions of agriculture, and continue to promote the development of rural industries.

Fifth, the income of farmers has increased rapidly.

We insist on maintaining stable production and supply, and increasing employment and income with one hand, and take multiple measures to increase farmers' income.

In the first half of the year, the per capita disposable income of rural residents reached 9,248 yuan, an actual increase of 14.1% after deducting price factors, which was 3.4 percentage points higher than the growth rate of urban residents’ income.

At the same time, the characteristic industries in poverty alleviated areas have developed steadily, and the employment situation of poverty-stricken laborers has been good. More than 30.6 million people out of poverty have been promoted to work. The income growth rate of poverty-stricken people continues to be higher than the national rural average.

The scale of agricultural investment expanded. The fixed asset investment in the primary industry was 656.4 billion yuan, a year-on-year increase of 21.3%, which was 5 and 10.6 percentage points faster than the secondary and tertiary industries respectively.

Rural consumption has rebounded steadily. The retail sales of rural consumer goods reached 2,780.7 billion yuan, a year-on-year increase of 21.4% and an average growth rate of 4% in two years.

The potential of domestic demand in rural areas has been continuously released, and its role in stimulating economic development has continued to increase.

Seventh, the construction of rural areas is progressing steadily.

Orderly promote the improvement of rural human settlements, organize and carry out village cleaning activities, coordinate the promotion of rural toilet improvement, domestic sewage and garbage treatment, and create a number of beautiful and livable villages.

At the same time, we will continue to deepen rural reforms, steadily promote the extension of the 30-year trial after the expiration of the second round of land contracts, and complete the reform of the joint-stock cooperative system for collective operating assets of 530,000 villages.

Zeng Yande emphasized that, in general, the good situation of agricultural and rural economic development in the first half of the year has laid a solid foundation for the harvest of food and agriculture throughout the year, and provided strong support for a good start and a good start in the "14th Five-Year Plan".

However, we must also realize that the development of agricultural and rural economy is still facing major pests and diseases, threats of meteorological disasters, live pig production markets and epidemic risks, and the instability of the international agricultural product market. We need to take effective measures to solve them.

He said that in the next step, the Ministry of Agriculture and Rural Affairs will resolutely implement the decisions and deployments of the Party Central Committee and the State Council, strengthen policy measures, push forward one by one, pay close attention to implementation, ensure that grain output remains above 1.3 trillion catties, and resolutely defend against scale. The bottom line for poverty return, high-quality completion of various goals and tasks for agricultural and rural development.