RRR cut + MLF + reverse repurchase! The over 1 trillion "package" is here, how does LPR go?

Sino-Singapore Jingwei Client, July 15th, on the 15th, the first full-scale RRR cut was implemented this year, and the RRR cut released about 1 trillion yuan in long-term funds. On the same day, the central bank carried out the 100 billion yuan medium-term loan facility (MLF) operation and the 10 billion yuan reverse repurchase operation and the winning bid rate remained unchanged.   Screenshot 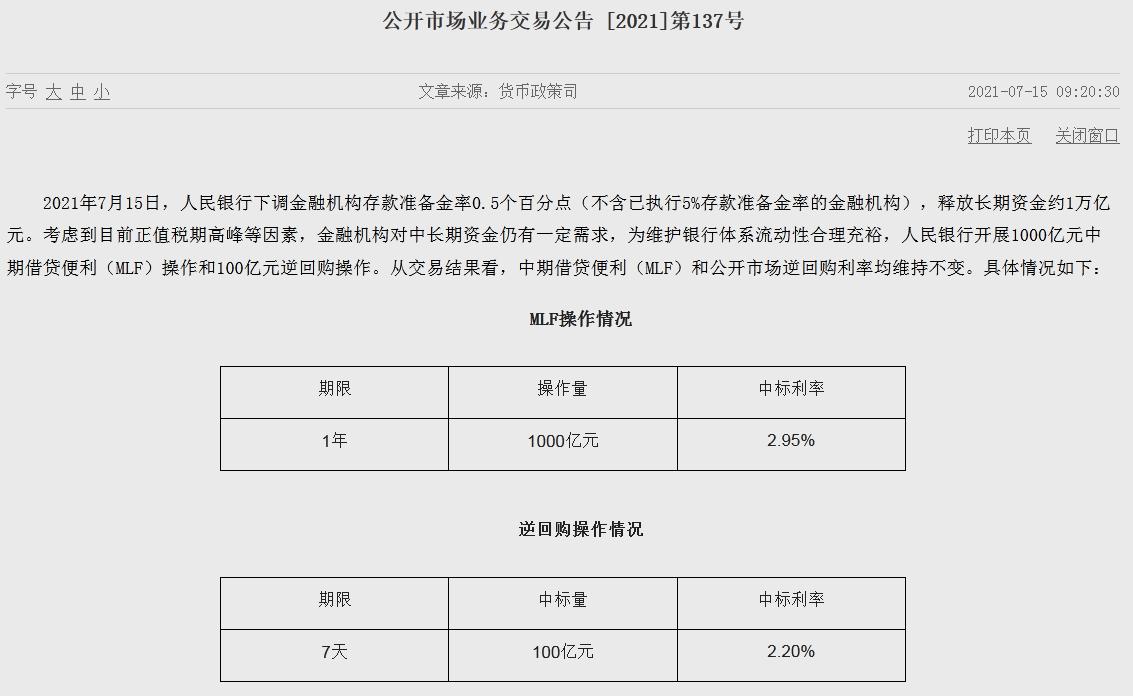 Sino-Singapore Jingwei Client, July 15th, on the 15th, the first full-scale RRR cut was implemented this year, and the RRR cut released about 1 trillion yuan in long-term funds.

Taking into account the current peak of the tax period and other factors, financial institutions still have a certain demand for medium and long-term funds. In order to maintain a reasonable and sufficient liquidity in the banking system, the People's Bank of China has carried out 100 billion yuan MLF operations and 10 billion yuan reverse repurchase operations.

Judging from the transaction results, both the MLF and open market reverse repurchase rates remain unchanged.

MLF is one of the central bank's open market operations, and it is a monetary policy tool that provides medium-term base currency to commercial banks and policy banks.

Dong Ximiao analyzed that for some time to come, my country's monetary policy will still adhere to a prudent tone and maintain continuity, stability and sustainability.

Taking into account the large number of MLF maturities in the second half of the year, the central bank may continue to implement RRR cuts 1-2 times during the year.

Regarding the new round of LPR interest rates to be announced on July 20, Zheshang Securities mentioned in the research report that the bank’s comprehensive funding cost can be reduced by replacing the maturity MLF with a RRR cut (similar to April and October 2018). This leads to a downward trend in the financing costs of LPR and the physical sector.

There is the possibility of a subsequent decline in LPR. A comparable typical case is that the central bank adopted a comprehensive RRR cut in September 2019. Although the MLF interest rate was not lowered that month, the 1-year LPR quotation fell by 5BP, which reflects that the RRR cut has reduced the overall bank. capital cost.

The deputy director of the CITIC Securities Research Institute and the chief FICC analyst clearly stated that based on historical experience, since the LPR reform, the two full-scale RRR cuts have driven the arithmetic average of the quotes downward, but because one of the changes is less than the minimum adjustment step of LPR , So the LPR remained unchanged for the month.

Obviously, there is still uncertainty about the downward trend of LPR, and the adjustment space may be relatively limited.

In general, the impact of RRR cuts and deposit benchmark interest rate cuts on the cost of funds of commercial banks is expected to drive LPR quotations lower.

The reform of the deposit benchmark interest rate directly refers to the cost of bank liabilities, and the subsequent RRR cut is expected to release about 1 trillion yuan in long-term funds for the market.

The two factors of "volume" and "price" are superimposed at the same time. Even if the MLF interest rate is not adjusted, the increase can be effectively reduced, which will form a relatively powerful push for the downward trend of LPR.