Recently, outlets and cooperative societies offered early discount offers for the Eid al-Adha season, with rates ranging between 30 and 70%. Officials of retail outlets indicated to "Emirates Today" that the offers that were provided in large quantities include expanded categories of food commodities, meat, poultry and vegetables. 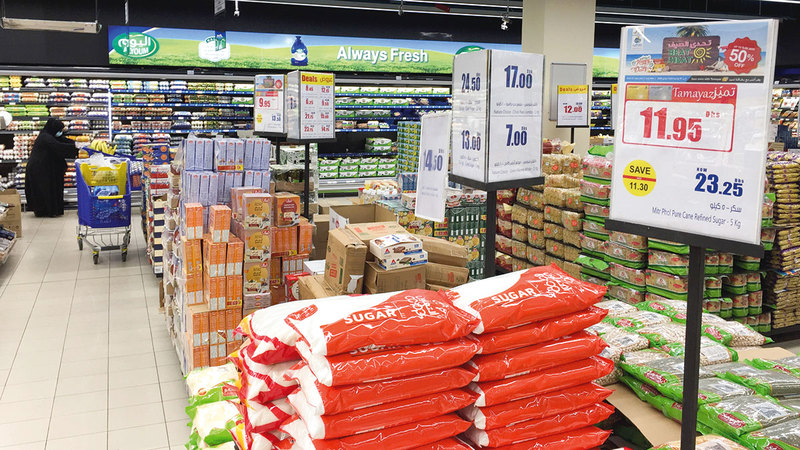 Recently, outlets and cooperative societies offered early discount offers for the Eid al-Adha season, with rates ranging between 30 and 70%.

Officials of retail outlets indicated to "Emirates Today" that the offers that were provided in large quantities include expanded categories of food commodities, meat, poultry, vegetables and fruits, in addition to products that are in increasing demand during the Eid season, such as candy and chocolate, noting that the launch of the offers during Early times, which comes within the framework of preventing congestion in outlets before the Eid and providing various times for consumers to shop for Eid supplies.

In turn, consumers reported that the diversity of goods included in the Eid offers and their early offering, contributed to obtaining food and consumer goods at discounted prices.

In detail, the consumer, Samer Abdullah, said that "the offers on the market included a variety of goods and brands, which is reflected positively on purchasing the needs of families."

The consumer, Ahmed Saeed, added that "the early offering of discount offers, which came in large proportions before the Eid al-Adha season, supports the acquisition of various commodities at low prices."

The consumer, Muhammad Abdulaziz, pointed out that “the discount offers for Eid al-Adha are more extensive than those of last year, as they included more discounts on meat and poultry products, in addition to consumer and personal care goods.”

In turn, the Director of Community Relations and Public Relations at the Sharjah Cooperative, Faisal Khaled Al Naboodah, said that the cooperative offered early discount offers, in preparation for the Eid al-Adha season, with discounts of up to 70%, pointing out that the offers included dairy products, meat, poultry, vegetables and fruits. juices, sweets and chocolates.

He added that "the offers that started from yesterday and continue until the 24th of this month, were put up early to allow consumers the opportunity to shop for their needs, and to avoid congestion in outlets ahead of Eid."

For his part, the official spokesman for the "Aswaaq" group centers, affiliated with the "Dubai Government Investment Corporation", Abdul Hamid Al Khashabi, said that "discount offers were offered in the framework of preparations for the Eid al-Adha season, with discounts ranging between 25 and 50 percent on basic food and consumer goods," pointing out He pointed out that "the extended discount offers were launched early to allow more space for consumers to shop at different times and not to congestion in outlets before Eid."

And he indicated that "a sufficient stock of discount goods was provided to keep pace with the needs of consumers during that period, which is usually witnessing a growth in consumer demand."

In turn, the Director General of the Emirates Cooperative Society, Mohammed Yousef Al Khaja, said that "the cooperative will switch from summer offers to discount campaigns, starting today, Thursday, with discounts ranging between 30 and 70 percent."

He pointed out that "the offers include discounts on food commodities such as edible oils, meat, poultry, dairy products and juices, in addition to products that are in high demand before and during the days of Eid."

For his part, Director of Marketing and Happiness Department at Union Coop, Dr. Suhail Al Bastaki, said that the cooperative offers discounts on the occasion of the Eid season, with a rate of up to 65% on more than 1,500 food commodities, most notably vegetables, fruits, dairy products, meat, sweets, spices, rice and oil. And many other products.

He pointed out that "the cooperative announced the allocation of nearly five million dirhams for the Eid Al-Adha offers, as the campaign of discounts begins today and will continue until the 28th of this month."

Ibrahim Al-Bahr, a retail trade expert and director of “Al Bahar Consulting” Company, considered that “the offering of expanded offers during the Eid al-Adha season is due to the high level of competitiveness among retail outlets,” noting that “increasing competitiveness in the sector is one of the most important variables.” caused by the Corona pandemic, which led to a diversification and increase in the offers offered at rates that exceed their counterparts during the pre-pandemic years.”