The CPI of 31 provinces was released in June: 27 land gains fell! Sichuan saw the biggest drop

China-Singapore Jingwei Client, July 13th (Wang Yongle) The National Bureau of Statistics recently announced the Consumer Price Index (CPI) of 31 provinces in June 2021. The data shows that the year-on-year increase in CPI in June in 27 provinces has fallen, and the largest decrease in Sichuan is 0.7 percentage point. 27 provinces rose back down Sichuan saw the biggest drop   In June, the nat 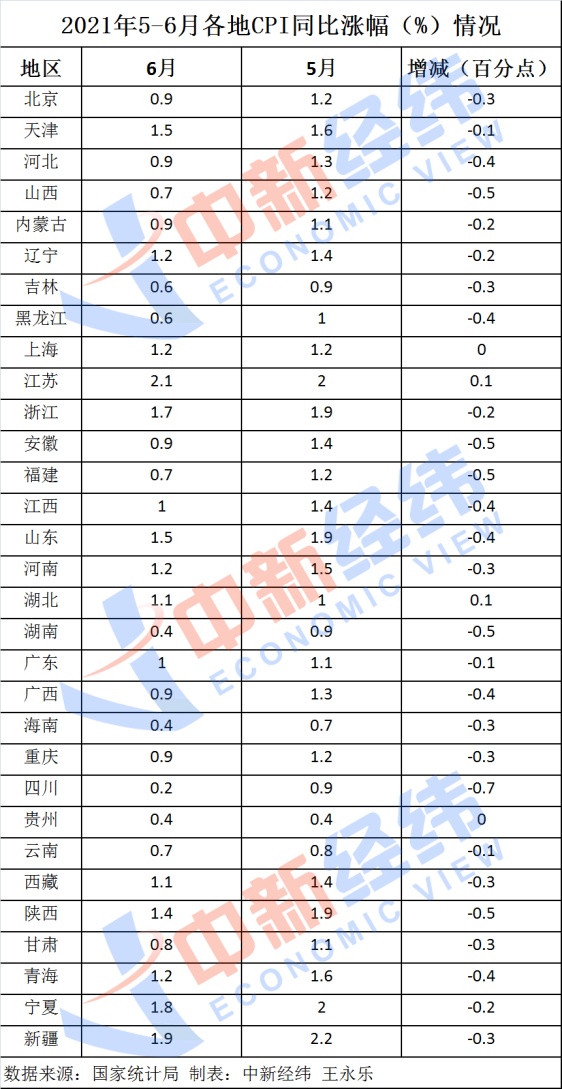 China-Singapore Jingwei Client, July 13th (Wang Yongle) The National Bureau of Statistics recently announced the Consumer Price Index (CPI) of 31 provinces in June 2021. The data shows that the year-on-year increase in CPI in June in 27 provinces has fallen, and the largest decrease in Sichuan is 0.7 percentage point.

27 provinces rose back down

In June, the national CPI fell back from a 1.3% increase in the previous month to an increase of 1.1% year-on-year.

From a month-on-month perspective, CPI fell by 0.4%, an increase of 0.2 percentage points from the previous month.

The Sino-Singapore Jingwei client combed and found that, in terms of regions, the year-on-year growth rate of CPI in 27 provinces including Beijing, Tianjin, Hebei, Shanxi, and Sichuan fell back in June, while Shanghai and Guizhou remained the same, while Jiangsu and Hubei both increased by 0.1%.

Among the 27 provinces mentioned above, 20 provinces have fallen more than the national level.

Among them, Sichuan had the largest decrease of 0.7%, Shanxi, Anhui, Fujian, Hunan, Shaanxi and other five places fell by 0.5%, Heilongjiang, Jiangxi, Shandong, Hebei, Guangxi, Qinghai and other six places fell by 0.4%, Jilin, Tibet, Beijing, Henan, Hainan, Chongqing, Gansu and Xinjiang dropped by 0.3%.

Although the CPI in Jiangsu and Hubei increased slightly year-on-year in June, the CPI declined month-on-month.

The Everbright Macro Research report pointed out that the year-on-year increase in CPI in June fell slightly, mainly due to the expansion of pork prices, the convergence of service prices, and the relatively limited impact of consumer product prices by the rise of raw materials.

The decline in pig prices was mainly due to the continuous recovery of live pig production capacity, the concentrated production of pigs for slaughter in the early stage, and the weak seasonal demand.

The month-on-month increase in non-food CPI in June changed from 0.2% in the previous month to the same level, mainly due to the weak recovery of terminal demand, the off-season travel season, and the impact of local epidemics, and the prices of related consumer goods and services fell.

According to the analysis of the macro team of the Caixin Research Institute, the pig cycle is the main reason for the decline in CPI in June. It is expected that the CPI will increase by 0.8% year-on-year in July, and the core CPI will rebound. The central level for the whole year will be around 1.3%.

Fan Ruoying, a researcher at the Bank of China, believes that CPI growth will fall at a low level: First, the recovery of the pork industry chain is superimposed on the impact of the high base of the previous year. The stock of reproductive sows is still rising at a high level, and pork prices may continue to drop.

However, the country has recently started pork purchasing and storage, and it is estimated that the decline in pork prices will moderate.

Second, the CPI tail-lifting factor weakened, which was 0.4% in July, which was significantly lower than that in June.

The China Everbright Macro Research report predicts that the CPI will maintain a moderate rise, and the trend in the second half of the year will be low and then high.

First, this year's live pig supply environment is still improving. However, considering the increase in seasonal demand for pork consumption, coupled with measures such as purchasing and storage to stabilize pig prices, it is expected that pig prices will enter a phased low. Taking into account the base effect, the food CPI in the second half of the year will increase year-on-year. Presents low before and high afterwards.

Second, the residents' willingness to consume is gradually recovering, which will drive the non-food CPI to continue to rise year-on-year in the second half of the year.

However, considering that terminal demand has not stabilized, the transmission of price increases in the service industry or raw material prices to CPI consumer products is relatively limited.

Wang Qing, chief macro analyst at Oriental Jincheng, believes that judging from the historical purchasing and storage effects, the current pork price has entered the bottom area, which means that the month-on-month drop in food prices in July will be significantly narrowed, but due to pork prices in the same period last year The base figure has risen sharply, and it is expected that food prices in July will continue to maintain a negative growth year-on-year, while non-food prices will continue to increase slightly.

The transmission of high PPI growth to CPI will still be blocked, and the "scissors gap" pattern of PPI and CPI will continue in the short term.