17 billion dirhams, gains in Abu Dhabi shares in the first trading of the week

The Abu Dhabi Securities Exchange began trading at the beginning of the week, yesterday, with more upside, amid an increase in the pace of liquidity flowing into the trading floor, which reflected the high confidence in market transactions in greater proportions, especially by foreign and local investment portfolios. 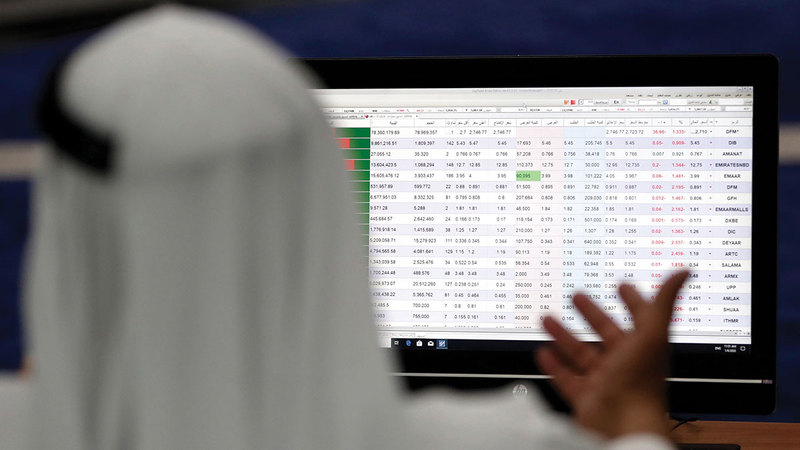 Yahsat shares will be listed for trading next Wednesday

17 billion dirhams, gains in Abu Dhabi shares in the first trading of the week

A slice of the stock is on its way to achieving new price breakthroughs.

The Abu Dhabi Securities Exchange began trading at the beginning of the week, yesterday, with more upside, amid an increase in the pace of liquidity flowing into the trading floor, which reflected the high confidence in the market's transactions in greater proportions, especially by foreign and local investment portfolios.

The daily monitoring of transactions shows that a segment of shares is on the way to achieving new price breakthroughs, which justifies the increase in the volume of trades executed on them in the last hour of the session, which raised the total value of market trading to approximately 1.28 billion dirhams.

The great activity witnessed on the first day of the week's trading contributed to the success of the market value of the shares of the listed companies, providing the treasury with gains of 17 billion dirhams, according to the statistics issued by the market.

The general index of the Abu Dhabi Stock Exchange, closed at the level of 6993 points, an increase of 0.43%, compared to last Thursday's session.

The "Alpha Abu Dhabi" share emerged during the session to new price levels, the first since the listing, amounting to 22.5 dirhams, which may indicate a rise to higher levels in the coming days, and the value of the transactions concluded on it reached 139 million dirhams.

The shares of «International Holding Company» closed at 126.3 dirhams, with a trade value of 345 million dirhams.

The shares of four companies succeeded in reaching the maximum permissible daily limit, led by the share of Ras Al Khaimah Cement, which closed at 3.11 dirhams, and “Baldco” 33 fils, in addition to the “Al Qudra Holding” share of 1.29 dirhams, and “Abu Dhabi Shipbuilding” 4.25 dirhams.

It is noteworthy that yesterday's session witnessed trading of 210 million shares, executed through 4732 transactions, according to the figures issued by the market.

In addition, the Abu Dhabi Securities Exchange announced that the listing of the shares of Al Yah Satellite Communications Company (Yahsat) for trading will take place in the main market as of next Wednesday, under the symbol “YAHSAT”.

This is the second listing of its kind in the Abu Dhabi market during 2021, when in June the Alpha Abu Dhabi Holding Company was listed.

The market clarified, in a circular posted on the website, that trading in the company’s shares outside the trading halls will be halted as of the date of its listing in the market, and that any trading process that takes place on its shares outside the market from that date is considered void, and the transfer and transfer of ownership of shares resulting from these operations.

And Yahsat set the final offer price of the shares at the end of last week at 2.75 dirhams per share.

The capital of "Yahsat" is 2439.77 million dirhams, with a nominal value of one dirham per share.