Mining in the currency circle ushered in the strictest supervision Our reporter Li Hualin   After Inner Mongolia took the lead in responding to the “combat Bitcoin mining and trading” proposed by the Financial Stability and Development Committee of the State Council, recently, Qinghai, Xinjiang, Yunnan, Sichuan and other places issued relevant policies to rectify and clean up virtual currency 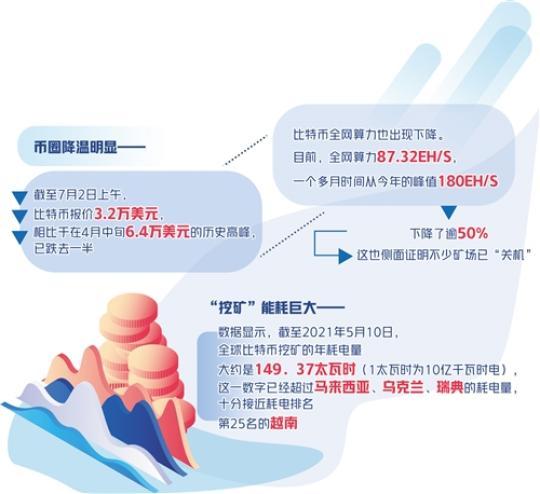 Mining in the currency circle ushered in the strictest supervision

After Inner Mongolia took the lead in responding to the “combat Bitcoin mining and trading” proposed by the Financial Stability and Development Committee of the State Council, recently, Qinghai, Xinjiang, Yunnan, Sichuan and other places issued relevant policies to rectify and clean up virtual currency “mining”.

The virtual currency "mining" market ushered in the strictest supervision in history.

Under strong supervision, some trading platforms announced the suspension of services in China, some "mines" moved overseas, and some "miners" moved "underground".

Experts believe that the closure of "mining" in many places will release a clear signal of real and strict supervision. The next step of stronger supervision measures may be introduced soon. Whether it is an institution or an individual, the hype of virtual currency will face greater risks. .

Strike from the source

The high energy consumption of "mining" has been criticized by environmentalists.

"Mining" is not only time consuming, but also consumes a lot of electricity.

In order not to fall behind in the computing power competition, "miners" have increased the use of large computing power mining machines, resulting in a sharp increase in power consumption.

According to data released by the University of Cambridge Bitcoin Power Consumption Index, Bitcoin “mining” consumes about 133.68 terawatt-hours of electricity each year, which exceeds the national electricity consumption in Sweden in 2020.

Another data released by Cambridge University's Emerging Finance Center shows that in the global distribution of Bitcoin computing power, my country ranks first with more than 60% of the computing power.

And these "mines" are mainly concentrated in areas with sufficient electricity and relatively cheap electricity, such as Sichuan, Inner Mongolia, Yunnan, Xinjiang and other places.

"This is contrary to my country's major strategic decision." Dong Ximiao said that my country has announced that it will strive to achieve carbon peaks by 2030 and carbon neutrality by 2060. "Mining" obviously violates this goal and task.

"It is worth noting that at present, many'mining' companies use the guise of'big data projects, blockchain projects, and supercomputing centers' to defraud local governments for support, causing serious waste of public resources." Dong Ximiao said , Proposed to combat Bitcoin "mining" and transaction behavior, not only for the prevention and control of financial risks, but also for the actual practice of green development.

Experts believe that under strong supervision, the entire "mining" ecology will be severely hit.

"The profits of'mining' companies are generally related to the price, computing power and difficulty of virtual currencies. The clear domestic crackdown on bitcoin transactions and'mining' may lead to a decline in the profitability of the bitcoin industry, which in turn will be transmitted to the'mining' industry chain , Mining machine prices may plummet, and it is not ruled out that some transactions and "mining" activities are transferred overseas." said Zhou Maohua, an analyst at the Financial Market Department of China Everbright Bank.

At present, the most responsive platform is the platform that provides various "mining" services, and multiple platforms are "unplugging network cables" quickly.

"Mining" platform Mars Cloud Mine previously announced that some of its mining machines will be transferred to Kazakhstan mines.

There are also some mines planning to relocate. The main destinations are Russia, Canada, etc. These places are large and sparsely populated, with sufficient energy sources, and relatively loose supervision.

There are also people who believe that regulation has hit the "mining" industry more severely, but it is not fatal.

The reporter learned that most domestic mines have not yet been transferred, and they are still in the wait-and-see stage. The transfer cost of mines is high. In addition to mining machines, there are supporting cooling cabinets and other equipment. In addition, they need to adapt to foreign regulatory policies and manpower. Costs, rebuilding factories, etc.

Therefore, some mine owners pin their hopes on the implementation of policies in various places. If the policies are implemented loosely, there is still room for survival.

For this fluke psychology, Dong Ximiao said that relevant agencies must have a clear understanding and abandon their illusions. “The State Council’s first explicit request for crackdowns on Bitcoin'mining' and transactions is undoubtedly a real move. It is estimated that the follow-up will be released soon. With stronger and more targeted supervision measures, supervision will only be stricter and will not be relaxed."

"For localities, they must strictly follow the deployment of the State Council to strengthen supervision and resolutely implement relevant policies." Dong Ximiao said that localities should not relax policy implementation due to their own interests, and should resolutely stop "mining" investment promotion and adopt comprehensive measures to promote it. Existing "mining" companies withdrew in an orderly manner.

Improve supervision from the legal level

At present, our country is strengthening the supervision of virtual currency from various aspects.

In addition to "mining" being encircled by supervision, virtual currency exchanges and some well-known cryptocurrency giants have also been "blocked" by search platforms and social platforms.

Reporters searched for exchange terms such as "Huobi" and "Binance" on Sina Weibo, Baidu and other platforms, and were all prompted "According to relevant laws, regulations and policies, the search results are not displayed."

Under strong supervision, the fanatical currency circle has obvious signs of cooling down.

As of the morning of July 2nd, Bitcoin was quoted at US$32,000, which has fallen by half compared to the historical peak of US$64,000 in mid-April.

However, despite the heavy regulatory blow, there are still people who insist on the "Bitcoin faith" and frequently release "buy dip" signals on the Internet, claiming that "the last plunge is the beginning of the next skyrocket" and calling on everyone to run and "enter".

Some people evade the supervision of "mining" by purchasing cloud computing power.

"It is urgent to rectify the chaos of virtual currency'mining' and transactions." Dong Ximiao said that first of all, laws and regulations must be improved. "Currently, personal transactions such as bitcoin,'mining' or using clean energy'mining' are not illegal. There is no clear legal definition. The main basis for supervision is documents issued by relevant associations and departments. The next step should be to make up for legal deficiencies as soon as possible to make supervision more deterrent."

Secondly, for institutions that illegally participate in virtual currency transactions, hype or provide support services for them, judicial departments and law enforcement agencies must form a linkage to avoid the phenomenon of supervision by pressing the gourd and floating.

Zhou Maohua also believes that in the future, it is necessary to speed up the filling of regulatory shortcomings, and the regulatory authorities and financial institutions will form a joint force to improve regulatory efficiency.

At the same time, it is necessary to further track the development of virtual currency technology, increase technological innovation, further promote the digital renminbi, and maintain the sovereign status of legal tender.