Officials in the retail sector in the country confirmed that there is currently a noticeable demand for shopping centers, and a growth in sales, supported by the start of the holiday season and summer vacations and the preparation for travel, as well as the intensification of competition in offering discount offers, in addition to the reassurance of the health situation. 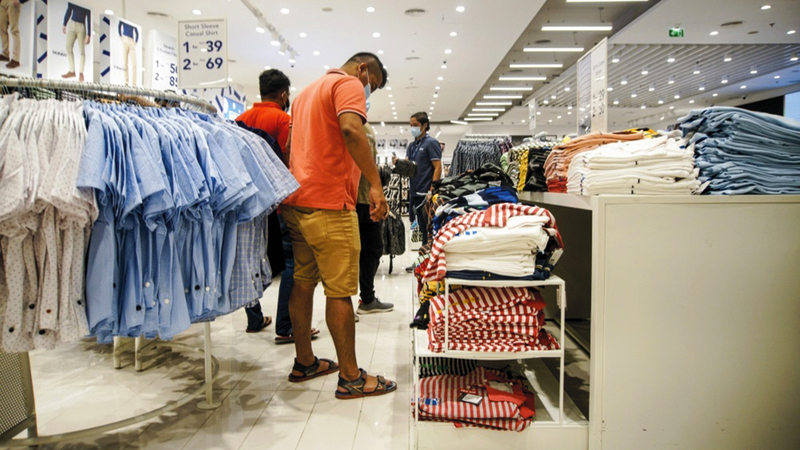 With the intensification of competition in offering discount offers... and reassurance of the safe health situation in the country

Officials in the retail trade sector in the country confirmed that there is currently a noticeable demand for shopping centers, and a growth in sales, supported by the start of the holiday season and summer vacations and the preparation for travel, as well as the intensification of competition in offering discount offers, in addition to the reassurance of the safe health situation in the country after the intensification of operations Get vaccinated and strictly enforce precautionary measures.

They told "Emirates Today" that sales rose in varying proportions during the current summer season, reaching rates close to those in the pre-pandemic period, noting that sales are generally focused on clothes, foodstuffs, electronics, travel bags, gifts and perfumes.

In detail, the Director General of the Emirates Cooperative Society, Muhammad Yousef Al Khaja, said that the retail trade centers in the country recently witnessed a remarkable rise in turnout and a growth in sales with the beginning of the holiday season, which made sales levels currently close to or similar to their pre-Corona levels. During the summer of 2019.

Al-Khaja added that the current indicators of the demand for retail outlets reveal the extent of the sector’s recovery from the repercussions of the pandemic, explaining that the recovery in sales is supported by the increased demand for the purchase of holiday supplies, in addition to the intensification of competition between outlets to expand by offering discount offers in various proportions and forms. To attract the largest possible number of consumers and increase sales shares.

For his part, the official spokesman for the “Aswaaq” group centers of the Governmental Investment Corporation of Dubai, Abdul Hamid Al Khashabi, said that although the “Corona” pandemic had many negative effects at its beginning in the retail sector, and was reflected in various forms on changing consumer trends and behavior, However, the sector was able to overcome the difficult stages of the pandemic, until it finally reached a remarkable period of activity, which confirms the extent of the rapid recovery achieved by the sector from the repercussions of the pandemic.

He added that the summer holidays supported the increase in demand and the growth of sales in outlets, which revived the retail market at rates close to the pre-pandemic periods, whether in 2019 or 2018.

Al-Khashabi expected that the rates of increase in sales and recovery in the sector would continue, especially with the outlets' administrations gaining more experience to deal with the repercussions of the crisis, and the return of consumer demand growth at noticeable rates in the markets.

He explained that the return of tourism and the influx of visitors to local markets had positive effects in shopping centers, and the easing of restrictions in several countries on travel, the resumption of flights with various international destinations, and the orientation of a large number of citizens and residents to travel, was well reflected on the outlets. With consumers and families buying travel necessities.

In turn, the Director-General of the Ajman Cooperative Markets Association, Sami Muhammad Shaaban, said that the retail markets have witnessed remarkable activity and recovery, since the beginning of this year, especially with the beginning of the holiday season in the summer, which made sales rates close to those in the pre-pandemic years.

And he indicated that the same period last year witnessed a limited movement affected by the repercussions of the pandemic and periods of closure, considering that the return of growth and recovery to retail sales in local markets, a positive indication of recovery from the effects of "Corona".

Shaaban added that the largest shares of sales at the beginning of the holiday season are concentrated in food commodities, followed by consumer goods, electronic devices and gifts, with many families residing in the country preparing to spend a period of summer in their countries.

In the same context, the Director of the Marketing and Happiness Department at the Union Coop, Dr. Suhail Al Bastaki, confirmed that the retail sector sales have finally returned to their normal conditions similar to the years before the pandemic, with the support of several factors, most notably the return of tourism activity, and the increase in confidence. Among the consumers, the demand for shopping centers, in light of the tightening of precautionary safety measures, and the taking of most of the country’s residents with the anti-Coronavirus vaccine, in addition to the beginning of the summer vacation season, which increased the demand for holiday supplies.

Al Bastaki stated that the holiday season reflected positively on sales, whether with the fact that some consumers prefer to spend vacation in the country, or travel outside the country, explaining that families who will spend the summer vacation in the country, their consumer demand will increase with school vacations and spending longer times at home, while shopping. Consumers planning a vacation abroad Travel essentials and gifts.

And he indicated that the most important differences for the holiday season in the retail markets in the country now and the pre-pandemic years, is the remarkable expansion of discount offers between sales outlets, with the intensification of competition imposed by the repercussions of the pandemic on the sector, which made competition rise through large discounts and the advantages of value offers. Added, to raise sales shares and attract consumers.

In addition, the CEO of Mubarak and Brothers Investments Company, Muhammad Al-Hajj, said that there is an increase of up to 60% in visitors to the Deerfield Mall, during the current period, compared to the same period last year, and there is an increase in sales, but it varies. From one store to another according to the activity.

Al-Hajj explained that the increase in visitors and sales is driven by the preparation for summer vacations, in particular the willingness to travel abroad, in addition to discount campaigns such as "Shop and Win", which include competitions that offer instant prizes and raffles on cars, noting that most shops participate in these events. .

Al-Hajj pointed out that the reassurance of the safe health situation in the country, after the intensification of vaccination operations, and the strict application of precautionary measures, contributed to the increase in visitors to shopping centers.

For his part, the director of the Line Real Estate Investments Company, which is responsible for managing a number of major malls in the country, Wajeb Khoury, said that there is a significant increase in sales of shops, with a significant increase in the number of visitors to shopping centers, during the current period compared to the same period last year. last year, but he agreed with Al-Hajj that the increase in sales varies from one store to another according to the activity.

Khoury explained that this increase was supported by the preparations of consumers to travel during the summer vacation period, in addition to the fact that a large number of stores made discounts on various goods at rates exceeding 70% to meet the requirements of consumers during the holiday season, whether they are about to travel or who prefer to stay on vacation within the country.

He stressed that the return of the full capacity of commercial centers, as was the situation before the Corona pandemic, contributes significantly to returning to the same levels of shopping, during the period preceding the pandemic, stressing that the priority is to preserve the health and safety of consumers.

The official in one of the major commercial centers in Abu Dhabi, (AS), said that the market has witnessed a significant improvement, since the beginning of this year, whether in the past months or this month, compared to the same period last year, driven by the acceleration of vaccination operations and the improvement of the general economic situation after Gradual recovery from the repercussions of "Corona".

He pointed out that it is expected that, if the current high rates continue, shopping and sales during 2021 will reach the rates of 2019 or close to it.

In a related context, the Deputy Director of the Abu Dhabi Cooperative Society for Operations, Abdullah Eid, said that there is an increase in sales during the current period, ranging between 25 and 30%, compared to its rates during the same period last year.

Eid explained that the demand for shopping during the current period is related to the preparations of many families to travel to spend summer vacations abroad, in particular the travel of resident Arab families to their countries, as well as the start of school summer vacations, and the preference of some residents to stay during the vacation period in the country, given the precautionary measures. And the infection rates are constantly declining, which makes it safer, especially in light of the closure of some major Asian countries due to the increase in “Corona” injuries in them.

He indicated that sales are generally focused on clothes, foodstuffs, electronics, travel bags, gifts and perfumes.

In turn, the sales official in one of the state's outlets, Idris Ibrahim, said that there is an increase in sales that exceeds 25% during the current period, compared to the same period last year as well as in the past months, supported by the readiness for families to travel to spend summer vacations abroad, and the start of school vacations, And some residents prefer to stay in the UAE while consumers are reassured about the health situation in the country, especially after the acceleration of vaccinations.

He explained that sales are generally focused on clothes, shoes and bags, especially travel bags, phones, gifts, accessories, jewelry and cosmetics, and there is a demand for food, clothing, furniture and decoration, televisions and electronics in general, household appliances, games and others for residents within the country.

The Director-General of The Galleria Mall on Al Maryah Island in Abu Dhabi, David Robinson, said that the center received more than 2.7 million visitors, during last May, to record the highest monthly turnout witnessed by the center to date, despite the repercussions of the pandemic and the restrictions imposed on operational capacity. Noting that the center continued to apply strict sterilization procedures to keep pace with this increase in the number of visitors, and also strengthened security and safety teams to ensure the application of social distancing measures and safe distances.

Robinson added that the high turnout is due to various events, including the "Big Sale" event, the launch of the restaurant promotional campaign, in addition to the opening of a number of new stores.

He expects this positive momentum to continue throughout the year, in conjunction with hosting more shopping options later on.

• Expectations that shopping and sales rates will reach pre-pandemic levels during 2021.