"XX Bank, up to 100 million unsecured" clever text, how not to be deceived?

Friendly economy time. Reporter Kim Hye-min is here. The economy has become very difficult these days because of the corona virus. There are also a lot of people who are having a hard time. That's why, there is talk of an increase in the number of illegal loan advertisements. 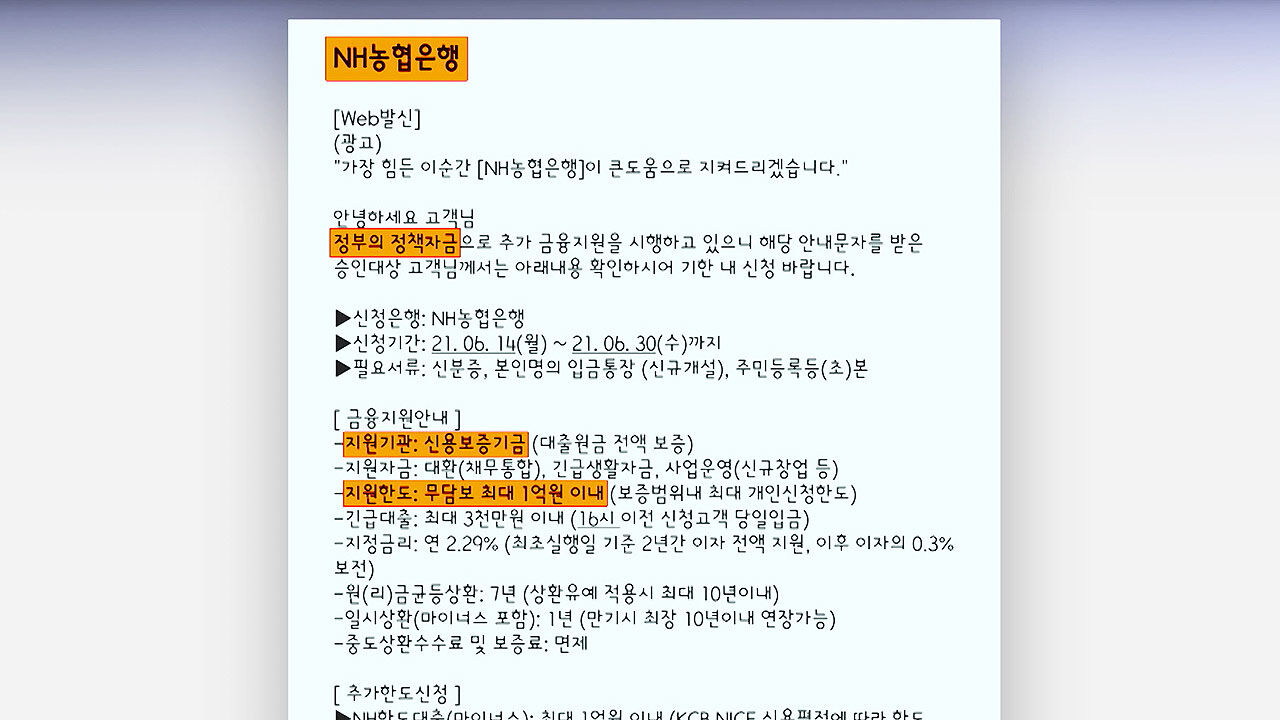 friendly economic time. Reporter Kim Hye-min is here. The economy has become very difficult these days because of the corona virus. There are also a lot of people who are having a hard time. That's why, there is talk of an increase in the number of illegal loan advertisements.

In the past, there were many cases where flyers were placed on the walls of buildings or subways to induce people in need of money to contact them, but these days, due to Corona 19, the number of untact advertisements is also increasing.

In particular, recently, there are many advertisements that trick people into making phone calls as if they were giving loan advice at a large bank, but this is so clever that many people are deceived.

There are a lot of people who are deceived, so if you tell us what kind of advertisements these are, I think we can prevent the damage.

I've been getting a lot of text messages like this lately, so I'll show you the details of these text messages.

First, they are impersonating a large financial institution. "We are implementing additional financial support with government policy funds", "Customers who receive this notice should apply within the deadline"and instills confidence in consumers.

At the same time, there was a very plausible mention that the Korea Credit Guarantee Fund provides support, and the limit of support is up to 100 million won without collateral. In fact, I was almost deceived.

However, calling here can lead to criminal activities such as voice phishing. And these illegal loan advertisements ask victims to contact them by nailing the execution date of the loan, because they change their phone number after two or three weeks.

It takes some time for the financial authorities to detect and take action, but in the meantime, they use a method to avoid detection by changing the number.

I think I've gotten texts like that before. So, I think I heard a lot of plausibility while watching it, but then, what should I do to avoid this kind of damage?

First, the easiest way to tell whether or not it is an illegal loan advertisement is to check the 'contact number' that the text message came from.

If you would like to get a loan, it is recommended that you call the bank's representative number or inquire directly at the window of a financial company.

You should also be especially wary of advertisements with nonsensical phrases, words like 'everyone can borrow' or 'possible bad credit' can be tempting.

However, there are very few loans that can actually do this. You should also be suspicious when mention of 'supply', 'number of days', and 'low interest exchange' is mentioned.

All other loan-related payments, except for lien establishment fees and credit check fees, must be treated as interest, even if they have slightly different names.

The current annual interest rate must not exceed 24%, and from the 7th of the next month onwards, this will be lowered to 20% per annum. If you have overpaid interest, this is all invalid and you can claim a refund.

right. If you organize a little, simply do not call when you see a text message, and if you really need money, go directly to the bank or use the bank representative number. Another worrying thing is that there are a lot of people who do business like this, saying that they will give illegal loans to teenagers.

This is often referred to as 'representative admission' or abbreviated 'dealip'. When teenagers want to buy idol goods or game items, they aim for something that requires a small amount of money, so they are mainly advertising through SNS, which is used a lot by teenagers.

As advertised now, they lend a small amount of tens of thousands to hundreds of thousands of won within a week, and they receive interest in the name of hard work and late payment of several thousand won per hour if they repay late.

It makes you think that this is not a huge amount, but if you look at the interest rate, it is a high interest rate of 20-50%, which is 1,000% in one year. They threaten me if I can't pay the money back. Secondary damage such as personal information exposure may also occur.

Teenagers should not do this kind of microloan first, and if you are harmed after using it, be sure to ask your parents or teachers for help.