In Egypt, twelve death sentences were pronounced Monday, June 14 against members of the Muslim Brotherhood, including two leaders of the Islamist brotherhood, were confirmed by an Egyptian court, a in… 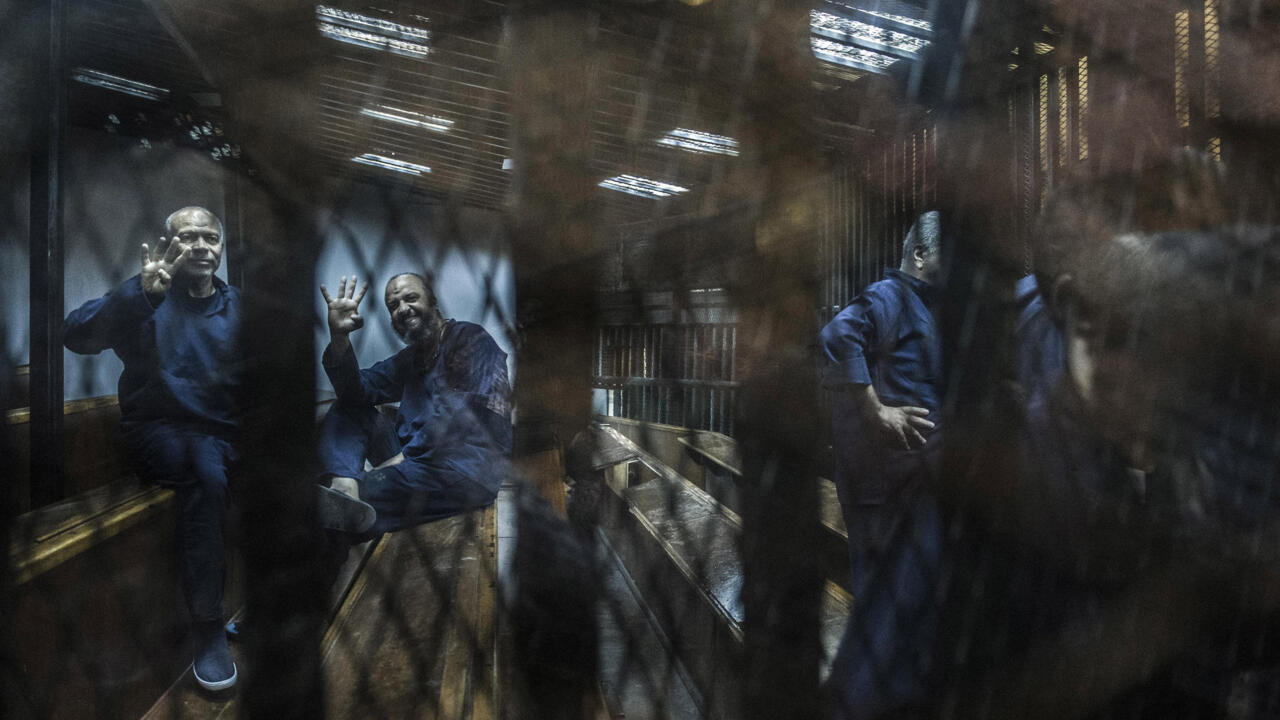 The Egyptian Muslim Brotherhood figure Mohamed el-Beltagi flashes the four-fingered symbol of the Rabaa demonstration behind bars, during his trial for insulting justice in 2015. Khaled DESOUKI AFP

In Egypt, twelve death sentences were handed down on Monday (June 14th) against members of the Muslim Brotherhood, including two leaders of the Islamist brotherhood, were confirmed by an Egyptian court, a judicial official told AFP on Monday.

The Court of Cassation also commuted the death sentences of 31 other members of the brotherhood - who participated in an Islamist sit-in in Cairo in 2013 where hundreds of people were killed by the security forces - to prison terms in perpetuity, specified this official.

Those sentenced to death were accused of "

arming criminal gangs which attacked residents, resisting the police and possessing firearms and ammunition as well as bomb-making equipment

", according to the judgment of the Court.

occupation and destruction of public property

These court decisions cannot be appealed, said the judicial officer.

These ruthless sentences, which were handed down in 2018 after a grossly unfair mass trial, are a stain on the reputation of Egypt's highest appellate court and cast a shadow over the country's judicial system

," denounced in a statement Monday evening, Philip Luther, director of research and advocacy for Amnesty International in the Middle East.

The Muslim Brotherhood, now considered a “

, was taken off the political scene in 2013, after the brief one-year term of one of theirs, Mohamed Morsi. The first democratically elected president after the popular revolt of 2011, Morsi was dismissed by the army, then led by Marshal Abdel Fattah al-Sisi - who has since become president -, thanks to mass demonstrations.

The case, which dates back to 2013 and is known locally as the "

case of the dispersal of the Rabaa sit-in

", initially had more than 600 defendants.

Rabaa refers to a square in eastern Cairo where security forces violently attacked and killed hundreds of people in a single day during a massive Islamist sit-in calling for Morsi's return.

In 2018, an Egyptian court sentenced 75 participants in this sit-in to death and the others to various prison terms.

Morsi's son, Osama, had been sentenced to 10 years in prison.

The dispersal of this gathering, organized a few weeks after the dismissal of Mohamed Morsi, was qualified by the NGO Human Rights Watch as "

the most important mass killing in modern Egyptian history

", for which no representative of the authorities was worried by the courts.

The killing of Rabaa, symbol of a murderous repression in Egypt

The authorities had, at the time, indicated that members of the Muslim Brotherhood were armed and that the dispersal operation was counterterrorism.

The Brotherhood of the Muslim Brotherhood, founded in 1928, advocates placing Islam at the center of public life.

It has long been the main opposition movement in Egypt despite decades of repression.

It has also inspired other political movements in the Muslim world.

Former President Morsi, sentenced to death for his role during the anti-Mubarak revolt, died in 2019 in the middle of the court where he was being tried.

Khalil al-Anani, professor of political science at the Doha Institute and author of a book on the Muslim Brotherhood, tweeted that Monday's verdict was part of

against its political opponents