Invest 1.8 million in a store and pay back in one and a half years: Is the money for milk tea so profitable?

Sino-Singapore Jingwei Client, June 14 (Yan Shuxin) Recently, "new style tea" has once again become the focus of market attention. First, China Post sold milk tea across borders, attracting many consumers to line up to buy; then Naixue’s tea finally passed the listing hearing and became the quasi-"new-style tea drink first" and broke the previous rumors of "bleeding on the market". In 2020, the 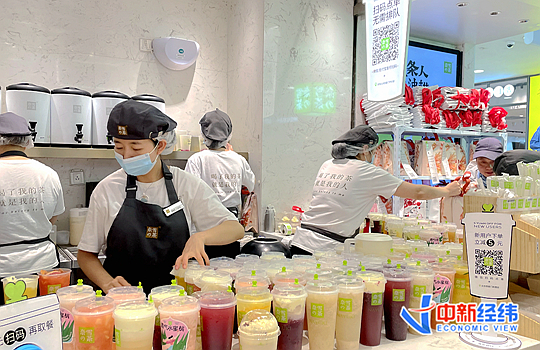 First, China Post sold milk tea across borders, attracting many consumers to line up to buy; then Naixue’s tea finally passed the listing hearing and became the quasi-"new-style tea drink first" and broke the previous rumors of "bleeding on the market". In 2020, the adjusted net profit was 16.643 million yuan, turning losses into profits.

Post enters the office, Nayuki is listed, is the money for milk tea really good?

Recently, a milk tea shop called "Youxian Tea" in the China Post Pharmacy in Fuzhou City, Fujian Province became popular, attracting many consumers to check in and line up to buy.

It is reasonable for the postal service to enter the new-style tea.

In recent years, the popularity of new tea drinks has attracted a lot of capital to join.

Taking the two leading tea brands of Hey Tea and Naixue as an example, Tianyan Check data shows that since 2016, Hey Tea has completed three rounds of financing. Investors include IDG Capital, Today Investment, Hillhouse Capital, etc., round A The total amount of round B financing exceeds 500 million yuan. Although the amount of round C financing has not been announced, there is news that the valuation of Xicha after this round of financing may exceed 16 billion yuan.

Naixue’s Cha has completed five rounds of financing, with investors including Tiantu Investment and Honghui Capital.

The latest round of financing was at the beginning of this year. At that time, according to media reports, Naxue's Tea had completed a Series C financing of more than 100 million US dollars, led by the Pacific Alliance Investment Group (PAG).

After this round of financing, Naixue's tea valuation is close to 2 billion U.S. dollars (about 13 billion yuan).

According to the data from Tianyan Check, since 2021, nearly ten financing incidents have occurred in the new tea-drinking track, with a total of over 800 million yuan.

With so much capital pouring into this track, can new tea drinks make money?

Perhaps we can find the answer in the prospectus of Nayuki's tea.

According to Nayuki's tea prospectus, it takes two to three months to establish a standard tea shop for Nayuki, depending on the size and location of each tea shop.

As of March 31, 2021, the average investment cost for opening each standard tea shop and Naixue PRO tea shop is approximately RMB 1.8 million and RMB 1 million.

The tea and tea shops of Nayuki that opened in 2018 and 2019 have achieved a payback period of 15.5 months for tea shops as a whole.

The first break-even period of Naxue’s tea shop during the track record period was approximately less than 4 months.

In other words, to open a tea shop in Nayuki, invest 1.8 million yuan, break even within 4 months, and pay back 15.5 months.

According to media reports, the investment payback period for KFC's new store is about 2 years, and Pizza Hut is 3-4 years.

It's not difficult to understand why Nayuki's tea has been opening stores like crazy.

According to the prospectus, in November 2015, Naixue's Tea opened its first tea shop in Shenzhen.

Data source for the growth of the number of tea shops in Naixue: Drawing by Yan Shuxin in the new latitude and longitude of Naixue's tea prospectus

In an interview with the media, Peng Xin, the founder of Naixue’s tea, said that the listing in Hong Kong was not due to lack of money. “We actually didn’t have much financing in the past. Before 2020, there was only one investor called Tiantu. We went from one store to 500 nationwide. Many stores, to 17,000 partners, where does the money come from? The stores make their own money."

"The reason Nayuki's tea made a loss before was mainly due to the company's greater cost pressure in terms of expansion and marketing, so the problem of profitability in the early stage appeared. However, most tea brands can still guarantee profitability. From a point of view, the profit level of the industry is relatively high." Jiang Han, a senior researcher at Pangu Think Tank, said to the Sino-Singapore Jingwei Client.

Shen Wan Hongyuan once mentioned in a research report that the investment payback period of the tea industry is generally about 1-1.5 years, and there is still room for optimization of corporate profits.

As for subsequent improvement, Shenwan Hongyuan believes that large-scale stores still assume the role of brand marketing. Assuming that small-scale stores will be the main stores in the future, it is expected that the same-store profit margin will also increase structurally; at the same time, the scale effect brought by scale expansion will be further Reduce costs and headquarter expense ratios, thereby increasing profit margins.

The money for new-style tea is not easy to make

An increasingly serious problem facing these more than 300,000 stores is product homogeneity.

As long as a product becomes popular among consumers, other brands will rush to launch similar products.

Nayuki's tea mentioned in the prospectus that it launches about one new drink a week on average, and the company has launched 60 seasonal products since 2018.

At the same time, Nai Xue's Tea said that to further build brand awareness among the Chinese public to attract new customers and retain existing customers, it also requires continuous and substantial investment in sales and marketing.

However, not all market participants have this strength.

In addition to the issue of product homogeneity, how to maintain the food safety red line is also a major challenge for the industry.

Some time ago, a store under Michelle Ice City was exposed to tampering with the validity period of ingredients and illegal use of overnight milk milk, which caused heated discussions.

“Michelle Ice City’s low pricing has further compressed its profit margins, resulting in loopholes in its management of employees and stores.”

The Sino-Singapore Jingwei Client noticed that after the incident was exposed, a Michelle Ice City franchisee once said, “As long as you make a profit, you will not do this kind of thing. The unit price of Michelle is too low, but now the rent is expensive. The labor is expensive and the take-out charge rate is high, so I can only save a little bit from here."

Zhu Danpeng said that food safety issues are a major hidden danger for new-style tea shops in China, among which franchise-based brands are more prone to problems.

"New-style tea drinks are a good track, but the industry has actually entered a state of red sea competition. Under such a situation, brands can only rely on quality to determine the victory. Who can better attract consumers? , Allowing consumers to buy repeatedly, who can continuously introduce new ones, and give consumers more fresh attempts, these are the core issues that currently plague the development of new-style tea brands." Jiang Han believes.

According to the Insight Consulting report, in terms of retail consumption value, the total market size of China's ready-made tea drinks in 2020 is about 113.6 billion yuan, and is expected to reach 340 billion yuan by 2025, with a compound annual growth rate of 24.5%.

"New-style tea has inherited and developed China’s tea-drinking culture, conforms to the tastes of Chinese consumers, and has more closely grasped the needs of generation Z consumers. New-style tea drinks accounted for 55% of consumers born in the 1990s, which is much higher than the traditional ones. Original leaf tea and teabags.” said China Securities.

This part of the consumer group has higher brand loyalty, pays more attention to health and nutrition and other elements, and is less sensitive to product prices.

On the other hand, the epidemic and digitalization have accelerated the proportion of takeaways in tea consumption. With the help of takeaway services, brands have reduced their dependence on business premises, saving rental costs while maintaining high operating efficiency.

Shenwan Hongyuan Research Report pointed out that China's ready-made tea industry is in a period of accelerating growth and cashing dividends.

The agency believes that the tea industry is similar to the catering industry, and the diversity of consumer taste preferences and the high frequency of consumption determine its extremely long tail characteristics.

"Hicha, Naixue's tea and Haidilao have a high degree of overlap in store location. According to the analogy of Haidilao's store space, we believe that the number of stores for a single mid-to-high-end tea brand across the country can potentially expand to 3,000 in the future. the above."

China Securities Investment also mentioned that the domestic tea industry has great potential for development, and it is still in a period of high investment and differentiated competition in recent years.

"As more and more players join, the new tea drink market has gradually entered a node of rapid development and rapid growth. Under this node, the entire industry still has room and possibility to continue to expand. In other words, the competition in the future is more about brand effect and scale barriers, and this is also the embodiment of the core competitiveness of enterprises." Zhu Danpeng said.