Chinanews.com client, Beijing, June 12 (Zuo Yuqing) In the sweltering summer, who doesn't want to be able to blow on the air conditioner comfortably at home, then take out a popsicle from the refrigerator, eat and watch TV beautifully Chasing drama?   The summer that has come is the peak season for many home appliances. In the past, merchants would cut prices according to holidays. However, tod 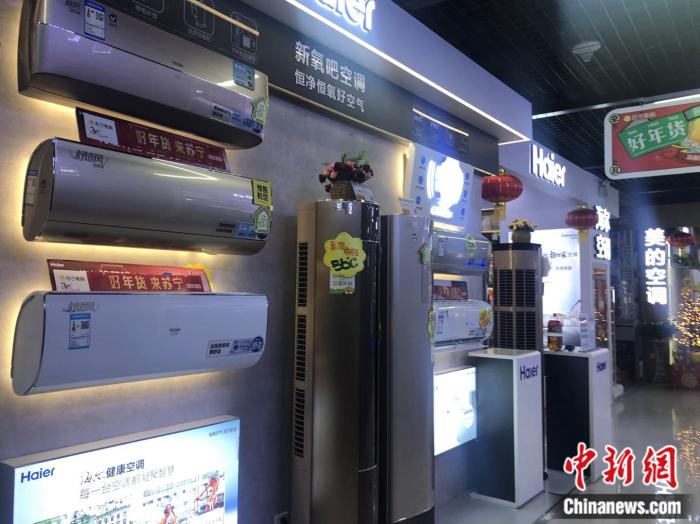 Chinanews.com client, Beijing, June 12 (Zuo Yuqing) In the sweltering summer, who doesn't want to be able to blow on the air conditioner comfortably at home, then take out a popsicle from the refrigerator, eat and watch TV beautifully Chasing drama?

The summer that has come is the peak season for many home appliances. In the past, merchants would cut prices according to holidays. However, today's home appliance market is "rising."

According to the data monitored by Aoweiyun, from May 31 to June 6, the average prices of large appliances such as refrigerators, washing machines, air conditioners, and color TVs showed a year-on-year upward trend.

In fact, in the first quarter, there has been a wave of price increases for home appliances.

For example, the price increase notice issued by Midea in February showed that the overall price system of refrigerator products has been increased by 10%-15%.

Why the price increase?

Troubled by the "price increase" of upstream raw materials, there is also the "core shortage" of the automotive industry, such as automotive steel plates, tires, plastic parts...automotive parts companies and downstream vehicle companies are all facing the pressure of rising costs.

What many people may not have expected is that the prices of milk tea and coffee on the street are all rising, and the shopkeepers directly call that the cost of fruits and milk tea cups are rising; many people find that the cost of decoration has also increased after buying a new house... Behind this, it is all related to the rapid increase in the prices of upstream raw materials, especially bulk commodities.

Raw material prices have risen one after another. What happened?

Affected by the impact of the epidemic and the economic recovery, global commodity prices have shown an upward trend and hit a record high in May 2021.

Take steel as an example.

“Most of the imported iron ore powder comes from Brazil and Australia. Affected by the epidemic, the price of iron ore powder has fluctuated slightly since April last year, and it has risen by the end of the year.” Ms. Tong, who works in a steel group, told Chinanews.com Said that the company's raw materials and sales channels for steel production are dependent on foreign markets, and the prices of iron ore powder and steel are currently rising.

Data map: The iron ore is seamlessly transported to the railway at Chenglingji Port, Yueyang.

"In addition to the factors of rising raw material prices, the strong market demand for steel has also led to price increases." Ms. Tong said that the United States' implementation of quantitative easing policies has promoted economic recovery while also boosting demand in overseas markets.

"Global economic expectations are improving, and the short-term speculation in the financial market on steel products has also promoted price increases."

Prior to this, on May 23, five departments including the National Development and Reform Commission, the Ministry of Industry and Information Technology, the State-owned Assets Supervision and Administration Commission, the State Administration of Market Supervision, and the China Securities Regulatory Commission jointly interviewed key companies with strong market influence in the iron ore, steel, copper, and aluminum industries. Continue to increase law enforcement inspections, investigate abnormal transactions and malicious speculation, and resolutely investigate and punish violations of the law, such as reaching agreements to implement monopoly, spreading false information, driving up prices, and hoarding.

Director of a mechanical processing plant: "The profit margin is almost squeezed out"

“The company’s cold-rolled sheet export price in January was close to 5,000 yuan/ton, and now the price has risen to 8,800 yuan/ton.” Ms. Tong believes that due to the market’s influence, the rising trend of steel prices is difficult to alleviate in the short term, and it will also affect downstream industries. Have a big impact.

"Car manufacturing, electrical products, precision instruments, etc. will all use cold-rolled plates. Hot plates are also widely used, and the rise in steel prices will definitely have an impact on the downstream."

The increase in commodity prices has a greater negative impact on small and medium-sized enterprises in downstream industries.

Mr. Li, the director of a small and medium-sized machinery processing plant, told Chinanews.com that the raw materials produced and processed in his factory are mainly domestically produced steel, and since the end of 2020, the price of steel has been rising.

"The price of steel rose to its highest peak in April 2021. Although there has been a slight decline recently, it is still rising compared to last year."

According to Mr. Li's calculation, the average price of steel from January to May of 2021 is 5,020 yuan/ton, and the price has increased by 540 yuan/ton year-on-year, or 12.05 percent. The increase in steel prices has reduced the factory’s profit by 70,000 yuan.

"We mainly produce drill bits and sell them to domestic steel companies. Now small processing companies like ours have basically no profit margins." Mr. Li said that if steel prices remain high for a long time, he will eventually have to choose to increase prices.

Will the rise in commodity prices trigger an overall rise in prices?

Due to the successive record highs of commodity prices, inflation has recently picked up.

In May, the producer price index (PPI) of China's industrial producers rose by 9.0% year-on-year, setting a new high in the past 13 years.

In May, the executive meeting of the State Council "named" bulk commodities twice, demanding to protect the supply of bulk commodities, curb unreasonable price increases, and strive to prevent transmission to consumer prices.

On June 10th, the Governor of the People’s Bank of China, Yi Gang, stated at the 13th Lujiazui Forum that the prices of global crude oil and other commodities have risen rapidly recently. The short-term rise in global inflation has become a fact, but whether inflation can be sustained in the long-term is a fact. , There are huge differences.

"my country persisted in implementing normal monetary policy during the epidemic last year, and domestic aggregate demand was relatively stable, which is conducive to maintaining overall price stability. Since the beginning of this year, my country's PPI has increased relatively high, which is to some extent related to the low base formed by the negative PPI last year." Yi Gang said. Judging from various factors, the trend of my country’s CPI this year is low and then high. The average increase in CPI for the whole year is expected to be below 2%.

Yi Gang also reminded that “the external epidemic situation, economic recovery, macroeconomic situation and macroeconomic policies are all uncertain, and the pressures of inflation and deflation from all quarters must not be taken lightly.”

On May 26, the 400,000-ton-class ore ship "Yuanfuhai" from Brazil and carrying Vale iron ore arrived at Luoyu Port No. 9 berth for the first time and operated smoothly.

Photo by He Weiliang

On June 5, the China Federation of Logistics and Purchasing released data showing that in May, the China Commodity Index (CBMI) dropped significantly after rising for three consecutive months and fell to a low in the past five months.

"On the whole, the fundamentals of supply and demand in the domestic bulk commodity market are still good, supply and demand are still in equilibrium, and commodity inventories continue to decline." The China Federation of Logistics and Purchasing said that as the State Council meetings and ministries and commissions continue to speak out, the prices of bulk commodities (black Metal products) have basically returned to the price level before April 21 in a short period of time.

What do you think of the impact of rising commodity prices on PPI and CPI? (Finish)