[NHK] Before the occupational inoculation of the new coronavirus vaccine begins on the 21st, private companies are preparing to rehearse for the inoculation ... 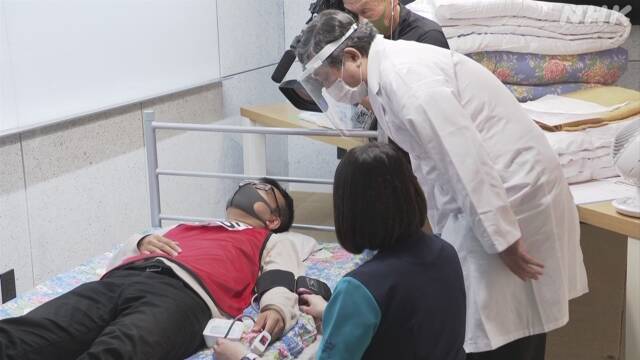 Before the occupational inoculation of the new coronavirus vaccine begins on the 21st, private companies are making full-scale preparations such as rehearsing for the inoculation.

Of these, the SoftBank Group plans to inoculate about 100,000 people involved, including employees of telecommunications subsidiaries and their families, staff of mobile phone shops and call centers of contractors, from the 21st, and will be the venue in Tokyo on the 11th. We rehearsed at the facilities of a group company in Minato Ward.

At the rehearsal, we confirmed the flow from the interview to the vaccination of the employee.

In addition, training was conducted assuming a case of illness due to a side reaction after inoculation, and medical staff confirmed the on-site response, such as measuring blood pressure and pulse in a separate room.

There is also a freezer at the venue to store the vaccine at -20 degrees Celsius, and the company plans to give priority to the staff of mobile phone shops and call centers who have difficulty teleworking, following the elderly.

The company wants to increase the number of vaccination venues to more than 10 locations nationwide, and Fumihiro Aono, managing director of vaccination at Softbank, a telecommunications subsidiary, said, "We will inoculate as many people as possible in the workplace, and in the future, to the general public. I would like to consider expanding the scope. "