This is the way for the country of Abdel Fattah al-Sisi to reaffirm on the international scene its essential role in the Middle East. Cairo has pledged to release $ 500 million for Gaza. A… 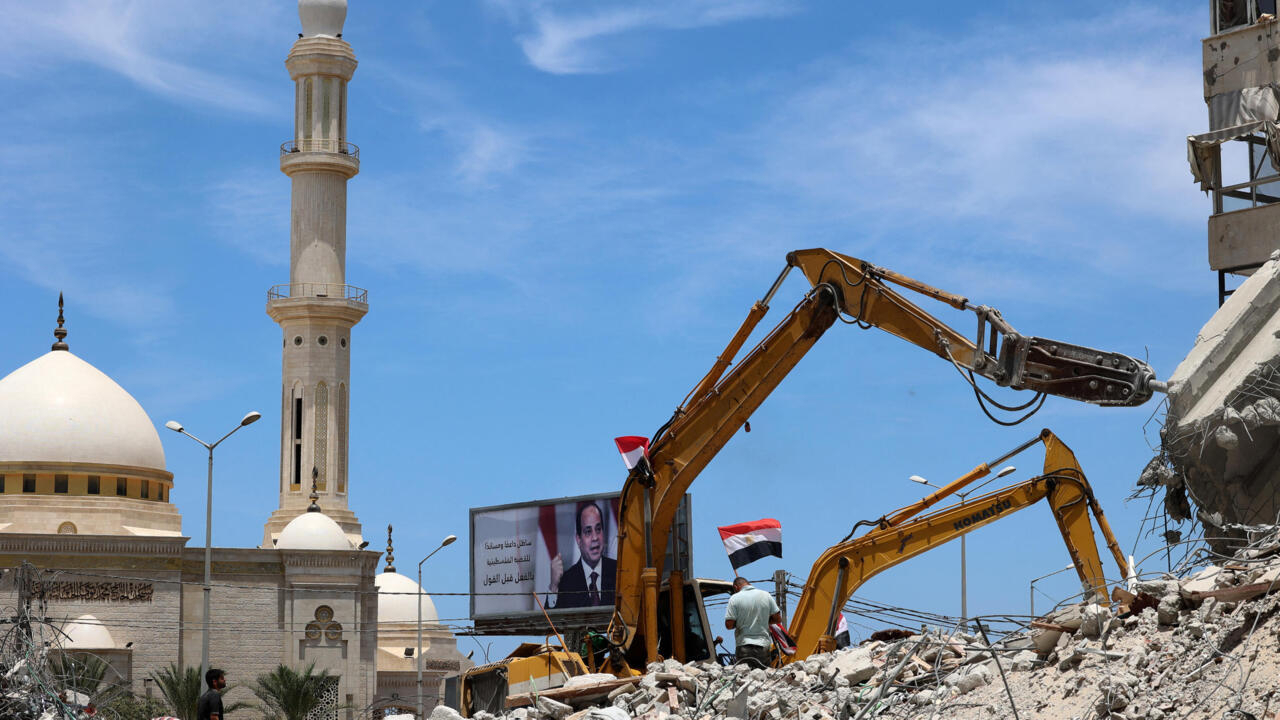 A bulldozer sent by Egypt and bearing the image of its president Abdel Fattah al-Sisi works in the rubble of a building destroyed by Israeli airstrikes in Gaza City on June 8, 2021. AFP - MOHAMMED ABED

This is the way for the country of Abdel Fattah al-Sisi to reaffirm on the international scene its essential role in the Middle East.

Cairo has pledged to release $ 500 million for Gaza.

A colossal sum for Egypt.

Egyptian televisions like to broadcast portraits of President Abdel Fattah al-Sisi which flourished in Gaza, reports our correspondent in Cairo,

. By managing to establish a truce between Hamas and Israel on May 21 after eleven days of a new war between the Palestinian enclave and Israel, the Egyptian president has succeeded in establishing himself as a key regional player with the West, and especially of his American counterpart Joe Biden, who criticized him until recently on the human rights situation in the country.

This Egyptian diplomatic activism to settle this conflict came to crown the long-term diplomatic efforts of Cairo to regain its regional role, after years of diplomatic marginalization linked to the political instability that followed the popular uprising of 2011.

To consolidate this role, which has been regained beyond the truce, Egypt will release $ 500 million to rebuild the Palestinian enclave, where some two million people have been living crammed under Israeli blockade for nearly fifteen years.

In addition to this Egyptian plan, there are several hundreds of millions of dollars from the Gulf countries.

The Egyptian companies will be in charge of the reconstruction of Gaza.

This will make it possible to overcome Israeli objections to a reconstruction managed by Hamas.

The movement has muted its Islamist streak and stopped its support for the Islamic State Group in Egyptian Sinai.

In 2017, the Palestinian movement assured that it was distancing itself from the brotherhood of the Muslim Brotherhood, considered "

To read also: Egypt at the heart of the negotiations for a lasting truce between Israel and Hamas

Companies owned by the army, the main beneficiaries

With this plan, Egypt finally returns to history, since it was she who managed Gaza from 1948 to 1967. This massive investment will also be beneficial for the Egyptian economy, especially the companies owned by the army, strongly represented. in the construction sector, one of the main engines of growth.

clear away the rubble

" and prepare for reconstruction.

She also announced a "

forum on the reconstruction of Gaza

" which is taking place in Cairo from Thursday June 10 until Sunday June 13.

It brings together political leaders and private entrepreneurs from the region, under the aegis of Egyptian Prime Minister Mostafa Madbouli.

Despite the coronavirus pandemic, Egyptian GDP growth reached 3.6% in 2019-2020, according to official figures.

But nearly a third (29.7%) of its 102 million inhabitants live below the poverty line.

Cease-fire between Israel and Hamas: "Diplomacy does not stall that much"