Chinanews client, Beijing, June 5 (Reporter Wu Tao) "The mobile phone access information does not match the information filed by the Ministry of Industry and Information Technology" "It claims that only one of the three cameras can be used." According to netizens, such mobile phones are used by the famous Kuaishou anchor "Luzao" Pingrong’s live broadcast room was sold to consumers. what's the pr 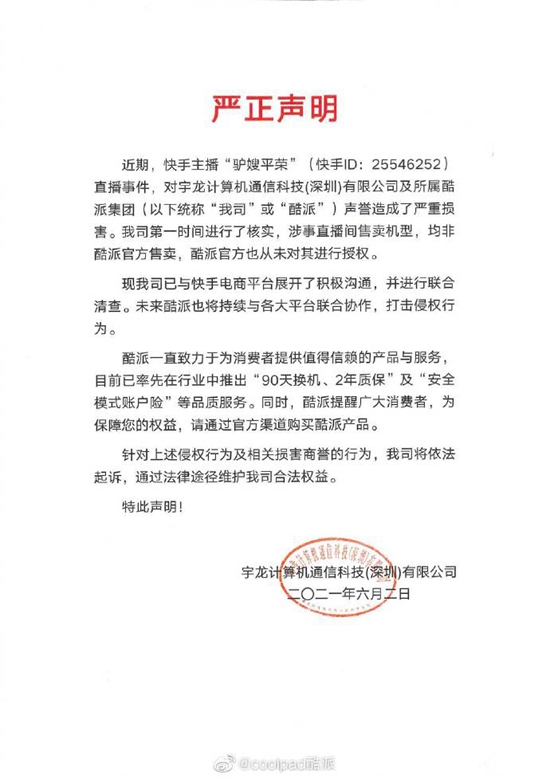 Chinanews client, Beijing, June 5 (Reporter Wu Tao) "The mobile phone access information does not match the information filed by the Ministry of Industry and Information Technology" "It claims that only one of the three cameras can be used." According to netizens, such mobile phones are used by the famous Kuaishou anchor "Luzao" Pingrong’s live broadcast room was sold to consumers.

Who is responsible for fake mobile phones?

ZTE and Coolpad have cleared their relationship: not their own mobile phones

The sale of fake mobile phones by "Like Sao Pingrong" caused public outrage.

Subsequently, Kuaishou e-commerce company announced that a batch of "counterfeit" mobile phones were removed from the shelves, including ZTE and Coolpad.

The mobile phone brands that have been removed also include Duowei, Rouyu, Tianyu, and Shuobao.

Coolpad will sue according to law to protect the legitimate rights and interests of the company.

Shanghai ZTE Yilian also stated that "Guobao" is the product brand of Shanghai Yilian, but Shanghai Yilian has never produced and sold "Guobao F6 Pro" products, and has not authorized any company to produce the "Guobao". Brand model products.

"Guobao F6 Pro" is a counterfeit and shoddy product.

The product involved has nothing to do with ZTE's mobile phone.

According to netizens, "Liu Sao Pingrong" has broadcast live mobile phones for many times, and the mobile phones sold by it appear "the network access information does not match the information recorded by the Ministry of Industry and Information Technology", "the nominal mobile phone has three cameras but only one camera is available", and the claimed 256GB memory is actually only About 64GB" one or more of them.

At present, the account is suspected of being banned, and its latest work time is shown in October 2020, and no video related to the sale of fake mobile phones has been seen.

For Duowei, Kuaishou e-commerce will permanently cancel all Duowei products, and the companies involved will never cooperate.

In the face of consumers, Kuaishou e-commerce said that on the basis of previous refunds and non-returns, all consumers who bought "Duowei 12Pro" phones in the live broadcast room will be compensated 9 times.

However, the anchor "Liu Sao Ping Rong" has not yet apologized.

However, the "fake 1 pay 9" scheme implemented by the Kuaishou platform triggered a chain reaction.

In this regard, Kuaishou has not yet responded.

However, there are media reports that Jiangxi Fuzhou Consumers Association has stepped in.

The statement issued by ZTE Mobile on June 2 also mentioned that, according to consumers’ reports, fake mobile phones are only refunded without compensation: some consumers posted complaints in Kuaishou’s video showing that they bought Shanghai ZTE in the live broadcast of "Like Sister Ping Rong". "Guobao F6 Pro" mobile phone has the wrong board, only the refund will not be compensated.

Who should bear the responsibility?

Some netizens believe that they are all sold by "Like Sao Pingrong", and some can not be "fake 1 pay 9", and some refunds.

According to relevant laws and regulations, at least one vacation should pay three.

The "Consumer Rights Protection Law" stipulates that if a business operator commits a fraudulent act in providing goods or services, he shall increase the compensation for the losses suffered by the consumer in accordance with the requirements of the consumer. Three times; if the amount of compensation is less than 500 yuan, it is 500 yuan.

In fact, there have been similar cases before.

In December 2020, the well-known anchor Luo Yonghao showed fake woolen sweaters on the live broadcast. In the end, he "fake 1 loses 3" to consumers.

The "Administrative Measures for Online Live Marketing (Trial)", which came into effect on May 25th, stipulates that live broadcast room operators and live broadcast marketers shall not engage in online live broadcast marketing activities and shall not market counterfeit or shoddy products, infringe intellectual property rights, or fail to meet the requirements of protecting personal and property safety. Products of.

The above regulations also require that live marketing platforms should strengthen the management of online live marketing information, conduct information release audits and real-time inspections, and should immediately take measures to deal with illegal and harmful information, save relevant records, and report to relevant competent authorities.

The live broadcaster sells fake mobile phones, how do you think it should compensate consumers?