Presidential election in Syria: an election decided in advance

This May 26 is held the Syrian presidential election, the second since the start of the war in 2011. An election whose result is already known: Bashar al-Assad will win the ballot and continue to direct… 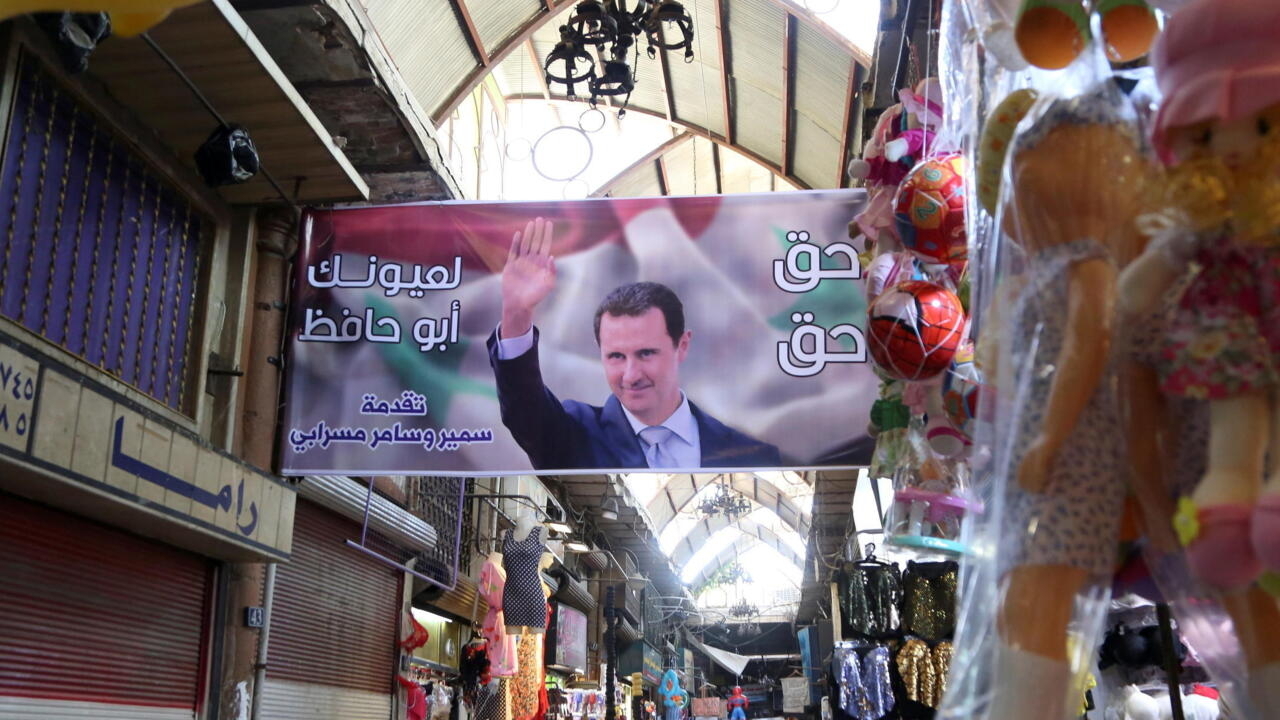 Presidential election in Syria: an election decided in advance

Souk al-Hamidieh, ahead of the May 26 presidential election, in Damascus, Syria, May 22, 2021. REUTERS - YAMAM AL SHAAR

This May 26, the Syrian presidential election takes place, the second since the start of the war in 2011. An election whose result is already known: Bashar al-Assad will win the ballot and continue to lead a country with an iron fist. war for ten years and plunged into an unprecedented economic and social slump.

", specialists do not lack words to describe the presidential election in Syria.

Bashar al-Assad, 55, will therefore be back for a fourth term.

Faced with the one accused by the UN of war crimes and crimes against humanity, two puppet candidates, Abdallah Salloum Abdallah, ex-minister and deputy, and Mahmoud Mareï, a member of the tolerated internal opposition.

Since 1963 in Syria, there has never been a presidential election, so it is not now that it will start

», Laments Salam Kawakibi, political science researcher and director of the Arab Center for Research and Political Studies in Paris.

Indeed, it is by decree twenty-one year ago that Bashar al-Assad succeeded his father Hafez.

He was then 34 years old, in other words six years younger than the age authorized to stand for the presidential election.

The Constitution is then amended so that he can stand as a candidate.

Since then, like his father, he has garnered electoral success (by referendum in 2000 and 2007), and the accusations made by the opposition of rigging and ballot stuffing do not change anything.

The only current "unknown" is the score he will achieve.

If the Arab Spring saw the fall of powerful leaders such as Mubarak in Egypt, Gaddafi in Libya, Ben Ali in Tunisia, Assad still holds Syria. There are several explanations for this. First of all, the extreme violence used by the regime from the start of the peaceful demonstrations (we remember, for example, the terrifying images of

); then, the decisive intervention of Russia in 2015 when Damascus was surrounded by the rebels, the involvement of the Lebanese Hezbollah "

which ethnically and demographically cleansed several border villages with the country of the cedar and which replaced the inhabitants by others who were loyal to him,

Nothing is therefore likely to change in Syria when, according to the UN, 80% of the population today live below the poverty line, that millions of Syrians are refugees abroad or internally displaced, that the country is rebuild and that the coronavirus crisis worsens an already catastrophic situation.

Moscow and Tehran in action

And if the situation seems frozen, it is largely because the Syrian regime is supported militarily and financially by Russia and Iran. “

Syria has become an Iranian-Russian colony

,” says Salam Kawakibi. Moreover, it is the Iranians, the Russians and the militias (confessional like Hezbollah supported by Tehran or others formed and paid by Moscow) who now control the country militarily. “

Tehran will continue to support Damascus, for sure. On the other hand, to fix its relationship with the West, Moscow could ask the regime for some cosmetic, surface reforms.

Bashar al-Assad does not control much more in his country. The Syrian system is a clientelist system and "

", notes the specialist in Syria Fabrice Balanche in the columns of

. According to Salam Kawakibi, Assad controls everything that brings in money, he controls his entourage, his family, "

he distributes the income to his acolytes

". The rest belongs to Moscow and Tehran. "

The regime no longer has a say in a country that is fragmented and occupied by foreign forces, because it no longer manages anything except its prison system and its internal policies in the areas over which it has control. This is all that remains of the sovereignty of the Syrian state since it is neither master of its defense nor of its diplomacy which is modeled on those of its Russian and Iranian protectors

”, analyzes Ziad Majed, professor at the American University of Paris, on

Supporting the Syrian regime has thus enabled Russia and Iran to return to the international stage and to impose themselves on the West who, since 2011, have not succeeded in putting an end to the tragedy that is playing out in Syria. “

At the appropriate time, they will replace Assad. But currently, he is the most docile,

”continues Salam Kawakibi. According to some analysts, notes

Russia would now consider ousting Bashar al-Assad and his close guard to strengthen its yoke on the country and pave the way for Western financial aid for reconstruction, thus consolidating the patronage - especially economic - of Syria vis-à-vis Moscow

Because the aid of the international community is indeed conditional on the start of a political transition that the regime refuses.

During the “electoral campaign” in Damascus, May 18, 2021. REUTERS - FIRAS MAKDESI

The failure of international diplomacy

Germany and Turkey, for example, have banned the presidential election from taking place in Syrian embassies and consulates at home. The vote for Syrians abroad took place on May 20. To be able to vote, they must have a valid passport with an exit from the official territory. In addition, the some six million refugees who have fled their country since 2011 are excluded from any participation in the poll. It should be noted that critics of the Syrian regime have also recently been scandalized by the fact that the one nicknamed "the butcher of Hama",

the brother of Hafez al-Assad, went to the Syrian Cultural Center in Paris to applause to vote in the presidential election on May 26. A protection of France dating from 1984 experienced as a betrayal by opponents of the Assad clan. "

Western members of the UN Security Council, led by the United States, France and the United Kingdom, rejected the election result in advance. A ballot which takes place "

under the sole control of the regime, without international supervision

," declared Nicolas de Rivière, ambassador and permanent representative of France to the United Nations Security Council, last April, during a monthly meeting of the Council. security on Syria. "

The failure to adopt a new Constitution is proof that the so-called May 26 election will be a sham,

Steps must be taken for the “participation of refugees, displaced persons and the diaspora in any Syrian election”. Until this is done, "

we will not be fooled,

Elections in the absence of a safe and neutral environment, in a climate of permanent fear, when millions of Syrians depend on humanitarian aid do not confer political legitimacy, but rather show contempt for the Syrian people

" , said diplomat Sonia Farrey on behalf of the United Kingdom.

adopted in 2015 requires all Syrian parties to immediately end all attacks against populations or civilian objects, and calls on the United Nations to bring the two parties together (Syrian government and opposition) to start formal negotiations and organize elections under the supervision of the United Nations, with the aim of leading a political transition.

The election on May 26 is therefore taking place only in areas controlled by the regime, i.e. two-thirds of the country.

The next Syrian presidential election will take place in seven years and many Syrians believe that it will once again be an Assad who takes the reins of power.

It is presented as the modern element of the future of Syria.

Almost 400,000 Syrians have died since 2011, when the people took to the streets to demand democratic reforms.