Chinanews client, Beijing, May 26 (Reporter Zhang Xu) After Baidu and Xiaomi, you will never think of who the next car will be.   On May 17th, Midea Group issued a notice on its official public account to announce that it will release new products related to new energy vehicles, and it will be accompanied by a looming car promotion poster. This move aroused market speculation: Does Midea want t 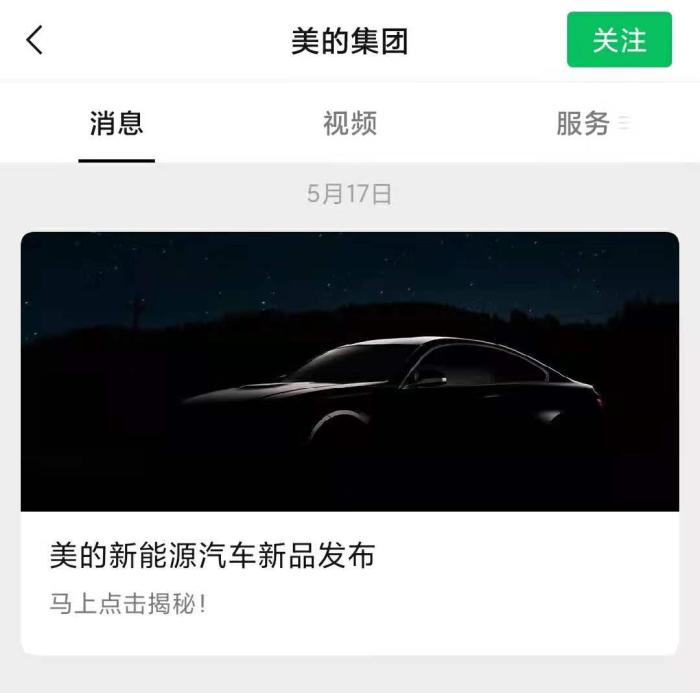 Chinanews client, Beijing, May 26 (Reporter Zhang Xu) After Baidu and Xiaomi, you will never think of who the next car will be.

On May 17th, Midea Group issued a notice on its official public account to announce that it will release new products related to new energy vehicles, and it will be accompanied by a looming car promotion poster.

This move aroused market speculation: Does Midea want to build a car?

Mobile phone factories, home power plants, TV factories...there is not the largest span of car-making, only larger. "Non-mainstream car-making forces" have entered the game one after another. Who will be the next one?

On May 17th, Midea Group issued a notice on its official public account to announce that it will release new products related to new energy vehicles, and it will be accompanied by a looming car promotion poster.

This move aroused market speculation: Does Midea want to build a car?

Midea stated that it will focus on providing auto parts to automakers. Its strategy of entering the auto industry is similar to that of Huawei, and it hopes to become the Bosch of the domestic auto industry.

However, because it was not the expected entry into the vehicle manufacturing field, the share price of Midea Group fell by 0.71%, and the capital market was not responding positively.

Many people also sigh with emotion: I thought that beautiful people would build a car, but I didn't expect it to be "lonely".

Data map: In the smart factory of a new energy electric vehicle company in Shangrao, Jiangxi, robots are working at the same time.

Midea has a painful experience behind not making the whole car.

At that time, Midea threatened to "become a leading domestic passenger car manufacturer within 3 to 5 years."

However, this car dream did not last long.

Due to misjudgments of the market and the impact of the economic crisis, in November 2008, Midea Group’s automotive business fell into a crisis of production suspension. Huang Xiaoming, then vice president of Midea Group, announced the suspension of car manufacturing projects.

In 2018, Jiang Peng, Secretary of the Board of Directors of Midea Group, stated publicly: Midea began to think about the direction of re-entering the field of car manufacturing.

As a power plant, Midea, although its main product line does not overlap with automobiles, in the eyes of the industry, it is not surprising to get involved in auto parts by virtue of its technological advantages.

Zhang Xiang, an analyst in the automotive industry, said: “The profit of key components of smart cars is higher, much higher than that of the whole vehicle. In the field of components, the profit margins of manufacturers such as Bosch and Continental have declined in recent years. High. At the same time, the industrial chain involved in manufacturing the complete vehicle is complex, the investment capital is large, and the investment return period is long. And the home appliance companies such as Midea cut into the automotive field from parts and components, and they can enter or retreat. They also urgently need to import from higher profit fields. Cooperate with Internet giants and other companies to control the "future"."

What people care about most about Midea's cars is what Gree will do?

In November 2016, Gree Electric’s shareholders meeting rejected Dong Mingzhu’s proposal to acquire Yinlong, and believed that the layout of the car was too big.

In this regard, Dong Mingzhu said angrily at the annual meeting of Chinese business leaders that Gree’s shareholders "are short-sighted and only look at the front of them."

At the end of 2017, Gree staff gradually entered Yinlong.

However, at the beginning of 2018, Yinlong New Energy was exposed to more than 1 billion yuan in payment owed to suppliers.

In May 2018, Yinlong New Energy’s listing guidance was terminated, and at the same time, its Hebei Wu’an plant reduced production on a large scale; In early June, Yinlong New Energy announced a 44% layoff of 8,000 employees; in July, Yinlong New Energy Nanjing Industrial Park There was a dispute with the owner and was sealed by the Jiangsu Higher People's Court.

In mid-2019, Yinlong New Energy finally launched a new energy MPV called "Effie", but "being able to build a car" does not mean "making a good car."

According to Yinlong, "Effie" has a cruising range of 450 kilometers and supports 2-hour fast charging.

However, the industry questioned that "Effie" is 90% similar to the Alpha MPV launched by Toyota in 2009.

At the same time, because it is equipped with lithium titanate battery technology, the battery life may actually be only about 200 kilometers.

The indicators are flat, but the pricing is quite confident. The price of "Effie" is as high as 430,000 yuan, which is catching up with many luxury brands.

According to data from the Travel Federation, the model only sold 2,708 in 2019. In the top ten sales of new energy MPVs that year, the last Geely Jiaji sales reached 29,300, and the gap is not big.

Seeing that the old rival Midea has switched to auto parts, Dong Mingzhu still cares about Yinlong, a vehicle manufacturer.

The only one "Effie", in today's new energy vehicle market, what is the chance of winning?

It is worth noting that the reporter searched Yinlong New Energy's official website and official account, and now there is no information about this "Effie" MPV, quietly coming and going quietly, as if it never existed.

The official website of Yinlong New Energy has no information about "Effie" MPV.

Skyworth Auto, to change the standard or to build a car?

One month after Xiaomi officially announced the production of the car, on April 27, Kaiwo New Energy Automobile Group (hereinafter referred to as Kaiwo Automobile) released the "Skyworth Automobile" brand.

Huang Hongsheng, chairman of Kaiwo New Energy Automobile Group Co., Ltd. and founder of Skyworth Group, personally stood on the platform: "In order to make Skyworth a brand integrating home appliances and automobiles with ubiquitous influence, I am willing to struggle for another 30 years!"

This scenario is quite similar to the situation when the official Lei Jun announced that Xiaomi built a car. Lei Jun shouted at the press conference in March, "We must suppress all our accumulated achievements and reputation."

Other new car-making forces are often questioned as "PPT car-making" because of their delay in producing cars, but Skyworth is just the opposite. Before the official announcement of the car-making, a model was already exhibited at the China Electronic Information Expo.

It sounds super powerful, but in fact this model is the Tianmei ET5 that has already been mass-produced.

In other words, at this stage, Skyworth has just changed the car logo.

Tianmei ET5 has two cruising ranges of 410km and 520km, but it takes 9.6 seconds to accelerate from 0 to 100 kilometers. Most of the new electric cars at the Shanghai Auto Show this year are within 4 seconds. Skyworth's car manufacturing is already behind the times.

It's no wonder that the ET5 has been on the market for half a year, and only 600 units have been sold. This record is far from Dong Mingzhu's "Effie".

According to Huang Hongsheng's plan for Skyworth Auto, in the future, he will invest another 30 billion yuan to become the top 10 global automakers, and cultivate a team of outstanding entrepreneurs, and then increase the market value to 300 billion yuan.

But feelings may not be able to make a good car. The first model should strive to gain popularity, but the result is only to change the label of the slow-moving model. "Huang Hongsheng may need to reflect on his own market strategy." Some people commented like this.

In 2021, after Baidu and Xiaomi built cars, home power plants and TV factories built cars, 360 built cars for cyber security, and Didi built cars for online car-hailing... just like some netizens said.的: Next, you just told me to make a car for making spicy strips, and I won't be surprised.

It's just that the "non-mainstream car making" that lacks accumulation and sincerity, in addition to attracting attention, can really bring a different atmosphere to the new energy vehicle market?