In the military escalation between Hamas and Israel, the media have become a real target. The media building in Gaza that was destroyed on Saturday May 15 by an Israeli strike was ... 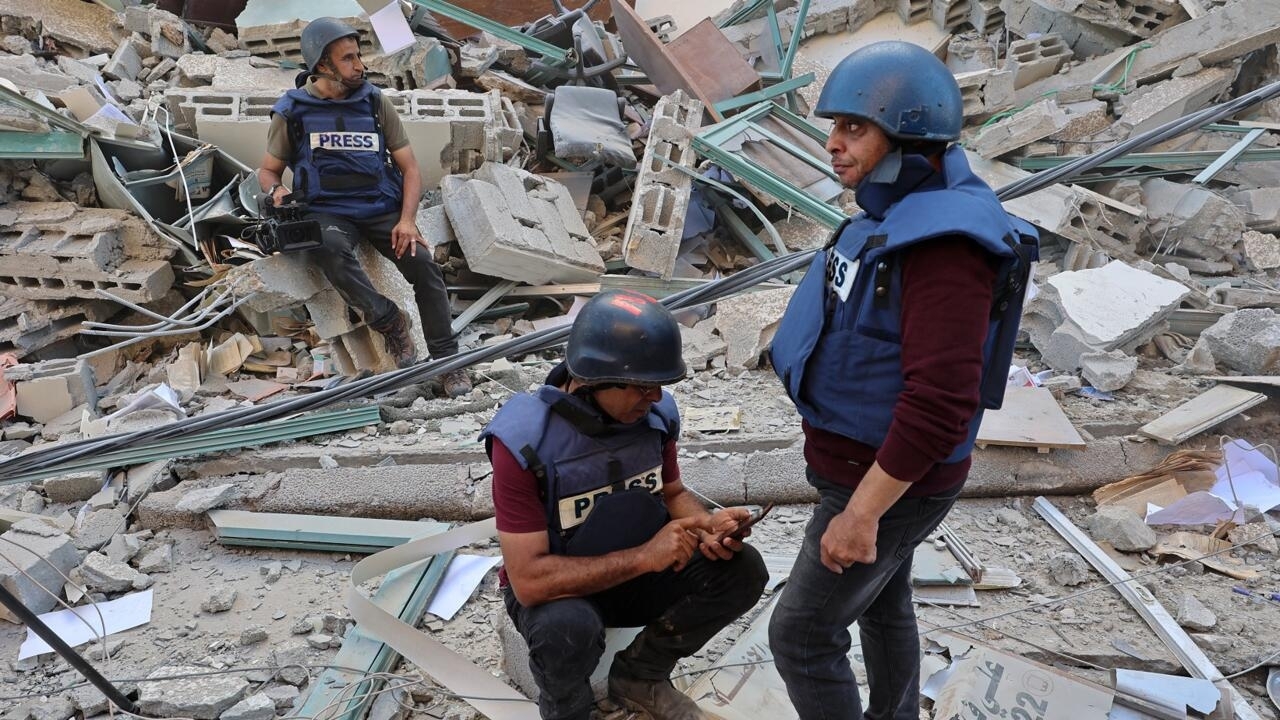 Journalists in the rubble of the Jala Tower, which housed the premises of the Al-Jazeera channel and the AP agency, in the Gaza Strip.

On May 15, 2021, the building was targeted by an Israeli bombardment.

In the military escalation between Hamas and Israel, the media have become a real target.

Uprising of combat on Saturday afternoon in Gaza.

The owner of the Jala Tower, a building housing the local offices of the Qatari channel Al-Jazeera and the American international agency Associated Press (AP), receives a call ordering him to evacuate the premises within an hour.

And spread the word to the other occupants of the building because the Israeli army is going to bomb it,

: Israel will continue its strikes on Gaza "as long as necessary", according to Netanyahu

Journalists from Gaza crowd outside, from a distance, to protect themselves, in order to film the scene.

Al-Jazeera broadcasts live, the camera staring at the building.

A missile slices through the cement and a mushroom of smoke and dust grows in the sky.

The building is no longer.

And this is not the first.

Earlier this week, towers in Gaza housing Palestinian media offices, including the

Each time, the IDF provides roughly the same explanation: the buildings served as "

" for Hamas, which used journalists as "

The building, which housed in particular the premises of the American agency AP and Al-Jazeera television, also housed "

an intelligence office for the Palestinian terrorist organization (...) which prepares and organizes terrorist attacks against Israeli civilians.

So it is a perfectly legitimate target

”. The head of the government of Israel, assuring that the country "

shares with our American friends all this information

When asked on CNN, Associated Press editor-in-chief and vice-president Sally Buzbee said she did not know what the IDF information was, saying that an "

independent investigation into what happened

" was necessary. For the director of the Committee to Protect Journalists (CPJ), Joel Simon, the IDF is "

." In a statement, the NGO Amnesty International, for its part, estimated that an "

" should be opened into a possible "

2/2 The Israeli attack on al-Jalaa building destroying homes & @Aljazeera & @AP offices must also be investigated as a war crime.

The strike fits a pattern of Israel's collective punishment of the Palestinian population.

AFP hosts its colleagues from PA and Al-Jazeera

To allow them to continue working, Agence France-Presse (AFP) offered to host its colleagues from AP and Al-Jazeera.

how the agency made the decision to host its competitors.

It's a fairly natural movement of solidarity. We help each other, especially in difficult places, he

(...) AP had thirteen employees who, to our knowledge, slept regularly in the office for security reasons. As you know, they have been warned. They had time to get out of the building. We offered to shelter them and also to pool our image streams, since we continue to film from the rooftops and we make our video and photo stream available so that they can continue to work.

Doesn't AFP fear that its offices could in turn be the target of bombardments?

There is a little bit of selfish calculation on our part.

We say to ourselves that we naturally let the Israelis know that we were welcoming the PA teams and we let it know, for example, through this interview, because we think that the Israelis will look twice before knocking on new AP teams

Middle East: new Israeli bombardments on Gaza, an American envoy on the spot

Israel to continue strikes on Gaza "as long as necessary", says Netanyahu

The "Iron Dome" in Israel